• Chincoteague is a town on the island of the same name, in Virginia’s Eastern Shore region. It’s a gateway to Chincoteague National Wildlife Refuge, on Assateague Island, which has beaches and wild Chincoteague ponies. Two herds of wild horses make their home on Assateague Island and every year Each year tens of thousands of spectators come to watch the Saltwater Cowboys swim the pony herd from Assateague Island to Chincoteague Island.  The ponies are well known locally but were made famous by a children’s book called Misty of Chincoteague by Marguerite Henry (1947), a Newbery Honor book about a family that raises a filly born to a wild horse (pony books are not as much of a thing in the US as in Britain but I read this in my elementary school library).  Some believe that the ponies were descended from horses of early settlers but a friend recently came up to me after church in great excitement to tell me there is now evidence to support Henry’s theory the horses are the descendants of the survivors of a Spanish galleon wrecked off the coast of Assateague.

• In front of the Barnstable (MA) Fire Department is a notice board inviting residents to attend a Jamfest of some kind on Wednesday’s.   My sister dared me to remove the offending apostrophe, which I did.  But I didn’t want the firemen to think I was stealing it (bad for a lawyer to commit a misdemeanor), so I tucked it into an unused line below.  Mistake!   They put it right back a few days later.  I am tempted to write to them to point out the errors of their ways . . . 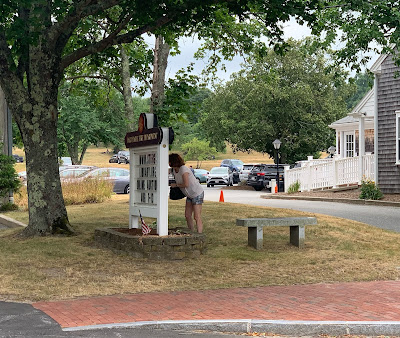 • Wintercombe by Pamela Belle (1988) is one of my all-time favorite books.  I knew it is based on a real house in Wiltshire so was excited to read the author’s story of how she was inspired to write the book.  The book is just $.99 as an eBook. 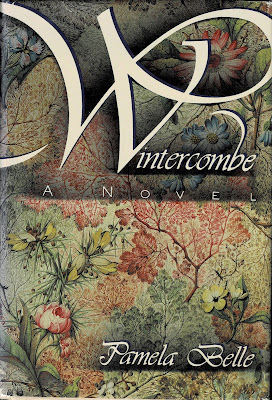 • Remarkably Bright Creatures by Shelby Van Pelt (2022).   I don’t know this book or the author (it’s about a widow's connection with a giant octopus) but I saw it in a bookstore and did a double take because I own the Swedish horse on the cover!  I believe my parents bought it back from a trip they took to Scandinavia when I was little.  Is this horse common? 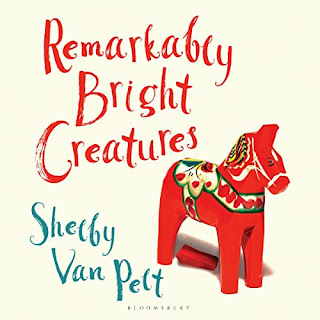 • Sad that summer visits to Cape Cod are over?  I am!  But the Cape Cod Times has some reading suggestions of new books written or set on Cape Cod and the Islands to keep you going until next year.

You are doing a good work by editing errant apostrophes! My parents have the same horse in black. My mom's parents brought it back from a trip to Sweden, I believe. I am going to go read that article from the Cape Cod Times right now. I grew up going to the Cape and miss it so much.

Thanks for the link to the Pamela Belle article. I've read the first three Wintercombe books and loved them - I'm hoping to read the fourth one soon. I enjoyed her other series that begins with The Moon in the Water too.

You know how happy I am to read that you are correcting typos in signs. In a restaurant yesterday, a sign on the men's room door said, "Out of order. Use the ladie's room." I never knew I was a ladie. Alas, I was unable to correct it at the time. But I got a great photo for posterity. :)

Wintercombe is a huge long book (which I have not read), but I got a copy on Kindle two years ago. Maybe on your recommendation.

There are two ways I can go home. One way I get to see STRAWBERRYIES. and the other, BABY CHICK’s FOR SALE. Instead of thinking about traffic I have to decide which sign I cn stomach that day!

Kelly, that is pretty funny! I have a great mental picture of you alternating bad routes.

Tracy, even though it is not your favorite genre, it is really an awesome book - well worth trying!

Helen, I started with The Moon in the Water series too. I think my mother gave me the first one for Christmas when it was new. It is fairly predictable, as I recall, but still very good.

Emily, there is a website called Apostrophe Abuse you should check out.

Jennifer, it is not that the Cape is the most beautiful vacation spot - I am sure there are many just as lovely but I do like looking at the ocean. And I especially like visiting my sister who is a good hostess and great cook. I feel bad that the she never gets to read as much as the rest of us but as I barely cook, I can't do much but get in the way.