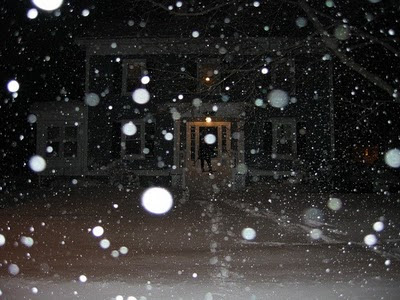 My parents moved to Newton in 1967 and it has been difficult and sad to empty the attic of the possessions of many years as they sell it this week to a young couple with toddlers. Some things were easy (moving the Georgette Heyers and Janet Lamberts to my home just under 6 miles away) and some were difficult (throwing away school papers and letters and my mother's stained wedding dress, used for dress up by her wicked offspring - I actually saved this) (I did discard one bad report card without a qualm). 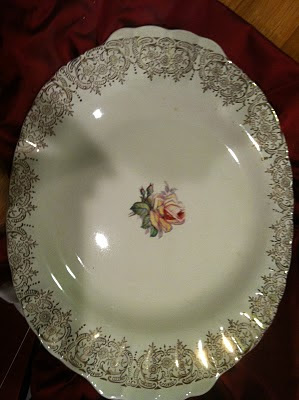 Among the surprising things discovered in the last mad rush of Downsizing the Parents, Part 2 (following their move to a condo three years ago) was a box of my aunt Lillian's china. It is a pattern called American Limoges Tea Rose with 22 carat gold trim - sadly, not really to my taste but as I am named for this aunt I will certainly save a platter and think about how she raised my father after his mother died when he was six, sending him to Roxbury Latin and to Harvard by working three jobs.
Posted by CLM

Your aunt was a special woman, Candace.

This is a nice way to pay tribute to her without being saddled with an entire set of not-to-your-taste china. Keep that one platter to remember her by (and use it!).

Good luck with the rest of the adventure of moving your parents.

Keeping a platter will be a nice way to remember her and keep her memory alive.

Keep it all! (says the pack rat) Another Martin descendant might appreciate the set some day... and will likely treasure you as much as you all treasured your aunt.

Poignant post--some things are hard to part with and some are discarded with relish! I have several platters that I've hung onto but never or very rarely use.

Nabbing the Heyers was a wise move :)

What a wonderful Aunt! It's good to keep one part of her china as a memento I think. But leaving a house that's been the family home for so long is difficult. When my mother died, she had been in her house only a few months short of 60 years. A lot of memories.