It is time for Betsy Ray’s older sister, Julia, to depart on her first step towards the Great World – her freshman year at the University of Minnesota. She shocks Betsy by saying she both hates and loves Deep Valley – “because it has held me for so long,” Julia said. “And it isn’t my native heath. Never was.” Julia plans to study music at the U but tells Betsy (and the reader) that she wanted to study in New York or Berlin but Mr. Ray thought she was too young. And as we have often speculated, how did he even have enough money from the shoe store to lavish the women in his family with summers at Murmuring Lake and college educations? Everyone within a hundred miles of Deep Valley must have patronized his shoe store. 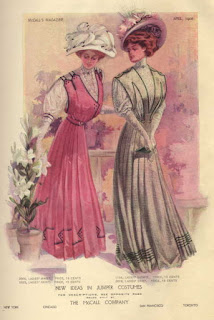 The last Sunday Night Lunch at the Rays before Julia’s departure is extra sad and extra fancy: Anna makes a towering five-layer banana cake, and Mrs. Ray even makes a gelatin salad with fruit (I didn’t know these were common until the 60s!) which almost offends Mr. Ray who thinks his usual sandwiches should be sufficient. “Anyone would think Julia was going to the North Pole!” he says, although “he felt as upset as anyone.” More people come over than usual that night to say goodbye to Julia, and she avoids sentimental favorites when she plays the piano, instead playing a lively new barn dance song:

For those who have not yet bought the Betsy-Tacy Songbook, you have a treat in store! It is a magnificent look at many of the songs featured in the books.

The Rays go out for a goodbye dinner Monday night at the Moorish Café where they are joined by Mr. and Mrs. Poppy. Julia’s trunk is already on its way to college and when we learn that Betsy and Margaret get out of school early on Tuesday although the train to Minneapolis doesn’t leave until 4:45, it seems a bit excessive but keep in mind that this is a big event - few women in this era pursued higher education (and if there were local options, they stayed close to home, as did Tacy’s sister, Katie, who enrolls at the German Catholic College in Deep Valley). Julia’s departure for college is not only an opportunity for Betsy to step up and out of the middle sister role, but also provides a source of news from the big city when Julia zips home on a quick trip due to (surprising in her) homesickness. She tells the Rays about sororities on campus, how the older girls had welcomed her, and describes all the fun she has heard about from them – “They give marvelous parties and invite the fraternity men. And the fraternity men give marvelous parties and invite the sorority girls.” Mr. Ray asks how the people who don’t belong have any fun (sarcasm from Bob Ray?!) and Julia replies that she has no idea. “You simply have to belong to a fraternity or sorority if you want to have any fun.” In a way, it is surprising that Julia, a confident leader in Deep Valley is susceptible to the flattery of strangers, but it sounds very enticing and when I first read this book I was as agog as Betsy and Mrs. Ray to hear all the details. Had I had more responsive junior high classmates, I am sure I would have tried to start a sorority myself!

During Julia’s brief visit home, “they talked sororities at every spare minute, especially when Tacy and Tib were around. Julia was given to enthusiasms and she knew how to communicate them. The Epsilon Iota house became in her description an enchanted domicile. The various Epsilon Iotas – the dark, queenly one, the red-headed one, the twins, the stunning blonde – moved through Betsy’s head like characters in a romance.”

The University of Minnesota Old Campus Historic District, listed on the National Register of Historic Places, includes a number of buildings on the Minneapolis campus that date back to the oldest days of the university.  Who knows which of these old buildings is still in use?  Take a look at Shevlin Hall, which was the headquarters for women students at the U when Julia and later Betsy were students. It provided a dining room, and places where the women could hang out and study between classes, and likely meet with their advisors.

Student life was certainly more than sorority rush, and as Mr. Ray pointed out, they were supposed to be studying! You will remember than the Merry Widow Waltz was a sensation sweeping across the country in Betsy in Spite of Herself, when Betsy and all her friends started wearing very wide hats. The craze had continued and co-eds at the U were scolded for wearing their hats to class, which prevented the instructors from seeing what the girls in the back row were up to (reading interesting books instead of taking notes, according to this Minneapolis Tribune article from November 1908). Here is another article on the Merry Widow hat by my talented acquaintance Evangeline Holland that you will enjoy (she really needs to read some Betsy-Tacy).

When you think that Vera Brittain (beloved by me since adolescence), born in 1893, a year after Betsy, was living in Derbyshire as Betsy is growing up in Deep Valley, desperately trying to persuade her parents to let her study at a decent school so she can take the entrance exam for Oxford, while Betsy is passing notes in class and these girls at the U are ignoring their professors… but I am getting ahead of myself. Still, it is worth remembering that access to a university education appears to be taken for granted by Betsy and many of her friends but was not common in Britain for several more generations.  A movie about Vera starring actress Saoirse Ronan is planned. 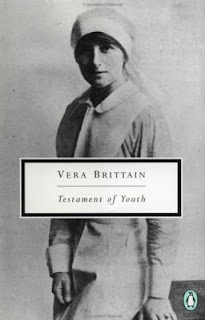 With hindsight, it is easy to recognize that sororities are not the best idea for Deep Valley High, but Betsy has loyally followed Julia in many activities – joining the Episcopalian Church, flirting with boys, learning to play the piano – at first it doesn’t seem that different from the other clubs Betsy, Tacy and Tib have started. I am the eldest in my family but for those with older sisters what are some of the reckless things your sisters inspired?
Posted by CLM

Re Vera: if you can get hold of the dramatization of Testament of Youth that was shown on PBS in the 80s it is so worth watching (Constance, you saw it, right?) BWAJ did not inspire me to want to attend the U but I refused to attend any college that had a Greek system specifically because of BWAJ. I agreed with Bob Ray that the taxpayers should not be subsidizing such an exclusionary system. I still do, and when one reads the newspapers today, Bob's wisdom is proved over and over again.

I do indeed love the PBS Testament of Youth. Michele owns a copy - we may have to have a re-viewing party.