Plot:  When Marian Rayne breaks her engagement to Lindsay Trevor a few days before the wedding, he is devastated. Everything is suddenly meaningless, including his job at a respected publishing house, which means it’s exactly the right moment for the mysterious Benbow Collingwood Horatio Smith to ask, “How would you like to die for your country?”  Wentworth fans know that Mr. Smith works discreetly in espionage for Britain and plays an important deus ex machina role in four books.   Here, he persuades Lindsay to disguise himself to take a job as private secretary to a flamboyant millionare, Algerius Restow, suspected of organizing a subversive movement to cause a war.  Just when Lindsay thinks Marian is gone from his life forever, he learns she is being blackmailed – but how can that be related to his investigation? 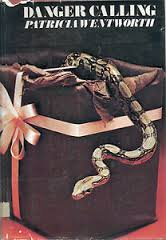 What I liked:  Lindsay Trevor is young and relatively serious; he served his country in the War and has written a well-regarded book.  When Mr. Smith first propositions him, Lindsay is intrigued:

The whole business had a lure, and in other circumstances he would probably have jumped at it.  As it was –
“You’re offering me a job of some sort – a dangerous job?”
“Well—“ said Mr. Smith in non-committal tones….
“I’m afraid, sir, that I have got a previous engagement”….  Lindsay hesitated, and then put himself out of temptation’s way. “I’m being married next week, sir.”

A newly married man is not expected to risk his life for God and country but after the painful breakup with Marian is properly announced in the newspaper (now, I suppose the bride could merely change her Facebook status), Mr. Smith reaches out to Lindsay again and this time he accepts the assignment.

Lindsay’s finances are never mentioned but Marian is the heiress to an affluent uncle so he must be comfortably off or he would surely have been considered a fortune hunter.

What I disliked:  Well, it’s hard to like a hero named Lindsay, but how was Wentworth to know it would become primarily a female name?  The actual plot of this book is kind of silly, and Marian never comes to life as a character.  Even Lindsay does not have the sparkle of some of Wentworth’s later male characters – this book was written quite early in her career.  It is primarily the Miss Silver books that have been reprinted many times which is why this one is impossible to find.  Or is it because the story is so weak it was seldom reprinted?   Finally, I disliked all the snakes in the book.

Source:  I got this from the library while on vacation; I think it is one of the last copies in the country.  Thank you, CLAMS!


Click here for my other posts related to Patricia Wentworth.
Posted by CLM