Plot: As in the Jane Austen novel that inspired this book, when Mr. Dashwood dies, his estate passes to his son, John (and son’s detestable wife Fanny), leaving his second wife and their three daughters virtually penniless.  John ignores the promise he made his father to support his relatives and feels put upon rather than guilty.  Belle Dashwood has no choice but to move with her three daughters, Elinor, Marianne, and Margaret, to a small cottage in Devon on the estate of a generous Dashwood cousin, Sir John Middleton.  It is Fanny’s much nicer brother Edward who comes up with this plan, and of course, he is Elinor’s love interest (it is a pity I see Hugh Grant’s perpetually slack-jawed face when I think of Edward Ferrars) while her overly-emotional sister Marianne is enamored of local bad boy John Willoughby.  Once settled in their new home, Elinor is assisted in finding a job by Sir John’s kind friend, Bill Brandon, who yearns for Marianne although he and Elinor have far more in common.  The family’s financial concerns are acute but no one seems to pay any attention except sensible Elinor, and even she is consumed by love. 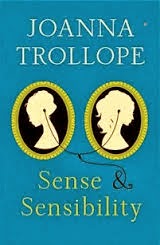 What I liked: I have been reading Joanna Trollope since the early 80s when she wrote historical fiction under the pen name Caroline Harvey: Leaves from theValley and Parson Harding’s Daughter, among others.  Then in 1995, a miniseries was made in the UK of a contemporary novel called The Choir which she had written under her real name.  That put her on the map.  Even a CD of music from the series became a bestseller.  I enjoy her contemporary fiction, which is more upscale than Helen Fielding and such imitators.   Unlike her illustrious great-great-great-great-great uncle, her books are not connected and for the most part reflect relatively normal situations among the late 20th or early 21st century British middle class.  I listened to her most recent, The Soldier’s Wife, about a family coping with the rigidly military father’s return from Afghanistan, about a year ago.  Trollope really understands family life and interrelationships, and reveals her keen insight to the reader by creating vivid characters and showing us what they are thinking.

The real Sense & Sensibility was published in 1811. At that time, young ladies of gentle birth such as the Dashwoods had virtually no career options.  The difficulty of using this plot in contemporary fiction is that one wonders exasperatedly why Elinor and Marianne and their mother can’t get jobs.  Trollope deals with this by having Marianne barely out of secondary school and Elinor in the middle of an architecture degree.  I guess it had been a long time since I read the real book: I had completely forgotten the youngest sister, Margaret.  She is a complete pain in this book, seeking attention and making no effort to economize.  Of course, Marianne is also annoying but I appreciated her use of 21st century technology: checking Facebook compulsively to see if her married ex has changed his status from ‘single’. 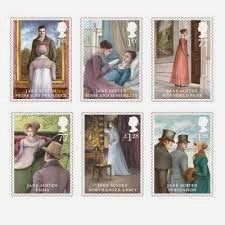 Jane Austen is everywhere and her popularity shows no signs of ebbing, as Joanna Trollope has noted.  England finally recognized her with stamps in early 2013.  Even Nightline sent one ofits goofier reporters to a Jane Austen convention the other night and pointed out how intellectual her fans are.   Trollope also recommends several books about Austen for those curious.

What I disliked: It's not that I don't enjoy Austen-inspired fiction -- in fact, I actively seek it out, and enjoyed this book very much but it does somehow seem a waste of Trollope's talent.  On the other hand, I suppose she is coming full circle, given the first books of hers that I read were Austen-inspired historical fiction set in the early 19th century.  This book is part of The Austen Project which is assigning six contemporary authors to rewrite Austen (create Austen homages?).  Next will be Val McDermid with her own version of Northanger Abbey.  That should be interesting given her usual dark style.

Source: I received an advance reading copy of this book from HarperCollins in return for a fair review.
Posted by CLM

I've never read anything by Joanna Trollope, though I'm thinking I would enjoy her work, but this particular one just doesn't appeal to me. Maybe it's because I've already read 2 modernizations of S&S in the past couple years and sort of have my fill of the basic story, and I'm not fond of the idea of the Austen Project anyway. Seems a bit forced to me

I enjoyed your review though.