Another Place Another Spring (Book Review)

Plot:  No one asked Marya Breshnevskaya if she wanted to accompany Countess Elena Temkova to Siberia, escorted by the harsh police Captain Boris Branov, but loyalty to her former master binds her, although she learns  that Elena and her mother are not worthy of her devotion.  Marya, a peasant from the Ukraine, was brought up more as a companion to the young Countess in St. Petersburg than as a servant.   Then, five years ago, Elena’s father was exiled to Siberia for his support of the Decembrist Revolutionaries, and now Elena’s mother has turned in her own daughter to the imperial secret police for cherishing her father’s letters.  More surprising, however, is Marya’s growing recognition that Branov is not her enemy as they share a dangerous yet intimate journey to Siberia, encountering foes and friends along the way. 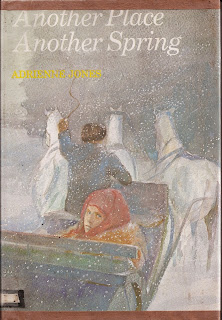 What I liked:  This book reminded me of two much beloved books from my childhood, Masha and The Youngest Lady inWaiting by Mara Kay, also set in 19th century Russia (I was delighted to come across this link to background on Kay).  Masha is gently born but brought up almost in peasant poverty until her mother sends her to the Smolni Institute to be educated (tragically, ensuring a better life for the daughter she will never see again).  Later, she too, like Marya (even their names are the same), is caught up in the Decembrist Revolt.  In contrast, Marya is a serf’s daughter rescued by Count Pavel Temkov when she was orphaned, brought up generously by him practically as a lady, but never considered anything but a servant by Elena or her mother.  Both are brave young women, set apart from their peers, forced to rely on themselves for survival.  And you know I love books about orphans.

One is conditioned to expect a book about an aristocratic heroine, but Marya is the unexpected but admirable character who knows – as does the reader –  that her ungrateful mistress will not survive imprisonment without her.  The book took unexpected turns: I was really surprised to read about the 1812 Russian settlement at Fort Ross, California, which continued until early 1842 (and didn’t really believe in it until I looked it up).  For those interested in 20th century exile to Siberia, I recommend The Endless Steppe (which even has a Betsy-Tacy connection).

What I disliked:  There were a lot of very sad scenes, bleakest of which is when the spoiled Countess prevents Marya from sharing in the reunion with her father, the exiled Count Pavel. In addition, it is a bit hard to imagine someone escaping from Siberia, penniless, and winding up in California but that is what fiction is for.

Source: This book was recommended by author Sophie Perinot, and I got a copy via Interlibrary Loan from Fitchburg, MA.  It is one of those crossover YA historicals will satisfy an adult historical reader, and was definitely worth the wait.
Posted by CLM