What to Read in a Blizzard or During the Long Winter

My part of Boston got about ten inches of snow yesterday so it's the perfect time to recommend some winter favorites!  These are books that would make you feel the cold even if it were a warm July day.

Little Bear by Else Holmelund Minarik (illustrated by Maurice Sendak) - This is one of the first books I remember, and I can hear my mother's voice reading to me:  It is cold.  See the snow. See the snow come down.  Little Bear said, "Mother Bear, I am cold. See the snow.  I want something to put on."

Snowbound with Betsy by Carolyn Haywood - Several years before I encountered Betsy Ray, I had met this other Betsy, an outgoing girl with pigtails and (later in the series) a little sister named Star.  I read every book by Haywood several times and even named my Teddy Bear after a minor character.  In this book, a storm cancels school the week before Christmas and some travelers are stranded at Betsy's home. 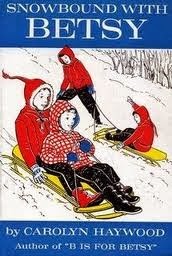 Winter Cottage by Carol Ryrie Brink - A father and two daughters, down on their luck, appropriate a Wisconsin summer cottage when their car breaks down.  The father tries to repair their fortunes by entering contests while teenage Minty yearns for a permanent home.  Along with Two are Better Than One, this is my favorite Brink.

Winter Holiday by Arthur Ransome - Perhaps my favorite of the Swallows & Amazons books.  No camping, the Amazons have the mumps so are snowbound, but that doesn't mean there are no adventures as snow and ice abound.  Dick and Dorothea are introduced as characters and earn their place in the group.

The Snow Ghosts aka The Snow Storm by Beryl Netherclift - A snowstorm paperweight takes three children visiting their aunt back in time to help save their ancestral home, Farthingales, from foreclosure. 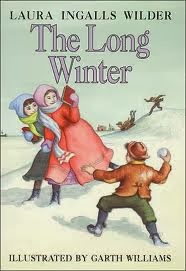 The Long Winter by Laura Ingalls Wilder - No list of cold-themed books is complete without this one but you already know that, especially if you are participating in a group read with the Maud list!  This was already a favorite of mine in 4th grade when we were given the assignment of mocking up a newspaper based on a book.   Somewhere, I am sure I have some stapled pages with a headline, "Wilder and Garland Deliver Wheat - Save Town!"

Winter Shadows by Margaret Buffie.  This Canadian author is well worth hunting up, and your library can get it via ILL if you can't find it elsewhere.   Two Canadian girls, in the same house but separated by 150 years, are drawn together by the same unhappiness in this compelling timeslip involving wicked stepmothers, prejudice, and the loneliness of a cold winter.  See my earlier review.

And Both Were Young by Madeleine L'Engle - My favorite book by this beloved author is set in Switzerland.  Lonely, artistic Flip hates being separated from her father but learning how to ski and making friends with mysterious Paul help her endure the mean girls at her boarding school.  I read this for the first time the week my sister Andrea was born, one cold December (mumble) years ago. 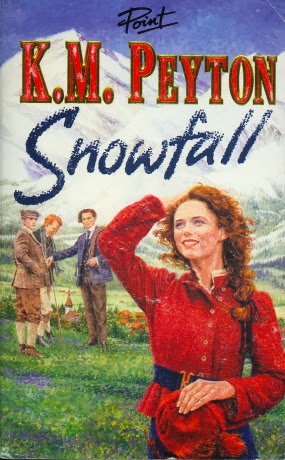 Snowfall by K. M. Peyton - A lesser known historical YA by this author.  When Charlotte's grandfather tries to arrange a marriage for her, she escapes by going mountain climbing in Switzerland with her brother and his friends.  Peyton's depiction of the snow and Alps is as mesmerizing as Charlotte's coming of age.

Winter Shadows by Margaret Buffie - A time slip set in a Western Canada that is so cold you will shiver while reading it.   Two young women, one in 1856 and one in the present, communicate through a diary and an old brooch, as they try to deal with difficult family situations.  My review is here.
The Lion, the Witch, and the Wardrobe by C.S. Lewis - “It is winter in Narnia,” said Mr. Tumnus, “and has been for ever so long…. always winter, but never Christmas.”   After Lucy goes through the wardrobe and meets Mr. Tumnus, she and her siblings begin their adventures in Narnia.
Adult:

The Colours of Snow by Kate Fenton - This is chick lit about a London artist who rents a cottage in the depths of winter in North Yorkshire so she can paint uninterrupted.  Naturally, there is a male interruption.  There is lots of snow but she mostly stays inside and eats chocolate.

In the Bleak Midwinter by Julia Spencer-Fleming - This is the first in an award-winning mystery series set in upstate New York and it radiates cold!  Claire Fergusson is an Army chopper-pilot turned minister who encounters mysteries every time she turns around.  I am sure I have introduced dozens of people to this series, which I highly recommend. 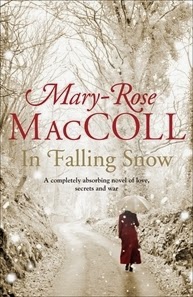 In Falling Snow by Mary-Rose MacColl - I don't remember who recommended this to me but historical fiction about nurses and  lost love and secrets from WWII is right up my alley.  It has been on my windowsill for a couple weeks waiting for the right moment.

The Winter Siege by D. W. Bradbridge - I read about this book on the Historical Fiction BookTour: 643. As winter closes in around the town of Nantwich, the civil war that rages across the country, threatening to tear England apart, is yet to reach the town’s gates. But while the residents wait, eyeing the outside world with unease, they face a deadly threat from within: Townspeople have started dying – murdered – the red sashes of the royalists left on the bodies marking them as traitors to the parliamentary cause. It falls to Constable Daniel Cheswis to contain the bloodshed, but with few clues and the constant distraction of war, can he protect the people of Nantwich?

My favorite snow-oriented book from when I was a kid was Snow Treasure, by Marie Mcswigan. I thought it was thrilling and I read it several times as a child and then bought it for my own kids, and reread it and loved it all over again.

I know many people rank The Long Winter among their favorites of the Little House series, but I always find it a bit of an ordeal to read.

I really like Flambards, both the mini-series and the book, but didn't know Peyton wrote anything else.

Bleak Midwinter is a great start to one of my favorite mystery series--great characters and location.

(Diane) Bibliophile By the Sea said...

What a great list of snow-falling titles. I can't wait to see your boarding-school list (love that setting).