Night is the Hunter (Book Review) 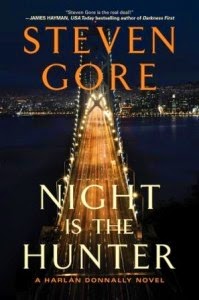 Plot: When San Francisco Police Detective Harlan Donnally got caught in a rival gang confrontation and took a bullet, the injury forced him into retirement and he now runs a small cafe in Northern California. But when Judge Ray McMullin asks him to look into a 20 year-old case in which the defendant is facing the death penalty, Donnally soon realizes the case is related to the incident in which he got shot.  While he explores the recollections of those involved and learns that the underlying investigation was flawed, he also becomes consumed with a family issue: whether his father, a well known movie producer, has Alzheimer’s.  As Donnally gets closer to the truth, he becomes afraid that Judge McMullin may similarly be suffering from ominous memory lapses, and wonders whether his current quest for the truth is legitimate and worth pursuing.

What I liked: This was a fast paced and unusual story with a vast array of characters from judges, police, lawyers, gang members, and long-suffering family members. It explored a little-considered concept: whether judges and lawyers are haunted by the death-row cases they preside over/litigate and what options, if any, are available if they have misgivings about the course of justice. These issues are relevant to everyone affected by the justice system although (unsurprisingly) those who favor the death penalty will likely be unswayed by the varying elements of murder and to what degree a defendant’s actions were deliberate.

Author Steven Gore is a private investigator and his knowledge of the process adds dimension to the story, although Donnally gets a lot more cooperation than I would have expected for someone with no authority to conduct an investigation.  You can visit Gore on Facebook or on his website.

What I disliked: I am a big fan of suspense and even before I was a lawyer, I enjoyed legal thrillers, but I had a hard time keeping the characters and gang members straight.  Donnally himself wasn’t the most engaging of characters. I didn’t care for the sub-plot involving Donnally’s father which seemed very heavy handed. However, maybe it would have made sense or seemed more convincing if I had read the first two books in the series, so I will now go back and try Act of Deceit.

Source: I received Night is the Hunter from the TLC Book Tours and invite you to visit other stops on the tour to read other reviews of this entertaining book.
Posted by CLM

I'm glad to see that you enjoyed this enough to go back to read the previous books - for me, that makes all the difference in my ability to connect with characters in a series.