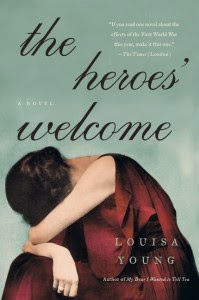 Plot:  Second in a trilogy, The Heroes’ Welcome follows the stories of two couples whose relationships suffered during WWI and are now challenged by post-war adjustment.  In My Dear I Wanted to Tell You, Nadine Waveney became friendly with poor but relatively honest Riley Purefoy through a painter who teaches Nadine and employs Riley when they are both children.  As Nadine reaches adolescence, her mother decides her friendship with not-our-class Riley should not be encouraged but it is too late, they fall in love.  However, other factors result in Riley joining the army without a word to Nadine or his family and being sent to the trenches.   In France, his superior officer is well bred Peter Locke who married a suitably lovely young woman named Julia.  Riley survives the war long enough to be made an officer (American readers may not understand that it was practically unheard of for an unlisted man to be so elevated but the incredible loss of life in the trenches required a fresh supply of officers) and develops a sort of friendship with Peter before he is severely wounded.  His face is destroyed and he is sent to a hospital on the outskirts of London where the father of plastic surgery, Major/Doctor Harold Gillies, does his best to restore Riley’s health.  Riley’s nurse is Peter’s cousin Rose, for whom war work has provided meaning and self respect previously absent in her life.   Riley breaks off his relationship with Nadine to spare her being tied to a man without a face but, loyal and determined, she eventually tracks him down and convinces him she loves and does not pity him.

Where Riley has horrendous physical injuries, Peter returns intact but suffering from post-traumatic stress disorder before such psychological damage is recognized.  His well-intentioned but not very wife suffers most from his deterioration.  The five characters become inextricably connected not simply through the men’s service together in France but when Nadine, visiting the hospital at Sidcup, becomes friendly with Rose and Julia, who live nearby.

In The Heroes’ Welcome, Nadine and Riley marry, to the distress of her affluent family and his poor one.  This bothers Nadine more than Riley, who has a fairly cold personality.  After some angst, their relationship develops well.  Peter and Julia have a much more difficult time.  Julia is recovering from a bizarre episode in the previous book where she undertook a treatment to preserve her beauty which involved washing her face with acid.  Her husband is indifferent, her three year old son is unnerved by her mood swings, and cousin Rose (the most interesting character) is pursuing an opportunity to become a doctor (although this is underdeveloped).  Rose is the only person who seems to recognize that Peter needs help and is potentially violent, but he is cruel and dismissive to her and basically rapes his wife when he can bring himself to touch her.   Riley has difficulty settling back into post-war life, primarily because his face prevents him from obtaining a job, but he makes some friends and starts a publishing company, aimed at providing helpful information to former soldiers trying to enter civilian life.  As Nadine and Riley’s lives approach normal, Peter becomes more and more psychotic and his relationship with Julia seems doomed to failure.  You must read the book yourself to learn what happens to these five tortured characters.

Audience: Fans of historical and/or Edwardian fiction, those interested in World War I.

What I liked:  I have avidly read books set during World War I since childhood and had these two on my Goodreads list.  Young does a good job at showing how war changes people and that merely staying alive is not enough -  how difficult it can be for survivors to resume everyday life and the extent to which their families suffer with them.  There is also a great contrast between someone like Peter with invisible wounds, whose family background and finance afford him the luxury of becoming a recluse and drunkard while disfigured Riley is unwilling to be supported by his in-laws and is determined to find honest employment.  Riley seems to be ahead of his time in expecting the government to take a modicum of responsibility for its veterans, not that I disagree.

Fans of Downton Abbey may enjoy this series but I recommend beginning with the first book, My Dear I Wanted to Tell You.  If you are interested in shell-shocked soldiers, you might instead read the beautifully written Regeneration by Pat Barker.  For a look at another unequal (but more joyful) romance between an aristocratic young woman and a working class man, I recommend Kissing Kin by Elswyth Thane. If you simply miss Downton Abbey, try a book from my DA recommended list.

What I disliked: I had mixed feelings about these books.  Of course, I understand that Peter’s guilt at leading men to their deaths has prevented him from resuming a normal post-war life but his vicious behavior to his wife and neglect of his three year old son makes him a very unsympathetic character, and I did not enjoy reading about him.  It is also hard to sympathize with his wife, due to her treatment of their vulnerable son.   I was beginning to dislike Riley as well, but enjoyed the descriptions of his publishing venture.  Nadine and Rose were the most congenial characters, and Rose’s medical studies would have interested me because of my fascination with women's war work.  One hopes this will be covered in the third book.

Source: I received The Heroes’ Welcome from the TLC Book Tours and invite you to visit the tour to read other reviews:

Thanks for sharing your thoughts on this book for the tour.