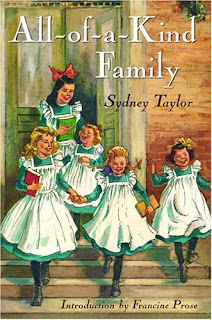 Plot: The All-of-a-Kind Family lives on New York’s Lower East Side not long before the outbreak of World War I. Papa is a peddler and Mama manages the home and five daughters as frugally as possible, while promoting their Jewish faith. Ella is the oldest, Henny the boldest, Sarah the thoughtful future writer, and Charlotte and Gertie are the youngest and eat penny candy in bed. The girls share adventures and due to loving parents and a spirit of adventure do not dwell on their poverty or the challenges of living in a crowded tenement. Their enjoyment of activities together and their ability to find fun out of simple tasks such as dusting, shopping, visiting the synagogue on festival days, or even suffering from Scarlet Fever at the same time, is what makes this book and the whole series exceptional, charming, and memorable. 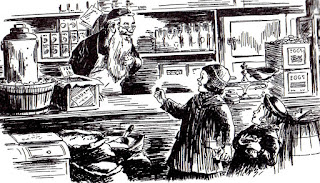 Quiz: Which All-of-a-Kind-Family Sibling are you?

You got: Sarah
There’s no place you’d rather be than the library, except maybe onstage accepting the history prize. Maybe you’ll grow up to write a book about your family history! Sydney Taylor would be proud.

Audience: Children 6-10, as well as fans of historical fiction and series books such as Betsy-Tacy; those interested in Historic Manhattan and/or Jewish family life at the turn of the 20th century. This book has many fans of all ages and religions and was “voted” #55 on Betsy Bird’s top 100 Children’s Novels. 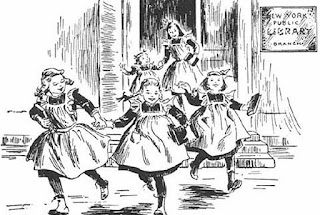 My Impressions: I loved this series growing up and especially identified with Henny, the outspoken daughter who (in a later book) gets into difficulty when she borrows her sister’s best dress without permission. This book begins with Sarah’s lost library book, another memorable incident, because of the girls’ enjoyment of the library and fear that they will lose access because Sarah lent to book to a friend. Miss Allen, the librarian, recognizes that payment for the book would create hardship but also knows the girls’ parents would not accept charity, so she allows Sarah to pay for the book over time. As a child who did not get an allowance, I was fascinated by the girls’ daily penny allowance and the mileage they got out of their pennies – particularly the feast of chocolate babies and broken crackers. Growing up in a Boston neighborhood that was primarily Jewish, I also enjoyed learning about Passover, Purim, and other festivals so meaningful to this family. Taylor makes the point that celebrating the Fourth of July is also important to the All-of-a-Kind family, their parents and friends, and that Papa is friendly with men from other faiths (Italian and Polish peddlers). Taylor also makes it clear that this family is relatively privileged: they have a four room apartment which occupies an entire floor in a two-storied private home.

About 15 or so years ago, the Greater NY Chapter of the Betsy-Tacy Society (which meets regularly), all fans of AoKF, went on a tour of the Tenement Museum on the Lower East Side, which I highly recommend (I was annoyed that the tour guide did not know about these books, and I thought they should have been for sale in the museum shop.   The first book is now available on their website).  A number of my Jewish friends loved these books because there were few books featuring Jewish children; however, I am Catholic and enjoyed them just as much as they did due to Taylor's incredible storytelling.

About the Author: Sydney Taylor based these books on her childhood and the Sarah character on herself. She was a camp counselor in Long Island (where my dear friend Rachel Rose and her sisters were campers) and probably honed the stories there before turning them into books. After her death, her husband established The Sydney Taylor Book Award which is now awarded annually to outstanding books for children and teens that authentically portray the Jewish experience. 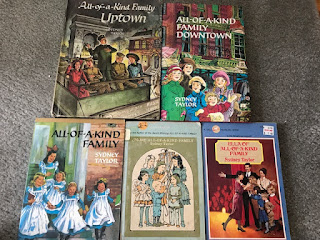 Source: I read the first three books repeatedly growing up. The first two were oversized Follett hardcovers in my grade school library, shabby from the grasp of many hands. The others were in the Newton library, although Ella was not published early enough for many rereads. I own all five now. Much of my knowledge about Judaism came from Sydney Taylor and Gladys Malvern’s Old Testament historical fiction. If you have never read this series, you have a treat in store! Thank you to Lizzie Skurnick for her efforts to keep these books in print and for the quiz above.

images above are copyright to the publisher
Posted by CLM

Thanks for joining in with the 1951 club - and with this book, which I've never heard of. It sounds so fun!

I finally read the first book a couple of years ago and it was lovely! I would have enjoyed them as a child but somehow they never came my way.

I loved this book as a kid and I recently re-read it and still enjoyed it. I particularly enjoyed books when I was a child like this; the kind that transported me to another time and culture.

Constance, the Rossie library had the three originals in the large editions and I read them over and over. They are high on my list of the great American children's books, with the Little House and Betsy-Tacy books, and Louisa Alcott.

Today is Purim,
tomorrow no more,
give me a penny
and show me the door...

I loved these also and I did have my own Dell paperback copies which I read over and over. I don't know if I read all five volumes or just the first four -- I don't remember reading the last one, but by then I may have been too old and moved on to trashy teen books.

Ooh - I've never heard of this series. It is fascinating re-reading books from childhood and trying to work out what appealed or entranced you at the time. I liked Milly Molly Mandy - one extended family living under the same roof and a slower pace of life. What a great choice for the 1951 meme .... I'm a bit late to the party but if you want to read my reviews they are here http://luvviesmusings.blogspot.com.au/