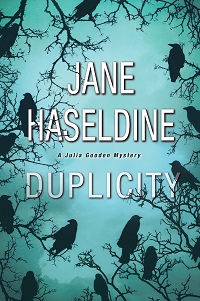 Plot: In Jane Haseldine’s second book about Julia Gooden, the Detroit newspaper reporter is up against the city’s most devious criminal—and her own painful past.

Julia Gooden knows how to juggle different lives. A successful crime reporter, she covers the grittiest stories in the city while raising her two young boys in the suburbs. But beneath that accomplished façade is another Julia, still consumed by a tragedy that unfolded thirty years ago when her nine-year-old brother disappeared without a trace.

Julia’s marriage, too, is a balancing act, as she tries to rekindle her relationship with her husband, Assistant District Attorney David Tanner, while maintaining professional boundaries. David is about to bring Nick Rossi to trial for crimes that include drug trafficking, illegal gambling, and bribery. But the story becomes much more urgent when a courthouse bomb claims several victims—including the prosecution’s key witness—and leaves David critically injured.

Though Julia is certain that Rossi orchestrated the attack, the case against him is collapsing, and his power and connections run high and wide. With the help of Detective Raymond Navarro of the Detroit PD, she starts following a trail of blackmail, payback, and political ambition, little imagining where it will lead. Julia has risked her career before, but this time innocent lives—including her children’s—hang in the balance, and justice may come too late to save what truly matters…

“Haseldine (The Last Time She Saw Him, 2016) uses her experience as a crime reporter to bring authenticity to this exciting and gritty tale.”—Kirkus Reviews

Praise for the first Julia Gooden Mystery, The Last Time She Saw Him

“A ferocious thriller….you can bet no one will stop reading.”– Booklist

“Journalist Jane Haseldine’s debut novel rings with authenticity as she, like Julia, is a former crime reporter. This is a harrowing read.”– BookPage

“A sharp, breathless thriller. From the opening scene to the last, The Last Time She Saw Him, kept me flipping the pages. I loved it! Jane Haseldine is one to watch!” —Lisa Jackson, #1 New York Times bestselling author

Audience: fans of writers such as Hank Phillippi Ryan and Allison Brennan

My Impressions: Once I got past the brutal beginning, I enjoyed this fast paced novel about a reporter committed to her job who also loves her sons and is trying to work things out with her estranged husband. An added complication in her life is that Julia is trying to cover a high profile trial her husband is litigating as an Assistant District Attorney. In addition, Julia has never recovered from the kidnapping of her older brother 30 years ago, and this has made her understandably overprotective of her children. Julia is fortunate that she has good friends in the police force who look after her and feed her scoops, as her husband is ambitious and not risking leaks to his wife that would damage his career.  I liked the unusual Detroit setting and the quirky characters.

Although this was book 2 in a series, something I normally avoid (and admonish people regarding!), it was not necessary to have read the first book to enjoy this one.  For the most part, Julia is an appealing character, smart and courageous, although has a habit I find annoying of recklessly putting herself in danger (for example, jogging to a drug lord’s secret home believing a knife in her waist pack will be protection against a bunch of murderers with guns) yet emerging with barely a scratch. For a parent devoted to her children, this was foolish behavior, although I realize it can sometimes advance the plot. However, towards the end I was distracted from Julia’s foolhardiness as the plot got a little crazy and extremely improbable, requiring quite a bit of suspension of disbelief as various twists were revealed.

Source: I was provided a pre-publication copy of this book by the publisher for review purposes. Please visit TLC Book Tour’s Duplicity blog tour: