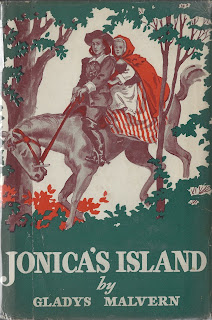 Plot: Back in 1660 when New York was Nieuw Amsterdam, a struggling settlement on the edge of the wilderness, Evanthus and Hielke Van de Voort were raising a family of six boys. When 13 year old Jonica Kleiger’s ne’er do well father is banished from the village for repeated drunkenness, Jonica is threatened with the almshouse.  Gerrit, her only friend, tells his parents of her situation and they decide to take her as an indentured servant to help Hielke in the kitchen.  Grateful to be spared disgrace, Jonica vows to work her fingers to the bone for a family she has always admired. Slowly her sweet personality and work ethic win over everyone but the grumpy eldest brother but Jonica’s newfound happiness is threatened when her father returns and tries to blackmail her into robbing her benefactors.
Falsely accused, she is banished from Nieuw Amsterdam, forced to serve Willem and his unpleasant wife on their rural homestead, nearly 100 miles north of the Dutch settlement.  Months of hard work pass with no warmth and little conversation, and Jonica has only memories of handsome Gerrit’s kindness to keep her going.   However, when she learns the Van de Voort family is in jeopardy, this brave young woman jeopardizes her indenture by making her way back home on foot, determined to repay the debt although it means dodging Indian massacres, arson, thunderstorms, and other threats. Can she regain her place with the family she loves?

Audience: Originally intended for young adults, this is most suitable for ages 10-12, although Malvern has dedicated adult fans as well.

My Impressions: I used to say that much of what I know about Judaism came from All of a Kind Family and Gladys Malvern, as she was well known for several historical novels based on biblical characters.  My favorite was Behold Your Queen, about Esther, which I am happy to say is currently in print, as is The Foreigner, which is about Ruth and Naomi – both with beautiful new covers.  Her other historical fiction is also charming, with several set in New Amsterdam, and others about Lafayette’s daughter, historic New England, and one called Rogues and Vagabonds about the first acting troupe to perform in the American colonies.

Part of charm here is the vivid depiction of daily life among the Dutch and glimpses of famous, including Peter Stuyvesant.   Malvern manages to include many Dutch customs without being heavy handed, with the result that this is more of a historical than a romance.  Gerrit and his brothers come to love Jonica as a sister but the reader knows she will wind up with the thoughtful young man, and it happens hurriedly at the end.

About the Author: Gladys Malvern (1897-1962) was a beloved author of historical fiction, as well as a 20th century contemporary series I loved about Gloria Whitcomb, an aspiring ballerina, and several biographies.  Her mother worked in the theater, and Gladys and her younger sister Corinne performed together in Vaudeville for many years, traveling throughout the country.  The descriptions of Gloria’s travels with the ballet troupe in Prima Ballerina, by train from one chilly theater to another, are especially vivid and doubtless reflect Malvern’s own experience.  While it seems like a hard life, she does convey a sense of camaraderie among the dancers and staff.

In her 20s, Malvern settled in Los Angeles with her mother and Corinne, where Gladys worked in advertising and Corinne studied art.   Eventually (perhaps their mother died?) the sisters moved to New York and shared an apartment.   Gladys worked hard at her writing until her first book was published.   Her love of the theater shines through many of her books, and she and her sister remained enthusiasts their whole lives.  Some of her papers are part of the New York Public Library collection.

About the Illustrator: Younger sister Corinne grew up in the theater with her mother and sister but a railroad accident forced her into “retirement” at the tender age of ten.  She turned to her second love, art, and studied at boarding school and then the Art Students’ League in New York.  She worked in fashion advertising and pursued art at night until she was able to support herself.  Some of her most enduring art is seen in the illustrations of her sister’s books.

Source: This is one of the few Gladys Malverns I never read/found as a child, and it has been out of print for many years.  I was lucky to get this copy from the Enoch Pratt Library in Baltimore via Interlibrary Loan.   Some Gladys Malverns are back in print thanks to Susan Houston and Beebliome and I urge you to try one, but Jonica's Island is very elusive and exorbitantly priced when it turns up.

I had the exact same reading experience you describe with All-of-a-Kind Family and Malvern! I'm so glad you chose to review this one. Several years ago I decided I wanted to preserve all of Malvern's books as best I could, and I went through inter-library loan and scanned in copies of almost all 40+ books she's written, and read several that were new to me, including "Jonica's Island" and "Dear Wife." When a friend and I decided to re-print a dozen of Malvern's books, I really wanted to reprint Jonica, but it was one of a half-dozen whose copyrights had been signed over to the the Literary Guild by Malvern at her death (she had no heirs or descendants). But I did scan it in! If you'd like a pdf of it, let me know and I'll send you a download link.

Hi all....I am desperately trying to find a copy of Jonica's Island, the first book I ever fell in love with. I'm aware of collectible and pricey editions, but hoping someone might have info on other resources. Thanks,

I've actually managed to snag a cheap copy of this (well, relatively, but at least it didn't go into three figures)off eBay. Reading copy only, as it is extremely shabby and in need of repair, but at least it is complete. I'm going to have to get busy with my book repair tape. If I'm lucky, someone will offer a facsimile dust jacket for sale (I've seen one offered for this book before, and it sparked a ferocious bidding war) so it will at least look decent on the shelf. I have all twelve of those paperback copies, as well as a number of hardcovers I've managed to find over the years. I've also got a few Kindle editions as well. I was delighted to see those paperbacks published - when I'd looked for books by Gladys Malvern a couple of years before that, there was almost nothing available, with even second hand hardcovers being scarce.

Anyways, it was interesting to find out why Jonica's Island was not republished in paperback when the others were, as it seems to be the one in the highest demand. I'm hoping that maybe one day the Literary Guild will decide to republished if they realize there is demand for the books. I've seen that happen before. Rosalie K. Fry's book The Secret of Roan Inish (aka Child of the Western Isles) was highly sought after for years, with even tatty ex-library copies going for in the mid three figure range, with it not being unheard of for slightly better copies to go for the low four figure range. Anyways, it was republished a year or so back due to demand, so I'm not giving up hope of maybe one day the same happening to some of Gladys Malvern's books as well.

I loved Gladys Malvern's books when I was a kid, and eagerly devoured all that my school library had. Historical books were my favourites, and I also loved books such as Mara, Daughter of the Nile by Eloise Jarvis McGraw, Song of the Voyageur by Beverly Butler and most of the books by Molly Costain Haycraft. There were also some excellent British writers such as Rosemary Sutcliff, Geoffrey Trease, Barbara Willard and Cynthia Harnett whose works I also devoured. It has taken some years and more money than I care to count, but I've actually put together a pretty decent collection of these.

It was interesting to read your review of Jonica's Island, and thank you for it.

I have spoken with the Literary Guild, and asked them to consider reprinting Jonica as well; my contact there said they would consider it! But I can imagine that it might not be perceived as politically correct; her depiction of slaves is rather offensive.

I'm glad you liked the paperback reprints! It was a labor of love.

I don't know how many times I read "Jonica's Island" as a child -- dozens, probably. I am in the middle of telling someone about the book just now, and found your post when I was looking for more information about it. I still remember images from the story vividly -- Jonica's long braids, Willem's yellow jacket, the industriousness of Dutch housewives and their never-idle hands. It's amusing to me to find that I don't really remember the Indians or the smallpox, the exciting things, but instead the tiny, quiet things like carefully putting away the precious sewing needle that mustn't be lost because they were so hard to come by.

I'm flabbergasted to see how much used-booksellers are asking for copies of the book these days -- though I have no intention of selling mine, that's for sure.

(Like you, I also learned about Judaism from the All-of-a-kind Family books! -- I read those I-don't-know-how-many times, as well. "The Lost Queen of Egypt" was another of my favorites.)