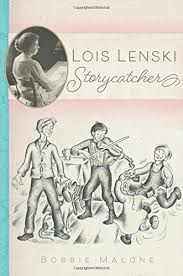 Description: Many 20th century children – including, surprisingly, Oprah – grew up with Lois Lenski (1893-1974) as author and illustrator, and as a writer she expanded the experience of American children by writing regional fiction which depicted the ordinary lives of children from diverse backgrounds throughout the country. In this goal, she was supported by her editors and also by children who read her books and wrote to her, inviting her to come visit their communities so they could share their stories. Lenski won the renowned Newbery Medal in 1946 for Strawberry Girl and probably should have won it for Indian Captive in 1942 (both Indian Captive and Little Town on the Prairie were runners up to The Matchlock Gun (seriously)).
Lenski was a minister’s daughter from Ohio, who pleased her parents by studying education at Ohio State but took as many art classes as possible, then moved to New York after graduation in 1915 for additional art training, against her father’s wishes. She juggled classes with freelance work for several years, meeting her eventual husband when he taught an evening class she enrolled in with several friends. However, her first really successful literary project took place during a year in London when she was invited to illustrate a book called The Green-Faced Toad. Her career took off after that and never stopped, always characterized by hard work and dedication until poor health slowed her down. Malone implies that the marriage was not successful but it continued until the death of Lenski's husband 14 years before her own. 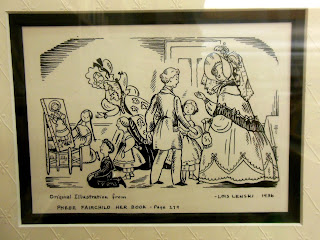 As Lisa von Drasek (wife of my former Penguin colleague Paul) observes in a review for the Children's Literature Association Quarterly: Malone captures the times and places of Lenski's life, describing the fashions of the Roaring Twenties, the effects of the Great Depression on her marriage, and how the social movements of the 1950s and 1960s informed her series of regional books. Lenski's story is also one of American feminism, a strong current running through the decades of her life that includes her struggles as the financial support of her family. Malone judiciously quotes from Lenski's letters, journals, and memoirs as well as the words of her contemporary admirers and reviewers….

Audience: Fans of children’s literature, including Betsy-Tacy; those interested in illustrators and, of course, fans of Lois Lenski herself.

My Impressions: I enjoyed this carefully researched and somewhat intense biography about Lenski, and learned a lot about her dedication to her craft and commitment to children and diversity. She was way ahead of her time as this lack of diversity is still a problem in publishing although, I believe, is a situation perpetuated not only by publishers but by teachers, librarians, and parents. However, as a child I was oblivious to diversity (or lack thereof) in fiction, and I found Lois Lenski when I brought home Betsy-Tacy and Tib from the Boys and Girls Branch of the Newton Free Library. Later, my mother gave me Judy’s Journey one Christmas, which I think was the memorable book in which the heroine’s dresses are made out of used flour sacks. I read several of Lenski’s other books but never became more than a casual fan of her writing although love her illustrations.

Although Bobbie Malone is very passionate about her subject, she is a historian and does not seem very knowledgeable about children’s literature outside of Lenski (for example, referring to Pulitzer prizewinning Laura E. Richards as ‘Linda” – both Lenski and Maud Hart Lovelace almost certainly read Richards’ novels, Captain January and others, as well as her verse). I enjoyed reading about Malone and her country music historian husband’s explorations to various libraries throughout the US with Lenski papers and/or collected materials. Although she met with numerous of Lenski’s friends and families, Malone’s failure to devote significant space to Lenski’s illustrations of the first four Betsy-Tacy books is a big disappointment. Not only could it have enriched the book by adding a lively element to a fairly earnest work but it would have increased her potential sales as we Betsy-Tacy fans are good book buyers. 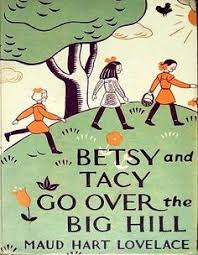 When Maud Hart Lovelace’s editor, Elizabeth Riley, attended the Betsy-Tacy Convention in 1997, we peppered her with questions. Meeting Miss Riley was a highlight of the convention, and I wish I had come with a long list of questions or tried to meet her later in New York before she died. Riley had created Thomas Y. Crowell’s children’s department which came to include not just Betsy-Tacy, but also the Beany Malone books, historical fiction by Elizabeth Hubbard Lansing, Ann Petry (author of Tituba of Salem Village, which I read in grade school), The Endless Steppe by Esther Hautzig (who worked in publicity at Crowell and later volunteered at the NYPL on West 53rd – I think I spoke to her there once without realizing), and many others.

I seem to recall that we asked more questions about Vera Neville, the other Betsy-Tacy illustrator, about whom less was known, but I remember Miss Riley telling us how Lois insisted on traveling to Mankato to see the places Maud so lovingly described and, for example, how she determined she was to reproduce the exact stove Maud remembered. Elizabeth said the two women were very close in age and had a lot in common, that Lois had a very strong work ethic, and was very busy, so not always available as an illustrator.

Source: After reading a review of this book, I requested that the Newton Public Library purchase it, which the Reference Supervisor did, also putting it on reserve for me. Recommended.

Sounds very interesting--I loved Strawberry Girl when I was young and read it numerous times, and got a copy for my kids. They were less enthralled that I was, but I always thought it was good prep for The Grapes of Wrath :)

I do enjoy reading about authors and illustrators and the whole book publishing industry--how it's evolved over time.

Hello, I am not sure if this is still active but I am the great great grand niece of Elizabeth Riley. I had never heard of her work with the Betsy-Tacy series before today.

Hello, I am not sure if this blog is still active but I am the great great grand niece of Elizabeth Riley. Elizabeth had a very small family so there are only 5 blood relatives on Elizabeth currently.

Katie, thank you so much for your comment. Your aunt was and is much admired by Betsy-Tacy and Beany Malone fans for her editing acumen and overall brilliance and I was fortunate enough to hear her speak in Minnesota once. Are you a fan of these books yourself? I wonder if you would be willing to talk to some of your great-aunt's admirers?