The 1968 Club is a meme created by Simon from Stuck in a Book, who chose a literary year and has encouraged other bloggers to read up and post on books published that year.  Check out all the reviews here!  When I realized the other book I had chosen, Cousin Kate, had been reviewed by several people, I wanted to pick something not previously included, hence: 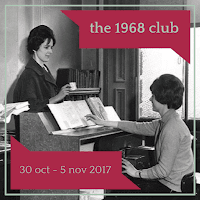 Plot: When Owen’s irascible grandfather, old Mr. Hughes, discovers the legendary golden Harp of Tiertu, he brings unwanted attention to the small Welsh village of Pennygaff. Everyone has a claim to the Harp, including the mysterious Seljuk of Rum, an obscure order of monks which has mostly moved to China, and the local lord of the manor. In fact, the Marquess of Malyn hires two rascals to seize it when old Mr. Hughes, who manages the Pennygaff museum, insists on researching the rightful owners. The thugs snatch both Harp and Owen, who is falsely accused of the theft. With the help of his friend Arabis, a young girl who is a talented herbalist, and his frenemies from the Jones Academy for the Sons of Gentlemen and Respectable Tradesmen, Owen seeks to clear his name and solve the prophecy of the Whispering Mountain, which concludes: “And the men of the glen avoid disaster / And the Harp of Tierto find her master.”

My Impressions: This was a fun read, and would appeal to most fantasy readers. Owen is a quiet, bespectacled boy who is treated like an interloper, lives with an unappreciative relative, and is much braver than he seems at first (sound familiar?). Miserable in Pennygaff, he is too proud to burden his only friends, Arabis and her absent minded father Tom Dando, a poet, with his troubles, so he plans to set forth to seek his fortune, armed with nothing but his greatest treasure, a little book given to him by his father, “Arithmetic, Grammar, Botany & these Pleasing Sciences made Familiar to the Capacities of Youth."  Instead, he gets kidnapped, and that is when his adventures begin. The combination of the Welsh used by the characters (much of which can be guessed but I didn’t notice the glossary until I finished the book – I guess that proves I am not one of those read the last page first people) and the cant used by the two thieves might be off-putting to some but just takes a little getting used to. It is very reminiscent of the slang used in Black Hearts in Battersea, which is good training for Georgette Heyer! 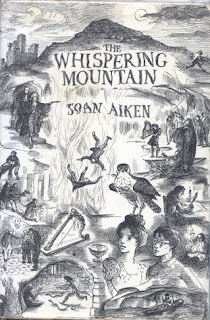 Although I read and reread The Wolves of Willoughby Chase, Black Hearts in Battersea, and Nightbirds on Nantucket repeatedly as a child, I have no recollection of The Whispering Mountain (maybe I didn't like that odd blue cover above - I remember that clearly), which is now considered a prequel to Wolves published in 1962 (her daughter Lizza has created a wonderful website with information Joan was probably too modest or too busy to share (plus, harder to do in a pre-web world), and is also working to keep all the books in print). I also read several collections of short stories and I remember the first book I ever put on reserve at the Newton library was the extremely scary Night Fall (back then you paid for a postcard which was sent when the book arrived).
One of the big literary thrills of my life was meeting Joan Aiken in person when she did an event at Books of Wonder in 1998! I think I respectfully asked about her ruthless habit of killing off characters (I don’t recall to whom I was alluding although she does it somewhat gratuitously in The Whispering Mountain), and she told the audience at that event that she had planned for Dido Twite to drown (at the end of Black Hearts in Battersea) but an impassioned letter from a fan changed her mind and she is thus rescued at the beginning of Nightbirds on Nantucket. 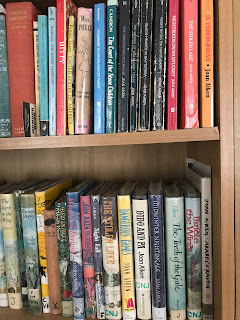 For those who don’t know – and I must admit it went over my head when I first begin reading these books at 8 or so – the Wolves books take place in an alternative 19th century in which the Stuarts had not been deposed by William and Mary. Instead, the Hanoverians are plotting to regain what they consider their rightful thrown. The Prince of Wales who appears in The Whispering Mountain is meant to be the son of James III. I have always intended to read the full series in order, so this is a good start, although I am surprised to find I am missing a few.

I am also a big fan of Joan Aiken's sister, Jane Aiken Hodge, who also wrote some wonderful historical fiction mostly set in the 19th century.  My favorite is Savannah Purchase.  She also wrote a fascinating book about Georgette Heyer.

Source: I own a paperback copy that shows Arabis riding a camel with her falcon, Hawc, perched on her head. Recommended.
Posted by CLM

Thanks so much for contributing to the 1968 Club - I had no idea there were so many books in this series!

I believe I missed this completely as a child, only reading it when I got into the whole series again a year or two ago. Thought the chronology of the series is a bit muddled I do think it's best to read this one in publication order, meaning between Nightbirds on Nantucket and The Cuckoo Tree, instead of as a "prequel." It sets up certain characters and situations that make it fit logically there - insofar as logic applies to this alternate universe.

Anyway, I'm glad this book is getting some attention due to the Club!

Owen has met Arabis before,according to the story.Is that adventure in a book anywhere?