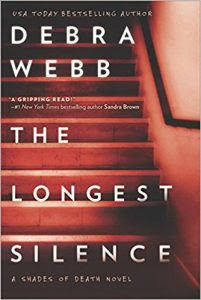 Plot: A killer stole her voice.  Her only friend has committed suicide. Now she’s ready to take it back.

Joanna Guthrie was free. She had been for eighteen years–or so she needed everyone to believe. What really happened during the longest fourteen days of her life, when she and two other women were held captive by the worst kind of serial killer, wasn’t something she has ever been able to talk about. Not after what they had to do to survive.

But when more women go missing in an eerily similar manner, Jo knows her prolonged silence will only seal their fates. She’s finally ready to talk; she just needs someone to listen. Disgraced FBI special agent Tony LeDoux is that someone and he can’t deny he finds Jo compelling–he’s just not sure he believes her story. But with the clock ticking, Jo will do anything to convince him, even if it means unearthing long-buried secrets that will land them squarely in the cross-hairs of the killer…

About the Author: Debra Webb is the USA Today bestselling author of more than 100 novels, including reader favorites the Faces of Evil and the Colby Agency series. She is the recipient of the Romantic Times Career Achievement Award for Romantic Suspense as well as numerous Reviewers Choice Awards.

My Impressions: This is a very dark narrative in which two damaged characters come together to solve a long hidden mystery. Jo has never been the same since she was tortured by a killer during a previously carefree freshman year of college. Years later, she is a journalist for an online newspaper so she can work from home, avoid people, and pick up strangers when she feels like having sex. Tony, forced out of the FBI after obsessing about his career at the cost of innocent victims, has relied on alcohol and women to dull the pain; he no longer has a badge to rely on but is determined to find his missing niece, captured by the same killer as Jo. When Jo comes to him for help, they sleep together (well, why not, when there's a killer or three on the loose) but their relationship reveals little sense of connection other than a collaboration to find a killer. Those looking for romance may be disappointed but readers interested in a suspenseful serial killer novel will enjoy an unusual story.

Technically, this is the fifth in the series but I felt it worked as a standalone, although I assume Tony's FBI disgrace is covered in The Blackest Crimson.   The plot, while not impossible considering the crazy things we encounter on a daily basis via the media, is not very convincingly handled, and I could have done without the gratuitous violence.

Source: I was provided an ebook by the publisher and TLC Book Tours for review purposes. I seem to be the final stop on the tour but you can visit earlier stops below: