Description: Lynette and Jeremy Darwin and their friends next door, Sandra and pert nine-year-old Madelaine Fayne, are pleased when a new family with three children roughly their ages moves into the nearby Corner House. Nigel, Vicky, and Bulldog Halford are a congenial addition to their group, and the seven happily explore Fenchester together during their Easter holidays. Just as they are bored and wondering what to do next, Mrs. Bell, the vicar’s wife suggests they start a theatrical company and put on a play for charity. The children clean up an old hall and found the Blue Door Theatre Company, each taking various roles and responsibilities - not just acting or dancing but designing the sets, writing plays, and producing – having fun but also demonstrating talent that surprises their families and impresses the community.
Quotes: Part of the charm of this new edition is the quotes on the cover from two stars of the British theatre who read it as children:
“I wanted to act before I read this book, and afterwards there was no stopping me.”
Maggie Smith (aka Violet Crawley, Dowager Countess of Grantham, among many roles)
“An enchanting book. A must for any child who wants to become an actor.”
Eileen Atkins (click here for her storied career)

My Impression: We’ve all been starved of live theatre for a year so Reading the Theatre Month at Lory’s Entering the Enchanted Castle seemed a good opportunity to read some fiction that allows us to enjoy it vicariously. This story about seven friends, each interested in a different aspect of performing arts, who come across an old chapel and transform it into a theatre, was lively and amusing. It takes a while to “get” the individual personalities of each child but there are definite types – the would-be actress who has a hard time taking a lesser role, the younger sister who does exactly what she pleases, the boy whose acting makes the audience laugh despite his efforts to be serious, the serious dancer – all recognizable from other books we have read. I probably would have appreciated this much more at age 10 but I was still impressed by the author’s creativity and descriptions. For example, I enjoyed the way Maddie, the youngest, terrifies an antique dealer into lending items from his shop to be props for the productions and how Bulldog agonizes about the new theatre’s curtain mechanism all through the book until he can make it swish.
Brown may not have the charm of Noel Streatfield, at least not in my opinion, but the story is enlivened by some great characters. One is kind Mrs. Bell, the vicar’s wife, who takes a kind interest in the seven, having no children of her own, and suggests they form a theatre company in the first place. The Bishop of Fenchester is also delightful, supporting the children in their enterprise, which would by itself would be unusually generous. However, he goes much further – he takes the group to Stratford-on-Avon to enrich them with some Shakespeare and when their worried parents try to make the children focus on more practical careers, he supports their desire to train for the stage and persuades their parents to let them try. 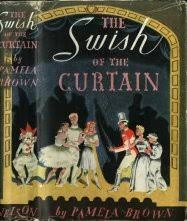 About the Author: I heard about Pamela Brown years ago from my GirlsOwn discussion group, how she had written this book when she was 16 and gone to London to train as an actress herself. I found the books I was able to locate, Golden Pavements and The Windmill Family, disappointing so I mentally forgot about her but when I saw this was available in my library network I thought it would be the perfect thing for a theatre theme.  The town of Fenchester is based on Colchester, where Pamela Brown lived before WWII. She used her earnings from the book to pay for training at the Royal Academy of Dramatic Art, and became an actor and television producer, as well as a writer.
The Merry Widow Waltz: A radiogram is playing my favorite waltz at the Garden Fête where the Blue Door Theatre Company performs various scenes from Shakespeare.
Source: Library
Posted by CLM

This does sound very Streatfield-like! I'll have to see if I can find a copy. Thanks for a charming review.

This sounds really good. Thanks!

Constance, I did find a mystery novel with a theatrical theme on my TBR shelves, so I plan to read it soon and review it for Reading the Theatre.

While I did not have a desire to act (my thing was music) I have watched one of my granddaughters become an actress. Just reading your review brought many memories of going to see her in plays and musicals.

I've loved this book since I was a child, and there's a set of sequels as well which have all been re-issued quite recently.

Oh this is one of the books I have been meaning to read for years. Yes, the premise sounds a little like Party Shoes by Noel Streatfeld which is a great book with a wartime setting. Very much enjoyed your review.

Wow, a book that cemented Maggie Smith's desire for acting. Impressive. Reading the Theatre Month sounds like a fun challenge, look forward to your selections. And for some reason, this reminded me of Sound of Music, that puppet show especially. :)
~ Lex (lexlingua.co)

When I read your description of this one I immediately thought of Streatfeld, too. :)

Constance, it was late when I left my comment last night. Today realized I had not said anything about your lovely review. The book sounds very interesting. And Nicola's comment makes me want to try Party Shoes as I love a wartime setting.

The book does resemble Party Shoes, which I have to admit is not one of my favorite Streatfeild's although I like the concept - protagonist receives lovely dress from America during the war so needs an opportunity to wear it. I suppose I like Streatfeild's books about real performers more than the casual "let's put on a show" variety, although there is a charm to the poor vicar's family theme too.