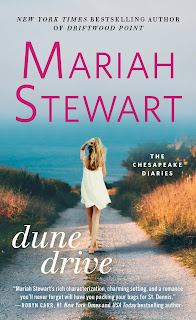 Plot: When Chrissie Jenkins finally gains the courage necessary to escape from her abusive boyfriend, she heads to Cannonball Island, just off St. Dennis, Maryland, a quirky coastal town which has appeared in previous books by Stewart. She is welcomed by Ruby Carter, her great-grandmother, a feisty octogenarian with enough second sight to unnerve her affectionate relatives. Ruby runs the Island’s General Store where Chrissie helps out while she is recovering from years of misery. While visiting the local Inn, Chrissie runs into Jared Chandler, a marine salvage diver she met at a family wedding. Neither is looking for romance but a warm friendship develops between them. When their relationship turns romantic, Chrissie has to decide if she can bear to reveal her past to those who might judge her and if she wants to risk heartbreak again.

My Impressions: Stewart writes about multilayered characters, with weaknesses as well as strengths, dealing with challenges and life lessons. Given the seriousness of domestic abuse, this is obviously not as carefree a story as some of her others, although it has many light-hearted moments. She does a good job of describing how someone like Chrissie could get swept off her feet by a manipulative and abusive man, and doesn’t insult her readers by implying Chrissie can immediately transition into a new relationship (although this is a romance, so the reader is rooting for Chrissie and Jared). In addition, Chrissie’s search for a job that she would enjoy and feel comfortable in leads to a delectable depiction of the operation of a small bistro (previously featured in At the River’s Edge). Chrissie’s journey of rediscovery also involves many of the characters featured in the previous eleven titles in the series as well as some from another.  I have missed a few in the series but they stand alone fairly well: you definitely know what you're getting with each book.

Questions for the Author: Chrissie’s parents divorced when she was one, and her father took her brother Luke and was never heard from again. Yet Chrissie “remembers” something Luke once told her and misses him acutely. But there’s no way a one year old could remember something a sibling told her, and I doubt she’d remember her sibling either. It might have been much better to create conflict between her parents that began or was precipitated when she was an older child. Also, it seems to me that an abused woman on the run would not allow anyone to take her picture.

Source: Thank you to the publisher for providing me a copy of this book to review.
Posted by CLM

Loved the book, but like you, I also noticed that part in the first chapter. How can a one year old remember what her brother told her?