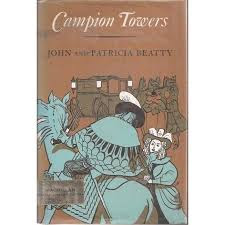 Plot: When 15-year-old Penitence Hervey travels from Salem in the Massachusetts Bay Colony to England, she arrives in 1651 as the country is still embroiled in Civil War. As a Puritan, Penitence is wary of her new family, the Killingtrees of Campion Towers who are unabashed Cavaliers, and she agrees to spy on them for Cromwell. Her relatives are unfriendly: her grandmother is dying and mistakes her for her deceased mother, her grandfather is furious to see her, her aunt is critical, her cousin Douglas is a spiteful girl her own age, and they lock her into her room at night. Pen is delightfully flawed – quick to anger and jump to conclusions and less respectful than most girls her age (although, surprisingly, this helps to win over her grandfather). She is also appealingly intrepid and as she explores her home and the Worcester area she learns some of the family secrets, including that her handsome cousin Julian, outlawed by Parliament, is a boon companion of Charles Stuart, the rightful king of England. Soon Pen finds herself caught by the claims of old and new loyalties, inspiring the kind of courage that delights readers and which makes a compelling story with unexpected twists.
Audience: This is a young adult historical fiction written by a noted husband/wife team. John Beatty was a professor at the University of California specializing in 17th and 18th English history and his wife Patricia also authored several books of her own.  The California Library Association's John and Patricia Beatty Award annually honors the author of a distinguished book for children or young adults that best promotes an awareness of California and its people.

My Impressions: This is a charming book, which seemed to be written just for me with settings in Massachusetts (US) and the Worcester (UK) countryside, which I recently visited (an English friend recently asked in puzzlement why I had wanted to visit Worcester and was quite surprised when I brought up its importance in the English Civil War). It is more common for fictional heroes or heroines to start in the Old World and seek their fortunes in the new one than to travel back, as Pen does. This makes Pen’s view of her family and the state of English politics quite intriguing and the authors do a good job of showing how Pen’s upbringing and the unscrupulous people who try to use her preconceptions about her mother’s family nearly result in disaster for the good guys. Well, in fact, Oliver Cromwell does win the Battle of Worcester (boo!) but Charles II is not captured by the Parliamentary forces. As Irish writer Oliver Goldsmith said:


For he who fights and runs away
May live to fight another day;
But he who is in battle slain
Can never rise and fight again.

Pen’s new home is named for my family’s favorite saint, Edmund Campion (1540-81). Campion was a Jesuit who braved Elizabeth II’s priest hunters to bring the sacraments to Catholics in England. Some manor houses, such as the one in this story, then known as The Old Abbey, built secret passages to hide visiting priests. Neighbors trusted to keep the secret would be invited to Mass. Over time, the Killingtrees’ secret resulted in a new name for their home. Campion was not so lucky – in 1581, he was captured, tortured, tried, and eventually hanged, drawn, and quartered on December 1, which is now his Feast Day.
Charles II plays a larger part in this story than Campion: in fact, he is always depicted as larger than life in fiction or nonfiction. Pen has several memorable encounters with Charles II, first when she finds him hiding in the secret passage used by St. Edmund. She thinks he is a priest come to bring her grandmother the last rites and is shocked when he kisses her.


“You dare to do this!” I cried out. “What would the people who believe in what you stand for think if they knew?”
I had caught him there. He looked puzzled. “I do not believe I understand you, mistress . . . .”
“May I go now?” I asked angrily.
“Perhaps you had better,” he agreed. “I prefer maids who do not speak in parables of what is to come and who would rather kiss than ask questions.”

English Civil War: For those interested in learning more about the English Civil War or just interested in good historical fiction, Campion Towers is back in print from Beebliome Books and I also recommend Stella Riley’s historical novels for adults; start with A Splendid Defiance.
Source: I found my hardcover copy of Campion Towers years ago at the Travelers Restaurant, a quirky bookstore/restaurant on the Massachusetts/Connecticut line but I didn’t get around to reading it this summer when my friend Michele Blake mentioned it was one of her favorites! Hmmm, I thought, and went upstairs to search my shelves until I found it . . .
Posted by CLM

Hi Constance: We met at the Betsy-Tacy convention this summer. Just wanted to comment that I read this book in junior high and loved it! I bought it a few years ago and enjoyed it anew!

Such a great book! Not sure how I missed it as a child but, unlike some, I enjoyed it just as much as an adult.

Great to hear from you, Donna. I hope we get to discuss books in person again some day!