When the Lights Go Out by Mary Kubica (Book Review) 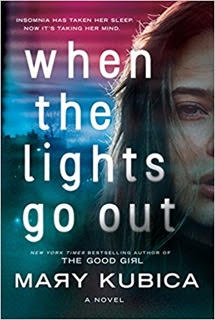 Plot: Two parallel stories: Eden, a carefree newlywed, becomes so obsessed with having a child that it threatens to destroy her marriage, and Jessie, a young woman who has just buried her dearly beloved mother and has not been able to sleep since that terrible day. As if being without family or friends isn’t bad enough, when Jessie submits a college application, she is told her social security number belongs to someone else and is plunged into a mystery about her own identity. Is there anyone she can turn to? Is everything her mother told her a lie?

My Impressions: It is hard to articulate my thoughts about this emotional thriller without revealing the controversial twist at the end. Jessie is a sympathetic character, devoted to her mother and suffering from such intense insomnia that the reader can feel every exhausted grasp for coherent thought. In addition to the mystery about her identity, Jessie is unnerved by the carriage house she has just moved into, from which she hears strange voices and sees lights in the attic next door at midnight. I was reminded of Elizabeth is Missing in which a character with memory issues is worried about her missing friend.

This is a very readable story that will keep you up late; however, I am not really a fan of unreliable narrator stories and in When the Lights Go Out there are two, although the truth is revealed in time. My caveats: Eden’s self-destructive obsession got tiresome and the plot twist at the end was annoying (not least because I liked Liam). In contrast, I recall reading Kubica’s debut novel, The Good Girl, which seemed more creative in that parts of it were written from the bad guy’s perspective.