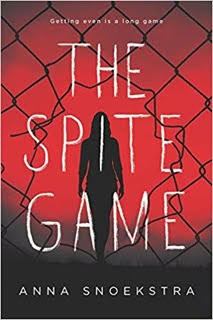 Plot: Everyone does bad things when no one is watching

Mercilessly bullied in high school, Ava knows she needs to put the past behind her and move on, but she can’t—not until she’s exacted precise, catastrophic revenge on the people who hurt her the most.

First, she watches Saanvi. Flawlessly chic and working hard at a top architectural firm, Saanvi has it all together on the surface. But everyone does bad things when they think no one is watching and Ava only wants what’s fair—to destroy Saanvi’s life the way her own was destroyed.

Finally, Ava watches Mel. Mel was always the ringleader and if anyone has to pay, it’s her. But one tiny slipup and Ava realizes the truth: Mel knows she’s being watched, and she’s ready to play Ava’s games to the bitter end.

Audience: Fans of very dark suspense, books like The Chalk Man and I Know You Know

My Impressions: Anyone who has ever been bullied or offended has contemplated revenge. Usually, the bright light of day sends such thoughts back to one’s most ignominious depths. Ava, however, is obsessed and can’t move on with her life until she has punished all of those who made her last year of high school so miserable. This poses a problem for the reader: while she was indeed unfairly tormented, her revenge plots are excessive and are hurting her more or as much as her victims, which makes it very hard to root for Ava. Why can’t Ava recognize her machinations are ruining her life? Will she survive her own plots?

Two well known revenge books are The Count of Monte Cristo and Mockingjay, third in the Hunger Games series. I was trying to think of revenge stories I enjoy and wondering if all of them threaten to destroy the life of the revenge-seeker. One frequent theme is heroine seeking to punish a man by making him fall in love with her, whereupon she will dump him. Invariably, she falls in love with him and he can’t forgive her – or at least not right away. There are also books where the hero is trying to make the heroine fall in love with him for revenge. My favorite revenge story doesn't fall into either category: The Dinosaur Club by William Heffernan, in which a man who has been downsized gathers together his fired ex-colleagues, and calling themselves “The Dinosaur Club” they plot to ruin their former employer. It’s a page-turner I recommend.

Off the Blog: In addition to finishing The Spite Game, I used this day off from work to plant tulips and catch up on The Resident, which features Matt Czuchry from Gilmore Girls.