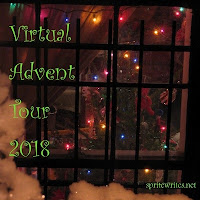 “Here,” said Betsy, “here we buy.”She looked at Winona, bright-eyed, and Winona looked from her to the resplendent table.“Nothing,” Tacy tried to explain, “is so much like Christmas as a Christmas-tree ornament.” “You get a lot for ten cents,” said Tib.

They gave themselves then with abandon to the sweet delight of choosing.  It was almost pain to choose.  Each fragile bauble was gayer, more enchanting than the last.  And now they were not only choosing, they were buying.  What each one chose she would take home; she would see it on the Christmas tree; she would see it year after year, if she were lucky and it did not break.

They walked around and around the table, touching softly with mitten hands.Betsy at last chose a large red ball.  Tacy chose an angel.  Tib chose a rosy Santa Claus. Winona chose a silver trumpet.They yielded their dimes . . . [t]hey walked to Ray’s Shoe Store, smiling, holding Christmas in their hands.

Each year a number of human “elves” make random assignments so that we can send ornaments anonymously to each other in the guise of the series characters or using incidents in the books as inspiration. Each ornament I have received is my favorite but two I especially love are the very first one I received, a dressmaker’s dummy from Miss Mix, Betsy Ray’s seamstress, and a more recent one, a Big Ben ornament that evokes Betsy’s sojourn in London just before WWI.
My tree is not yet trimmed but here is this year’s ornament – sent by the piano from Betsy’s home. How did my kind sender know how the image of Betsy and her friends rolling up the rug so they could dance while Mrs. Ray pounded out a two-step is one I see so clearly in my mind’s eye and cherish? (Betsy-Tacy fans often yearn for a television show to bring attention to the tomes we love but we also fear a cartoonish depiction that would make us cringe; our imaginations are preferable.)
My younger nieces, also Betsy-Tacy readers, participated in the ornament exchange this year, and you can see Katherine (11) received a lovely vintage bicycle ornament for Winona (above).  Tess (7) received an ornament from Tib.   You can also check out some of my ornament posts from previous years.
If you have not read Betsy-Tacy (what are you waiting for?), it is Betsy-Tacy Goes Downtown in which the girls make the first ornament expedition but I recommend Heaven to Betsy for first time adult readers.

Thanks to Nan of Letters from a Hill Farm - I read about this Advent tour on her charming blog.
Posted by CLM

What a fun idea! I haven't read the Betsy-Tacy books since elementary school, but your post is the second time they were mentioned today (and, then, too, in relation specifically to the Christmas scenes), so I feel like it might be time to revisit them. I love your piano ornament and your niece's bicycle! Thanks for participating in the Virtual Advent Tour with us this year!

It was a tradition in my family growing up for each of us children to receive an ornament for Christmas. I have all of these now on my own tree and they bear so many memories. I loved the ornament scene in Betsy-Tacy and I also love the idea of celebrating the books with an ornament exchange!

Lovely tradition! And, thank you for sharing these books and I am wondering how on earth I did not know about them!

It's so interesting--As I read your post all the way through and examined the photos, I felt myself unwinding, relaxing a bit. Maybe all is not lost because I haven't trimmed the little Charlie Brown red spruce tree in my living room! A wonderfully written entry and a series of books I've heard about but have never tried. It certainly isn't too late.

What a nice tradition! And I've never heard of this series before, I'll have to look into it!