A Coronet for Cathie by Gwendoline Courtney 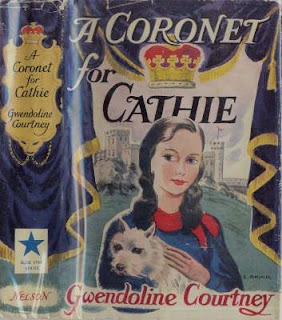 Plot:  Following a long illness, 15-year-old Cathie learns she is the heir to the duchy of Montford.  Worried about Cathie’s health, her aunt had sought out the girl’s estranged grandfather, the Duke of Montford, to seek his help.  At the lavish estate in Exmoor, the ailing Duke lives conveniently long enough to meet Cathie and revise his will; when she wakes up, she is the Duchess.  While Aunt Bet returns to school teaching, Cathie is welcomed by her uncle-in-law/new guardian, crusty but kindhearted Colonel Rushton and his three outgoing children, who bring out the lively side of Cathie’s personality.  As Cathie regains her health, her demure sparkle and sense of fairness endear her to all.   There are adventures with a spiteful governess, interaction with loyal retainers and sycophantic neighbors, a holiday in Devon, and, finally, a day school where Cathie is able to quietly overcome the snobbishness that has become pervasive merely by being herself.   Nearing 17 at the end of the book, Cathie has matured, is healthy enough to ride horseback and win at a coconut shy, and is taking responsibility for her tenants’ wellbeing and vowing to be trained in estate management.

Audience: Fans of classic English fiction, especially those who enjoy a rags to riches theme.

My Impressions:  You know how much I like orphan stories, and this one is delightful, full of well-depicted characters and a winsome heroine.  Cathie’s bemused acceptance of her inheritance is a little like Queen Victoria’s, “I will be good.”   If there weren’t modern accoutrements such as motor cars and telephones, it would be easy to imagine this story taking place in the 19th century instead of (presumably) the 1950s.  This is partly because Cathie’s illness is so over the top, requiring footmen to carry her about and a loyal retainer who shoos everyone away whenever Cathie’s eyes droop.  I do, however, like her gruff guardian who is relieved his son hasn’t inherited the title, wants the best for Cathie, and learns from his mistakes.   It is hard luck on devoted Aunt Bet, who has to leave the niece she has brought up since the age of 5, continuing her career as an educator when her niece has become one of the richest landowners in the country.  A pity the Duke didn’t provide her with a modest bequest!

Cathie makes friends easily and at school seeks out the smartest girl in the class, although Ruth is looked down on by the affluent students because she is poor:

Helena flushed angrily . . . “But you’re new here, and perhaps you don’t understand.  St. Agatha’s used to be a most select school until Miss Morris came with all her new-fangled ideas.  Well, naturally we can’t argue with her, but we can show what we think of things by refusing to accept girls like Ruth Neale---”

“What’s the matter with her?” asked Cathie in the same meek tone, though there was a warning gleam in her grey eyes if only Helena had noticed it.  She was so angry that her usual shyness was forgotten; besides, it was amazing how much courage she derived from the knowledge that if Helene knew her real identity she would behave very differently.  Somehow, knowing that, none of this really mattered; it was just like acting a part in a play.

Helena glared at her. “Her father’s a blacksmith!”

“I don’t see what difference that makes to Ruth,” Cathie objected gently.  “I like her, so that’s all that matters.”

Heroine alert!   The best ones always have grey eyes and are kind to their vassals.  And no one likes a snobbish head girl, Helena!  Just as Sara Crewe effortlessly becomes a leader at Miss Minchin’s, Cathie, masquerading under an alias but using her resources (an empty barn on the estate that can become a clubhouse), comes out of her shell to unify the girls who dislike the cliquish behavior of the school leaders (this is partly noblesse oblige and partly just good training by unappreciated Aunt Bet).  A real princess thinks of others and treats everyone fairly, whether down on her luck like Sara or newly ascended to the nobility like Cathie.   Cathie is solicitous of those around her and, while we don’t see as much of her inner thought processes as of Sara’s, they share the ability to inspire those around them. 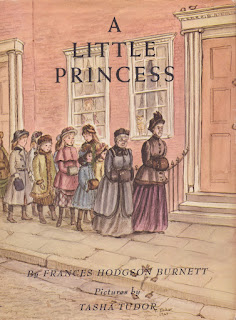 The Montford holdings are enormous (a house in London, another in Leicestershire (a hunting lodge, perhaps) and a big place in Scotland), not to mention the land surrounding the castle – when Ruth comes to thank the Duchess for assisting her family, we learn she bicycled 15 miles from her family’s modest estate cottage!  It is fortunate that Cathie has been brought up modestly and is dismayed by those who fawn over her status, although by the end of the book she is “beginning to feel that it did not matter much where she was plain Catherine Sidney or the Duchess of Montfort.  In either case, she felt capable of dealing with the [snobs] of the world.”   Ironically, of course, her grandfather must have been one of those snobs, as he quarreled irrevocably with Cathie’s father for marrying beneath him.

This was a reread inspired by Scott from Furrowed Middlebrow and when I was emailing him about this book, my spellcheck kept changing the title to “A Coroner for Cathie.”  As Scott pointed out, that would be a very different book indeed!

Source: Personal photocopy from kindhearted ET.  I should have bought a copy from Girls Gone By during the brief window when it was back in print but I didn't realize until it was too late.  It is hard to find and copies are expensive.  As far as I can tell, the only book by Gwendoline Courtney that was published in the US is Those Verney Girls, which I also recommend.

Off the Blog: Thanks for the sympathy for my car disaster!  My brother and brother-in-law have been very generous with cars and rides when needed but I am relieved to have found a new-to-me Toyota and plan to take possession of it this week.
Posted by CLM

This sounds lovely. Too bad it's unavailable! Any interest from Furrowed Middlebrow?

I think that Girls Gone By would reprint if there is sufficient demand.

This sounds delightful! I am off to check if interlibrary loan can find me a copy.

Sounds like a good one! When I saw the cover I thought "looks like the cover of Half-Penny House" which I recall as being a book of my mother's. However, I can find no record of such a book existing! A puzzlement.

Maybe you mean Half Crown House?