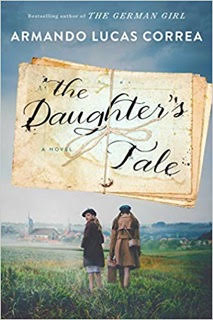 New York City, 2015. Eighty-year-old Elise Duval receives a call from a woman bearing messages from a time and country that she forced herself to forget. A French Catholic who arrived in New York after World War II, Elise is shocked to discover that the letters were from her mother, written in German during the war. Despite Elise’s best efforts to stave off her past, seven decades of secrets begin to unravel.

Based on true events, The Daughter’s Tale includes one of the most harrowing atrocities perpetrated by the Nazis during World War II. Bleak and immersive, it is a family saga of love and survival.

Giveaway: I have one copy to give away – please share your favorite WWII novel in the comments and I will pick a name on May 23 (US and Canada only, please)

My Impressions: Historical fiction set during WWII is one of my favorite genres, and this one, told in dual timeframes, starts in 21st century New York before moving to a familiar situation in 1930s Berlin - where a family starts to witness the atrocity of Hitler’s Germany but is unwilling to believe their own lives will be affected. By the time Amanda and her doctor husband, Julius, recognize what is happening to Jews like them it is too late to escape together. However, Amanda is determined to save her little girls, no matter the cost to herself or anyone else. The story focuses on her desperate struggles in Germany and in France, and the heartbreaking choices a mother can be forced to make in order to keep her children alive. Fans of All the Light We Cannot See and The Women in the Castle will probably enjoy this novel.

"Those who cannot remember the past are condemned to repeat it.” While I enjoyed this book, I couldn’t help thinking of the stories we hear nightly about desperate families being torn apart by the current administration and perhaps that is why I was not as moved by imaginary Amanda’s struggles. I did like the character of Father Marcel, a priest whose compassion is instrumental in the Sternbergs’ survival, but I felt that the little French village (albeit based on a real one) was such a fictional cliché with the inquisitive neighbors, the woman carrying on with German soldiers, the brave priest and a few men trying to contribute to the Resistance, the bullying school children, the hidden radio, the soldiers seeking reprisals. You really need something new if you are going to set a novel in this period, and I didn’t find it here (a variation of the reprisal incident, although based here on a real life atrocity, is another fixture of books set in WWII France). A story told from the perspective of the resentful daughter of the household that takes in the refuges might be interesting – at one point, I thought that was where the story was going and I sympathized with Danielle, but author Correa went in a different direction.

Quibble: Would hot baths have been readily accessible in this remote French town? I know people in England who didn’t have toilets in their home until the 50s. Would a refugee like Amanda make herself quite so much at home with a bath every day? Not that I begrudge the poor woman a hot bath so long as she heats the water herself and carries it to the appropriate place . . .

My favorite WWII books include While Still We Live by Helen MacInnes, Code Name Verity by Elizabeth Wein, A Town Like Alice by Nevil Shute, This Was Tomorrow by Elswyth Thane (don’t read this series out of order), and Citizens of London by Lynne Olson (nonfiction). Follow me on Goodreads to see my whole WWII list.
Source: I was provided a copy of this book by the publisher and TLC Book Tours for review purposes. You can visit other stops on the tour and read the reviews by clicking below:


May 8th: Tar Heel Reader and @tarheelreader
May 9th: Kendra Loves Books
May 10th: Books and Cats and Coffee and @bookncatsncoffee
May 12th: Books and Bindings
May 13th: She Reads With Cats and @shereadswithcats
May 13th: Into the Hall of Books
May 14th: Audio Killed the Bookmark and @beritaudiokilledthebookmark
May 16th: Tina Says
May 17th: Amy’s Book-et List
May 22nd: Savvy Verse and Wit
May 27th: Thoughts on This ‘n That
Off the Blog: I have now caught up with Game of Thrones and am completely enthralled by the final season. The penultimate episode aired last night. Which Game of Thrones character are you?  I am Arya Stark:


You are not to be messed with, that's for sure. You are a disciplined and skilled fighter, and your enemies would be wise not to cross you.

I do share Arya's predilection for lists and revenge!
Posted by CLM

I'm really glad that you enjoyed this one! Thank you for being on this tour! Sara @ TLC Book Tours