Devices and Desires: Bess of Hardwick and the Building of Elizabethan England by Kate Hubbard

The review below is a cameo appearance (her second) by my mother, Stephanie Martin, as I knew she would enjoy the book. 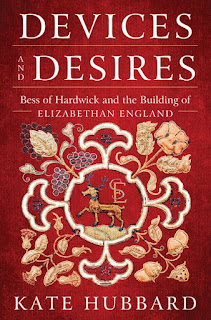 When books are written about 16th-century women, the subject is usually royalty. Besides their glamor, they are the ones for whom we have the most information. Elizabeth Hardwick is a remarkable exception. Not only did she have a long, eventful and well-documented life, she also was responsible for several splendid buildings.

Bess was born about 1521, lived to be 87, and outlived four husbands, the last marriage making her the Countess of Shrewsbury. She inherited property, married money, but increased and managed her holdings with great skill and became a very wealthy woman in her own right. She was friendly with all the major players of her time, including Queen Elizabeth I, who chose the Shrewsburys to be the jailors of Mary Queen of Scots when she sought refuge in England.

Devices and Desires is not the first biography of Bess, but it has particular appeal because it highlights Bess’s achievements as a builder. An amazing number of records have survived from Chatsworth, Hardwick Hall, and other great houses for which she was responsible -- letters and contracts (called “bargains”) and account books. We learn from them how deeply involved Bess was with every decision and how closely she monitored each step. She bought land for its income, but also for its resources, so that if she needed, say, marble or timber, she already owned a source. She also micromanaged her large family, marrying two of her children to two of her stepchildren. Then there was her granddaughter Arbella Stuart, the focus of various political plots, whom Bess kept very close at home into her twenties.
Not all of Bess’s mansions have survived, but her masterpiece, Hardwick Hall, is still there, with its unusual floor plan, four great turrets and elegant mantels. By the time you finish this book, you will want to head for England on the next flight to visit it.
Source: A copy of this book was provided by Harper Collins for review purposes.
Posted by CLM