A Killer in King's Cove by Iona Whishaw 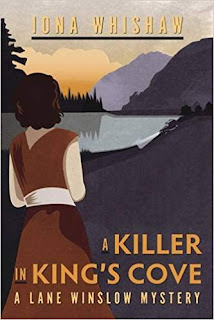 Plot: Lane Winslow wanted to get away from London after the horrors of the war but no one was expecting her to take her modest inheritance and buy a home in western Canada.   In King’s Cove, a small town in British Columbia, Lane is welcomed by her new neighbors.  She hopes to begin a literary career but is distracted by the discovery of a dead body, found in the creek adjoining her property.  Lane does not recognize the man but when her name is found in his pocket, she becomes the police’s most likely suspect.

My Impressions: This is a delightful mystery, and will appeal to fans of Maisie Dobbs, who like character-driven, leisurely paced narratives.  Lane is an attractive heroine, whose heart was broken during the war but she is determined not to think about Angus or to look backward at all.  She has moved on from her espionage work during the war and is enjoying King’s Cove, even if her house is slightly haunted by its previous owner.  When murder intrudes on this small town, secrets start coming out everywhere and if I were Lane I would keep my doors locked and not go outside after sundown!   My favorite characters other than Lane were Inspector Darling and Constable Ames.  Inspector Darling served during the war and has invisible scars like Lane.  He is reluctant to suspect her of murder and is annoyed with himself for being so reluctant!  Constable Ames provides comic relief and recognizes that Inspector Darling and Lane are not indifferent to each other.  In fact, the conversation between Inspector Darling and Lane is great fun and gives one great hope for future books in the series.

Off the Blog: On my way to Denver for the Cities for Financial Empowerment Conference!  Excited for my first visit to Beany Malone country.  I went to the famous Tattered Cover bookstore tonight; I was disappointed they weren't carrying either Beany Malone or Lane Winslow but don't worry, I did not leave empty handed.
Source: Library, but I have now purchased the second in the series.