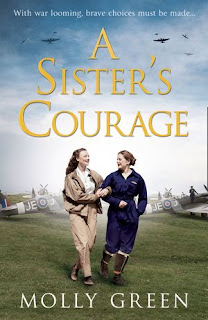 
After the war begins, Raine applies and is eventually accepted to the Air Transport Auxiliary where women are allowed to fly planes, not in combat, but mostly ferrying the aircraft to locations where they are needed. It can be dangerous work because the equipment is not always well maintained and appears rudimentary at best. The men in uniform are primarily hostile due to her gender, sexually abusive, or fall in love with her, although there are a few who simply value the hard-working women in uniform. Raine copes with various challenges, including family complications and two men who love her. The real heroine of the story is Pauline Gower, the British pilot and writer who established the women's branch of the Air Transport Auxiliary during WWII and died tragically young at 37, giving birth to twins.
My Impressions: Historical fiction about women coping with war, either at home or at work, has fascinated me for as long as I can remember, and I was delighted to be invited to read the first book in this series. The author’s research on WWII and the role of women in the Air Transport Auxiliary, including not just the planes they flew but also detail about the aircraft they flew and where they lived locally, was thorough and well done. I often wonder what I would have done had I lived in that era: I would like to have been decoding enemy messages at Bletchley Park but I am not very good at puzzles. I don’t think I would be good at nursing or flying either, and am sure I would hate being a land girl (the goal of Raine’s sister Ronnie). It might have to be espionage, although not the type of adventure where one parachutes into Occupied France!

This genre of historical fiction is fairly common in Britain and quite enjoyable, although lighter than some of the recent WWII bestsellers such as All The Light We Cannot See and Those Who Save Us.  For a link to my favorites, click here.  There were some things about the story that bothered me, however, and could have been improved upon with a good editor. The characters seemed too generically drawn and thus were not very memorable; moreover, Raine is not a likeable heroine (she is apparently so beautiful that men overlook or are amused by her rudeness). When the book begins, like many 17-year-olds, she is self-absorbed, dismissive of her mother’s concerns about her and insensitive about the family’s financial worries but, although she cares about her sisters, she is unnecessarily rude to others. Also, if you had learned a close friend got pregnant and is still devastated by having been abandoned by the father and her family, wouldn’t you hesitate about sleeping with someone you have only met a handful of times? I also thought it was odd that Raine’s friend and flying instructor, with whom she had never even had a flirtatious correspondence, would suddenly assume their relationship should become romantic, with no encouragement. One could imagine his hoping their relationship would evolve once she matured, especially when enduring wartime trauma, but he made a lot of assumptions. These were all issues the author could have addressed, as well as choosing a more meaningful title (of course, I know from my days in publishing that sometimes the publisher rather than the author selects the title). Despite these quibbles, I will look forward to reading the books about Suzanne and Ronnie coming later in 2020.

I was reminded of Betty Cavanna’s A Girl Can Dream, published in 1948 (now available in Kindle), not long after the setting of Molly Green’s trilogy, but set in a world closer to Happy Days than wartime Britain. In that book, Rette Larkin, another girl who disdains typical teen activities, yearns to fly like her older brother, who was a WWII pilot. When her local airport announces an essay contest for flying lessons, Rette writes about “The Dream of Flying” and wins. Of course, Rette’s worries are trivial compared to Raine’s – no sexual harassment in Betty Cavanna but lots of angst about a high school dance. When she gets a date at the last minute, even a would-be aviator wants to “press [her] plaid taffeta” and wash her hair and get a manicure. In contrast, Raine encounters a German bomber and nearly loses her life because the Women’s Auxiliary do not carry weaponry.  Obviously, these books were written for quite different audiences.  Green is appealing to a target market nostalgic for the heroism on the home front during WWII and possibly also for fans of Downton Abbey, set a generation earlier.

Off the Blog: I am tidying up in preparation for hosting my Book Group but it is so easy to get distracted by the piles of books everywhere.  Oh well, I suppose my friends are used to that. We are reading The Game: Harvard, Yale and America in 1968, by George Howe Colt, which I highly recommend.

Source: I was provided a copy of this book by the publisher, Avon Books, and TLC Book Tours for review purposes. You can visit other stops on the tour and read the reviews by clicking below: