Lorna Hill (1902–1991) is best known for a series set around the Sadler’s Wells Ballet School about girls aspiring to become ballet dancers.   She began writing stories about ordinary children to amuse her daughter Vicky but when Vicky went away to study dance in London, she began her Sadler’s Wells series.   Hill was graduated from Durham University in 1926, in an era when women did not traditionally attend university (ten years later, at Barnard College in New York, my own grandmother was the first in her family to graduate), and met her husband there.  He was a minister, and they lived in Northumberland, doubtless in versions of the impractical rectories she describes in her books.

Veronica is devastated by her father’s sudden death, and by the loss of her familiar London life, friends, landlady, and dancing lessons.  When she is sent to live with affluent cousins in far-distant Northumberland, she is determined not to give up her dream of becoming a dancer.   Snobbish cousin Fiona is a thorn in her side but cousin Caroline becomes a friend, and their cousin Sebastian who loves music as much as Veronica loves ballet is the one person in her new life who really understands her – although often infuriates her. 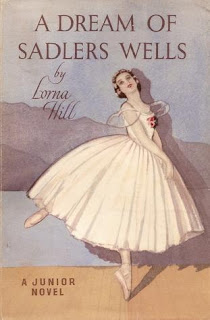 You know how much I like orphan stories, and Veronica is a candid and appealing heroine!  She is single-minded about ballet but she has a sense of humor and a great capacity for friendship. I believe only the first two books about Veronica and the fourth in the series about Caroline were published in the US; somehow Clare and I found and enjoyed them.  It wasn’t until I was in my 30s that I learned there was an entire series and numerous other books by Hill.  She wrote 42 books, of which I am still missing two. 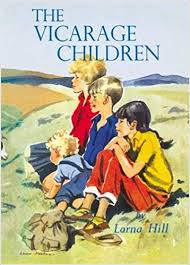 Hill relied on her experience as an Anglican minister’s wife for this three-book series, which is family, not career-focused, set in a tiny town in Northumberland.  The father is devout and absent-minded, oblivious to the fact that his daughters can’t afford even an occasional new dress and rely on hand-me-downs (but not from parishioners, thank goodness).   The mother is beautiful but tired, used to scrimping; Ally, the oldest sister, complains a lot and gets into financial jams; Mandy who is nearly 14 when the series starts is the glue of the family; Michael becomes obsessed with archeology; and the youngest is Binny, a supposedly precious toddler, beloved by all, although Mandy seems to spend most of her time caring for him and I got tired of him by the third book.  They live just south of Hadrian’s Wall, and Roman ruins play a large part in the story.  These remind me a little bit of Geoffrey Trease's Bannermere books.

There’s no real reason why I should be the one to write this story, except that I’m the only person in our family who ever finishes anything, and, as every author knows, it’s easy enough to start a book; it’s when you get to about the third chapter that the difficulty begins.  Either the quarantine for the infectious disease you’ve been suffering from has run out, or something crops up . . .    Mandy, The Vicarage Children

I've been wondering if a lot of books will result from the current quarantine!  As I said in my pandemic reading guide, I prefer books that don't dwell on our dystopian nightmare.

Mandy and her siblings have entertaining adventures and eat delicious-sounding food but what I liked best about the series is the sense of place.  Despite no electricity and no running water, the vicarage and its environs are lovingly described and even Ally is delighted when she comes home from boarding school. In the third book, the family finally gets a holiday and I forgive Ally being a pain because on the strength of one week’s driving experience, she drives the family car all the way to Skye, which would scare anyone.  Hill’s description of Skye made me determine to plan a trip, once one can do such things again.   I also like Ben Logan, son of the local squire, who starts off admiring Ally but gratifies me by shifting his attention to Mandy, by the third book.   There is also an appearance in The Vicarage Children in Skye by Annette Dancy of Dancing Peel.  Hill realizes how much her readers like hearing about favorite characters and they appear and reappear in different books.
It is a pity Hill makes fun of her American characters for their enthusiastic tourism and using the word “cute” to describe Roman artifacts, which is unfortunate but forgivable. I suppose it never occurred to her we might be reading her books too!

By the way, when I decorated the guest room, where most of my children's books reside, my sister encouraged me to use accent paint in this white bookshelf and I am so pleased with the way it turned out.

I have never come across any Lorna Hill books but I'll definitely look for them now in any secondhand bookshops I find - if we are ever able to go to those shops again, and presuming that some might survive this lockdown. I'm interested in children's books and am trying to catch up with any I missed out on as a child. The description of the poverty stricken family life of a church minister rings true according to the ones that were in my husband's family in the past.

So interested in the Lorna Hills books. Her heroines who pursued careers--very interested in the titles that might have been dance or ballet. What other careers did they pursue?
And I'd be so interested how you found your collection. Were they published in the U.S.? In which decades?? Curiosity abounds!

These books do sound like a good way to read about the place and time. It is amazing that you have found so many of them. The vicarage stories sound the best to me. I like the idea of them living near to Hadrian’s Wall; I know so little about that.

We do have a shelf of some children's books but mostly picture books, like the Eloise books or Graham Oakley's church mice books. And those we have had since my son was a child and we haven't added much since then.

And that bookcase with the accent paint is very nice.

I am worried about library book sales and used bookstores - and "new" bookstores too, Katrina! I buy a fair number of books but I know I don't buy as many as I used to, and having worked in publishing for 17 years I feel great angst about its issues. That is why I try to patronize Amazon as little as possible.

Lorna Hill is mostly unknown in the US, although at least three of her books were published here by Henry Holt in the 50s. One of the books in my collection turns out to be from my sister's junior high (I get all the bad press in my family for failing to return library books - so unfair) but most were bought expensively over the years from the UK, Judith. Hill's heroines are mostly interested in ballet but a few prefer Spanish or Scottish dancing and I think some want to work with horses.

I have read two more since I wrote this, and am entranced by something she calls "Singin' Hinnies" which appears to be a cross between scones and pancakes. Such great food descriptions!

I have been to Durham and to Edinburgh but not to Hadrian's Wall. Yet! I am not brave enough to drive on the wrong side of the road.