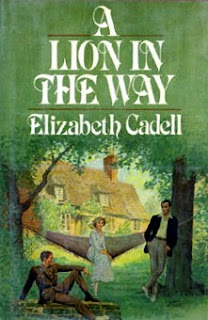 Description: Annerley Brooke (whose name is really Rosalind Anna Lee, after her deceased mother) has been brought up frugally in India with her maternal grandmother, and father, who coaches the sons of affluent Indian families before they are sent to away boarding school. Her closest friends are two very different but equally imperious young women, Shareen Prebdel, who is from a cultured Indian family, and Moira Fenwick, whose parents are well-off but not very nice. Shareen and Moira are jealous of each other’s demands on Annerley’s time but have much in common, including brothers at the same school in England. When Annerley’s father decides it is time for Annerley herself to go to England to school, he arranges for her to be a day student and live in a modest cottage near Exeter with her grandmother. Despite hating school, Moira decides to go too and begs Mr. Brooke to coach her so she can be in Annerley’s form.

The Great War begins while Annerley is at school in England. Her father enlists and is captured in Greece, where he is interned. Moira’s brother Mark is wounded and comes to Devon to recuperate, bringing Shareen’s brother Chandra, who is now at Oxford. There follows the happiest summer of Annerley’s life, simply hanging out with friends roughly her own age. At the end of the summer, her quiet grandmother dies, and Annerley pays a visit to her paternal grandmother, the ruthless woman who disowned Mr. Brooke when he married below him, but she is determined to go back to India to recapture the happiness of her childhood. However, India has not stood still in the years she was gone and, to Annerley’s surprise, the Prebdels have become followers of Ghandi and of the Indian people’s fight for independence, which makes her homecoming very different from what she expected.

My Impression: In many ways, this is Cadell’s richest yet most melancholy book, and reflects that she herself was born in 1903 and brought up in Calcutta.  She was essentially the same age as her heroine.  Annerley’s love of India is simple, reflecting her openness to the people, both native Indians and everyone else she encounters.   She is beloved in return.  Her world in India is wider and more colorful than her life in England, although that expands when her friends' brothers appear on the scene.

I much prefer the simultaneously sophisticated and idealistic Chandra to Moira’s handsome brother Mark, who never lets Annerley finish a sentence. It was obvious to me in this reread that Chandra and Annerley had feelings for each other that are never articulated because after his father visits Chandra is reminded there is an arranged marriage in store for him and a duty to fight against British rule. Chandra also knows Mark loves Annerley and basically tells him to go for it. I think Annerley loves them both:

Annerley was silent because she was struggling under a weight of depression . . . Her feelings were too confused, too uncharacteristically pessimistic to analyze; she knew only that she seemed to feel in the air a sense of doom. In these past few moments, something pleasant, something happy had come to an end. Something that she had treasured had slipped away.

She tried to regard the situation in the light of common sense. This has been a lovely, lovely summer, but summers had to end. In this small patch of garden, the four of them had met, talked, enjoyed one another’s company. There would be other gardens, other sunny days, other happy meetings.

But at this moment, she could not believe it. Something told her that the end was here and now. 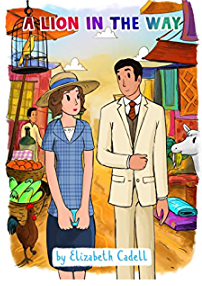 Chandra reminds his friends he is Hindu, and maybe Cadell’s readers even in 1982, let alone in 1917, would have disapproved of a mixed-race, mixed religion romance.  The charming young man who lives downstairs from Annerley and her father in Calcutta in the early chapters is shunned because he dates Eurasian young women; flouting the rules gets him sent back to England.  On the other hand, Mr. Brooke lives mostly apart from the English community because he wanted to be able to mix with Indians.  That was his vision of living in India.  Of course, we know that many of the British enjoyed the society and the inexpensive servants, which provided a way of life they would not have enjoyed back home.  The book is full of fascinating characters but I found it hard to like the father Annerley worships.   He did nothing to help his mother-in-law make friends and feel comfortable in India, simply because he disliked the English way of life in India.
I was not familiar with the idiom of a lion in the way, which means the difficulty, obstacle, or danger impeding one's progress that causes one to immediately or prematurely abandon one's duties or ambitions.  It apparently derives from Proverbs 22:13: ‘The slothful man saith, There is a lion without, I shall be slain in the streets’.  So in this context, I suppose the lion is the obstacle between Annerley and the return to India and her father she craves.  Do you agree?  She cannot recapture the life they had before the War because that world has changed.
Links: Amazon * WorldCat
Source: Library
Posted by CLM

Wow...this sounds like a fascinating story, with Annerley having to move between two such different worlds. And it's a time period that I really like, too. I'm so glad you reviewed this one. :)

I have not yet read this Cadell novel, although it does sound interesting. Just based on the title and the summary, without your explanation of the "lion", my thoughts went to the "British lion", and that it was the British Empire that was in the way? But a quick search shows that the lion (or group of three lions) has been used as a symbol of both India and of England. (And one lion a symbol of Scotland!)

So the Lion "in the way" might be both English and Indian nationalism! I must give this book a read soon. Thank you for your review.

A lovely companion to this read might be Cadell's Sun the the Morning, a set of three childhood friends in British India, the sunny beginning of this tale, without the grown up bits. I had the good fortune to listen to the audiobook version narrated by Cadell's great grand daughter.

Now this really intrigues me. I wonder how a 1982 book captures the last days of British Raj in India. Historically, it was certainly a time period of tremendous upheaval. But looks like the author has given it a melancholic but ultimately more accessible flavor. Thanks for bringing up these old gems!

I can see that this would be a fascinating, rather sad read, but very good. Oddly I've never read anything by Caddell, I don't know why. It reminds me a little of the non-fiction account of the early life of M.M. Kaye, The Sun in the Morning, which was so good.

This does sound very good. I haven't read anything by this author, but it looks like I should. Not that I need to add another author to my list right now.

I've been looking for comfort reads recently so no surprise I've landed back on Cadell and, coincidentally, have just had this arrive via inter-library loan. While I've read many of her novels, this one is new to me and I'm looking forward to seeing what I make of it.

I've just finished this and found it very intriguing but, ultimately, not very satisfying. It didn't feel recognizably like a Cadell book to me but in the best possible way - everything felt more detailed than in her light romances, and far more personal. But...Moira. If she could have been left out of the book, I could have read it so much more happily. Right from part one you can see what she has in mind and I found that quite unsettling as I read through the remainder of the book, knowing what she wanted and feeling deeply uncomfortable with it for a number of reasons. As for Annerley's romantic options, I do wish Simon had earned some real consideration!

I think you are exactly right, Claire: there are recognizable Cadell parts (the heroine who says little but knows exactly what she wants; the opinionated friend who never stops talking but has the heroine's best interests at heart; the semi-hostile older female relative but the overall themes are quite different from her usual books and we do read them for comfort, don't we. I like Moira and admired her ingenuity in asking Edwin for help to prepare for school. My first read was probably when I was a teen so I certainly did not see their relationship evolving. On this reread, I suddenly thought, "Oh dear, I think I remember what is going to happen." And you are right, Simon might have been a better option than bossy Mark.