I stopped at my childhood library the other night to pick up a reserve, and as I was leaving I saw a room full of discarded books and a sign that said “$1/per book, $5/per bag.”  Reader, I had to poke my head in, although I only had a few minutes to spare.

A quick glance perceived no treasure and nothing worth lingering for but then I saw the very copy of Jack and Jill by Louisa May Alcott that I had borrowed as a child.  I am tempted to criticize a library half an hour from Concord for discarding one of LMA's books but it was never one of her most popular so circulation is probably very low. Still, it deserved rescue!  And once I had one book, it seemed only sensible to fill a bag, even if the pickings were slim . . . 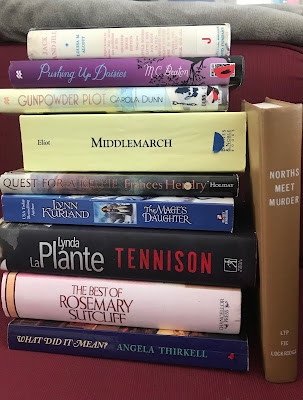 Pushing Up Daisies by M.C. Beaton – Agatha Raisin is a private detective who has just moved to the Cotswolds.  When I saw that, I thought, wouldn’t it be nice to be on holiday in a thatched cottage right now?  With one of those local characters who filled the kitchen with scones and groceries before our arrival and without any inconvenient dead bodies (or would that be part of the fun?).  This is #27 in a series I have never read.

Gunpowder Plot by Carola Dunn – I reviewed the first in the Daisy Dalrymple series in December and this one is #15!  Despite my usual rule about reading series in order, I suspect it won’t make a lot of difference in this perky cozy and the title caught my eye because of my long-standing interest in Guy Fawkes.

Middlemarch by George Eliot – I shouldn’t have given away my Penguin edition unread as I know there will be a time in the future when I am ready to read this classic. 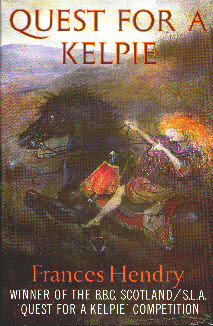 Quest for a Kelpie by Frances Hendry – this is a children’s book set in 18th century Scotland.  I remember reading and liking her better-known book, Quest for a Maid many years ago.

The Mage’s Daughter by Lynn Kurland – I picked this up without looking at it closely because I know my mother has enjoyed some books by this author.  However, it’s part of a fantasy series which I wasn’t expecting.  It got good reviews so she may well enjoy it.

Tennison by Lynda La Plante – this may turn out to be the pick of the day.  It appears to be a novelization of the TV show, Prime Suspect, which my father used to watch. He was a big fan of Helen Mirren who played Jane Tennison.  I can’t tell if it is really autographed or if the publisher designed the title page with a facsimile signature.  Have you read this series or watched the show? 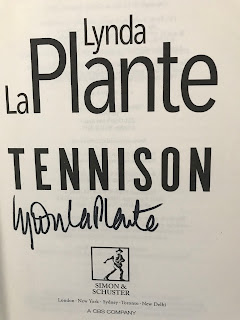 The Best of Rosemary Sutcliff – my mother loves Sutcliff so much she wrote her a fan letter, but I still have some unread.  I enjoyed Simon in 2020, and this volume includes three of her most famous books, Warrior Scarlet, The Mark of the Horse Lord, and Knight’s Fee.

What Did It Mean by Angela Thirkell – I knew I already owned this but it is such a nice paperback, I figured another Thirkell fan would need it.

Last but not least -

Jack and Jill by Louisa May Alcott - Jack and Jill are best friends who have a sledding accident and have a long recovery together, although Jill is just a poor neighbor.

When I said that I was late because I had found my own copy of Jack and Jill at the library, my mother responded, “I don’t remember your owning Jack and Jill,” and I explained that once I have checked a book out of the library I have a proprietary interest in it (a more sarcastic person than my mother might have asked if that was why my library books were often overdue).  It is true that the only Alcott I owned were Little Women (her copy) and Eight Cousins, Rose in Bloom, and Under the Lilacs in beautiful editions that must have belonged to my father’s Aunt Lillian.  Eight Cousins is certainly my favorite.  My sister pointed out that if Jack and Jill wasn't a favorite, there was no need to add it to my shelves.  Technically, I suppose that is true.  When you put it that way, a stronger person might have walked right past that room! 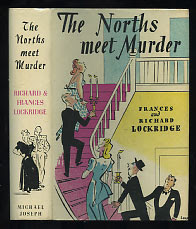 The book I initially went in to check out was The Norths Meet Murder by Frances and Richard Lockridge, the beginning of a well-known mystery series about a sophisticated New York couple, first published in 1940.  I recently came across a review of the final book in the series and decided I should try it.  Checking these books out of the library also helps their circulation so they remain on the shelves and accessible, rather than turning up in someone’s $5 bag!

Would you have walked by without taking a look?

There's no way I could have passed up a bookish temptation like that! And I know I would have easily filled a bag. :D

OOH, there are so many things I want to talk about here.

Eight Cousins and its sequel Rose in Bloom were my favorites too, reminded me so much of Anne of Green Gables. George Eliot is one of my favorite authors ever since I read her Mill on the Floss, and Middlemarch is an incredible book. I do hope you'll give it a try! And I'm a huge fan of Helen Mirren too -- I think I've seen a few episodes of Prime Suspect, thought they were pretty dark for a 1990s show.

I'm picking up Kelpie and Sutcliff's books, and maybe even The Norths. Thank you for the recs!

I should say you did exceptionally well! The Middlemarch and Rosemary Sutcliff 'alone' are surely worth $5! As for Daisy Dalrymple, by book 15 there will be major character and life developments but I'm sure you will have guessed what from book 1. Oh, and an Angela Thirkell! I haven't read that one. Yes, we used to watch Prime Suspect many years ago. A very classy crime series.

Nope, I could not possibly have walked past that room without going in.

I am coveting the Rosemary Sutcliff. I've read Mark of the Horse Lord (and thought it was dynamite) but not the others. I love omnibus editions, more bang for your buck.

Yes on Eight Cousins! I must have read Jack and Jill, but it's not my favorite. Agatha Raisin is fun, and it probably won't matter that it's later in the series. Sutcliff-- I may have just one of her books left in the library. So many had the Cuffari covers which were the kiss of death for books for some reason! Glad you were reunited with "your" book.

No, never! I have never read the AGATHA RAISIN books, but I have watched the quirky British television series. This was a fun post!

How fun! I never could have walked by without going in. I would also like to read the North series and Rosemary Sutcliff is a gem.

I couldn't possibly have walked by! I think you got some really good books. I've read a lot of the Agatha Raisin books, silly but entertaining. I'm quite a fan of Sutcliff and I would have bought Gunpowder Plot too. I'll have to see if I can find Quest for a Kelpie. I liked Middlemarch but preferred The Mill on the Floss. What a haul!

It looks to me like you did very well. I would not be able to resist either.

I have been trying to decide whether I want to read the Daisy Dalrymple series in order or not. I have read the first, have the second, and then after that I have #5, #11, and #17. Probably I will give up on trying to read in order.

Regarding The Norths Meet Murder, I enjoyed books in that series a lot many years ago. I have read some of them more recently, and I still find them enjoyable, although sometimes I get irritated at Pam getting herself in dangerous situations. I will be interested in what you think of the first book in the series.

Glad to find so much appreciation for Eight Cousins, which I think is the most accessible Alcott these days and my favorite. However, I did get my niece Katherine to read An Old Fashioned Girl recently for a discussion I was leading and she said she liked it.

Ms. Yingling, is historical fiction popular in your library at all? My brother went through a phase where he was irritated his children only wanted to read and reread Harry Potter and Rick Riordan and begged me to find historical fiction they would read, especially Geoffrey Trease, a favorite of their elders. His 8th grader is a very serious student but when on vacation will read what I give him so maybe I will lend him the Sutcliff before I read it.

Ellen, I didn't know there was an Agatha Raisin television series! Now that I have Netflix I can explore these things, although Prime Suspect (if available) may come first. I am currently watching Mare of Easttown.

My mother has disclaimed all knowledge of Lynn Kurland so I think I must have been thinking of Lynn Kerstan, a romance writer and Dorothy Dunnett fan!

I will have to return the Norths to the library so that may be the first one I read!

I have started the Norths series and am really enjoying them so far. Each book is stronger than the next, and they are very sly and funny. They've been released as ebooks too.