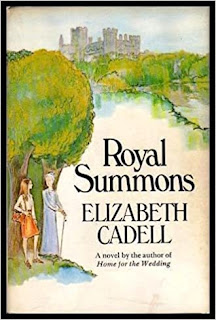 I got a lot of reading done in September considering I was away for more than two weeks. This may be why my suitcase hasn’t made it back up the attic and the lawn needs to be mowed!

Fiction
Royal Summons by Elizabeth Cadell – American Ellen Berg travels to her mother’s childhood home in England where she has to come to terms with the imperious aunt who drove her mother away.
The Long Way Home by Robin Pilcher * – Claire has made a new life for herself in New York but when she learns her stepfather is ill, she returns to Scotland and the memories of the unhappily blended family situation that caused her to leave.  Note, Robin is no Rosamunde, although has tried to cash in on his mother's name.  My review.

A Stranger in the Mirror by Sidney Sheldon – Sheldon may have been one of the most successful television and fiction writers of the 20th century but this has to be one of the worst books I have ever read – about two Hollywood stars who take diabolical pleasure in making everyone around them miserable.

The Last Thing He Told Me by Laura Dave – I enjoy this subgenre of suspense in which someone finds out in the first chapter that a character close to her is not who she thought he was.   My review. 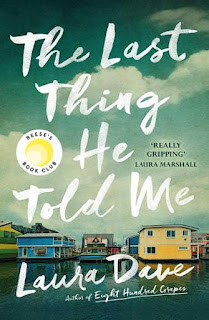 Death in Provence by Serena Kent – Penelope buys her dream home in Provence and then finds a dead body in the swimming pool. This book is a pleasant but not very suspenseful mystery wrapped in wish-fulfillment about living in France. I don’t think I would want to live somewhere I didn’t know a soul.  Kent turns out to be a husband-wife team of Deborah Lawrenson and Robert Rees.

All the Devils are Here by Louise Penny – Armand and Marie-Reine are visiting Paris where Annie is about to have a baby when a mystery breaks out. It is interesting to see how Armand operates outside Quebec and I started this right before I went to France so was thinking about it while in Paris. Another Penny gem.

Madam, Will You Talk? by Mary Stewart – This book was the inspiration for my trip to Nimes and Provence. I have read it so many times I practically know it by heart.

Last Girl Ghosted by Lisa Unger – Very readable but forgettable suspense. I worked briefly with Lisa years ago at Berkley so enjoy checking out her books from time to time.

Down Under by Patricia Wentworth – This is the fourth in the Benbow Smith series. My review. 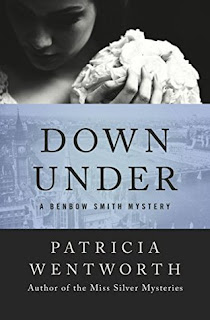 A Flicker in the Dark by Stacy Willingham – Chloe has spent half her life coping with the fact that her father is a serial killer. When she tries to get married and move on with her life, the murders begin again. Review to come.

Eden Falls by Jane Sanderson * – Set in England and Jamaica, this is a historical novel about several intersecting families (nobility and not) from a Yorkshire town. My review.

Battle Royal by Lucy Parker – This much-awaited romance, first in her Palace Insiders series, features two rival chefs who detest each other. Until . . . 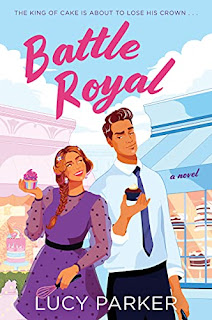 How to Fail at Flirting by Denise Williams – Naya’s friends think she is too uptight so they persuade her to create a risqué to-do list.  My review.

Another Lady: A Biography of Constance Savery by Eric Schonblom – This book is a labor of love written by a fan of the English children’s author whose best-known books are Enemy Brothers and The Reb and the Redcoats.
* from my 20 Books of Summer list – still plugging away!
Posted by CLM

Years ago, I read quite a lot of Cadell and really liked her. I think I was even in a Yahoo discussion book about her! The olden days. haha.
I read An Ocean Apart and A Risk Worth Taking, and liked them but another I tried, Starburst I didn't finish. This was way back in 04 and 06. I wonder if I would like them now.

Several of those I fancy looking up, Death in Provence for instance. We have a new series starting on TV tonight, A Year in Provence (nothing to do with Peter Mayle's book) hosted by actor and writer, Carol Drinkwater, who moved there to live on an olive farm years ago. I also have Lawrence Durrell's book about living in Provence to read.

To Cath: I sure hope that show comes over here via Acorn or Britbox!
And I must look into the Durrell book. I did recently (twice) try to reread The Alexandria Quartet, and could.not.read.it. I guess my 20 year old self and my 70+year old self have different tastes, as least where these books are concerned! I am more a fan of Gerald now, not Lawrence.

Nan, I also started Stardust but didn’t finish. I think his books are readable but lack the warmth and depth of Rosamunde’s - I feel like he was just trying to cash in on her name.

Cadell’s books are very mannered and are usually predictable but are great fun and are definitely comfort reads. It is nice they are back in print but I doubt they are being found by new readers.

I agree we would enjoy the show Cath mentions.

I just got All the Devils are Here by Louise Penny at the book sale a couple of weeks ago, plus the book that preceded it. So now I have most of the books I need to finish the series. It will still take me a while.

For Nan: I'll keep my fingers crossed that you (and Constance) can find A Year in Provence. Maybe YouTube? I recorded it and will watch it soon. One of Dirk Bogarde's biographical books is about living in Provence too I believe.

LD's Provence book is called Caesar's Vast Ghost: Aspects of Provence, but I think there are others. I read his Sicilian Carousel a couple of months ago and enjoyed that. I haven't read any of his fiction but have the first Alexandria book, Justine, on my library pile. I'm intrigued to see how I feel about it. And Gerald was indeed wonderful. I was so touched when I read that he felt that his biggest supporter with his writing was his brother, Larry. And now I feel like reading the Corfu books all over again...

Any mention of Scotland, and I need to read it (the older the book, the better) -- so even though I've never read books by Pilcher (Rosamunde or Robin), I'm going to add The Long Way Home to my TBR.

Lex, have you read Kate Atkinson's Jackson Brodie books? One of my favorites is set during the Edinburgh Fringe Festival (which I long to attend). Katrina, I wonder if you are close enough to do day trips? I assume the hotel rates go up dramatically. Or do locals prefer to stay away?