I found two unread YA novels for the 1976 Club, hosted by StuckinaBook and Kaggsy’s Bookish Ramblings. 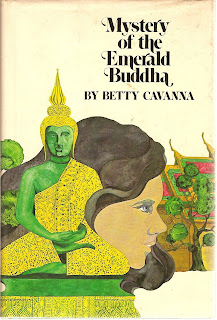 Mystery of the Emerald Buddha by Betty Cavanna (1976)
Cavanna’s writing career extended from 1943-1987 and although she is best known for her teen romance/coming of age fiction (sometimes called malt shop books), she wrote several mysteries under this name and more as Betsy Allen. She lived in nearby Concord, Massachusetts with her second husband but I was amazed to read in her obituary that she spent her last years in Vézelay, France, from which I just returned! I really can’t imagine someone in her 90s retiring to this steep little town – there’s a story there, I am sure. Cavanna had just one son, a sociologist who has apparently spent a lot of time in France, so that is probably the key.This book is a mystery featuring sixteen-year-old Lisette who has been brought up in France by her mother but is spending the summer in Thailand with her American photographer father, Alexander Paul. He is collaborating on a coffee table book about Thai art with a curator from Boston’s Museum of Fine Arts. Lisette is intrigued by Bangkok and the famous Emerald Buddha which has its own elaborate shrine. When the Emerald Buddha is stolen and the book project threatened to be shut down, it is Lisette’s quiet maturity and observation skills that enable her to find it when the police are stumped. While the story does not have as much dimension or fully developed characters as some of my favorite Cavannas – Spring Comes Riding or A Girl Can Dream – it was interesting because of its exotic setting. This is my twenty-fifth book in the Cloak and Dagger Challenge hosted at Carol's Notebook.
Is this book reflective of the time? Lisette's father assumes Kyle Goodfellow, the academic who will write the text of his book is a man: she turns out to be a very attractive young blonde.  She is portrayed as more astute than he, not to mention more in touch with Lisette.  However, by the end of the book, he is smitten so at least he is not afraid of smart, educated women (we never find out why he was such a neglectful father to Lisette after he and her mother divorced).  Only a few of her books are set outside the United States and I only recall one other (Jenny Kimura) which has a heroine who is not American. 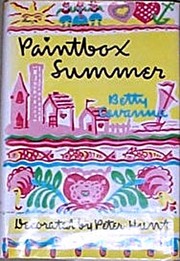 Note: if you ever come across a copy of Paintbox Summer, grab it! The “decorations” were done by Peter Hunt, a folk artist based on Cape Cod, and it is one of her most popular and rare books.  It is set in Provincetown where heroine Kate spends a summer working for Hunt. 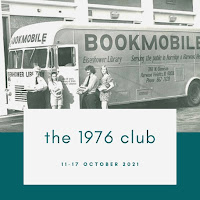 In Her Father’s Footsteps by Bianca Bradbury (1976)
This is a very slight Scholastic paperback about Jenny Wren, a serious high school student who lives with her widowed father, a kindhearted man who is a good vet but a poor businessman. Jenny plans to go to vet school and join her father’s practice but her life and college fund are disrupted by a fire that destroys Dr. Wren’s animal hospital and then by her father starting to date. There is a geeky boy who distracts her and her father’s girlfriend finally wins her over in this pleasant but unremarkable story. 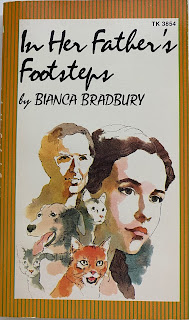 Bradbury was another 20th-century author who specialized in books for teens and the contemporary issues that became popular to address in the late 60s and 70s. She loved animals, as evidenced here. My libraries didn’t have a lot of her books and the only other one I remember reading is Lots of Love, Lucinda about a family that invites a Black student from the South to live with them and the well-intentioned but extremely awkward way they handle it.  That book might be more reflective of the period than this one, although no one doubts that Jenny can become a vet so long as she keeps her grades up.  Given how hard it is to get into vet school, maybe she'd be better off studying all the time although the message of the book is that it's healthier to have a variety of interests, including a boyfriend.
I reviewed another YA novel published in 1976 earlier this year:
The Rising Tide by Mabel Esther Allan.
Posted by CLM

It sounds like you're having a great time with the 1976 Club challenge. I don't know any of these authors but they sound like Mary Stweart for young adults to me. What do you think?

I cannot believe someone would steal the Emerald Buddha! This sounds like a great plot.