• The New England Betsy-Tacy Group gathered on Sunday to make bookmarks for a December exhibit at the Arlington Public Library.  Some colored the illustrations, some cut rectangles of colored cards, some glued the pictures onto card stock, and some attached ribbons.  Our hostess will gently recolor any bookmark in which someone accidentally mis-colored a character's hair as we wouldn't want to mislead a future reader!  Everyone nibbled caramel cashew squares, cream cheese brownies, popovers, and potato chips with dip as we worked. 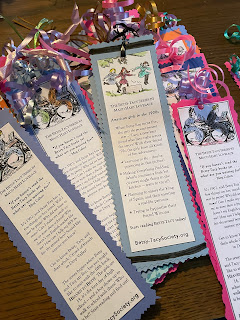 • The other night, my library hosted a cookbook sale and talk by Odessa Piper, a local foodie/former restauranteur.  I was tired after a day at work in which my coworker ignored all the talking points I had laboriously created and contradicted several things I had previously told our colleagues.  Sigh.  But I rallied and drove over and when I saw the cookbooks were 3 for $1, I picked up six.  I was looking for Hungarian cuisine but figured this Czech cookbook would be fairly similar. 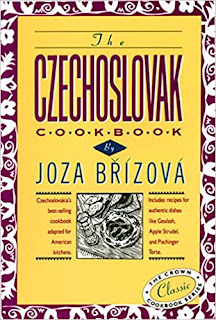 • Odessa talked about cooking with sorghum.  I had no idea what that was and I suspect others in the audience were similarly clueless (someone asked cautiously where one buys it).  It turns out to be a grain but she said people who like brown sugar would also like the flavor so I think she must have been referring to sorghum syrup.  I asked if she would share a recipe for the Friends of the Library’s newsletter.  She is working on a cookbook and her husband is a wine expert so they must have some delicious meals at home.  Someone asked what is her most important advice to cooks/bakers and she said to read the directions twice before you start!  I was not the only one in the audience who hid my face in shame.

• Yesterday I went to get an ID to use Harvard’s Widener Library so I can make some edits to an article on Noel Streatfeild.  It took longer to find a parking place near Harvard Square than to get my picture taken.  However, as I walked down the 8th-floor hallway in what used to be Holyoke Center I passed a campus police officer with a trained canine.  He saw my interested look and asked if I’d like to pat Sasha, which I did.  She accepted my pat and friendly words but looked at him for approval.  He told me they had just been to get her a new photo ID!  When I reached the office and mentioned the encounter, the staffer showed me the dog’s photo ID which had been a bad take. “What, did she blink?  Did she say that was her bad side?” I asked.  I told them about Robert Crais’ series about a detective and his bomb-sniffing dog Maggie, and one of them wrote it down for his mother. 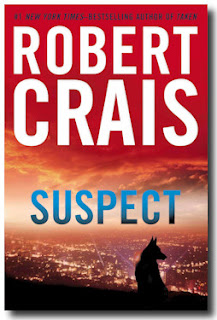 • Many years ago, in my first week at Avon Books, I got sent several blocks away to the parent organization to get a photo ID.  The person who usually took the photos wasn’t there and after I’d waited about half an hour for him to return, his amiable boss said he would try to do my ID.  As he fiddled with the machine, he asked what division I worked in and when I said I worked in publishing, he said, “Ah! My wife’s written a book.”  Deflecting hopeful inquiries becomes automatic so I quickly said, “That’s great.  I’m not an editor but I wish her good luck.”   He looked at me and said, “Oh, she has a publisher already. Simon & Schuster.”  Relieved, I said, “Oh, good.  What is the book about?”  He told me it was a mystery and said meaningfully, “My wife is Patricia Hearst.”

It took a minute for this to sink in and I wondered if he was crazy.  “Your wife is Patty Hearst?”  When I got back to my office, I ran into our president and I told him about this encounter.  “Oh, you met Bernie?” he said.  He reminded me that Patty Hearst had married her bodyguard, a former policeman, and the family put him in charge of security for Hearst, Avon's then parent organization.  The book, Murder at San Simeon, did not get great reviews although there was a curiosity factor.

What a brilliant, fun post, Constance. Loved all the bits and pieces, photos and so on. The craft group look like a lot of fun. And then you mentioned meeting Patty Hearst's husband. Oh, my goodness! You so need to write your memoirs!

How beautiful. I love making cards and stuff, so this was so lovely. The bookmarks are especially cute. Thanks.

I often think it would be fun to write a book like Lucy Mangan's Bookworm. Have you read that?

On Saturday, I ran into Sasha again, walking around with her Yale counterpart: