The Grey King: The Dark is Rising by Susan Cooper 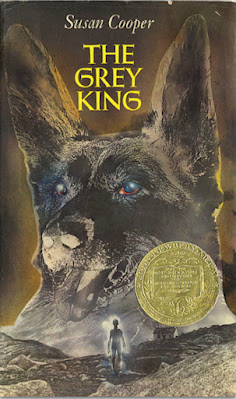 Description: After an unexpectedly severe illness, Will Stanton is sent to Wales to recover with his uncle's family. Approaching their farm, Will unexpectedly feels a sense of menace coming from the mountains and learns there is a legend that the Grey King dwells there. Illness has caused Will to forget the prophecy he was given but this prompts his memory to return and he starts remembering key parts of the verse:

On the day of the dead, when the year too dies,
Must the youngest open the oldest hills
Through the door of the birds, where the breeze breaks.
There fire shall fly from the raven boy,
And the silver eyes that see the wind,
And the Light shall have the harp of gold.
By the pleasant lake the Sleepers lie,
On Cadfan’s Way where the kestrels call
Though grim from the Grey King shadows fall,
Yet singing the golden harp shall guide
To break their sleep and bid them ride.

Since learning he was an Old One, responsible for fighting the forces of Darkness, he has known dangerous conflict would come. Now, with help from the mysterious boy Bran and his silver-eyed dog Cafall, Will must find the gold harp and withstand the Grey King so he can wake the Sleepers.

My Impression: In case the search for the grail earlier in the series wasn’t clear enough, this series includes Arthurian tradition as well as other folklore and mythology (it is quite a change from the local legend prominent in Greenwitch). According to legend, King Arthur is sleeping with his trusted men and sword Excalibur and will wake when his country needs him. And it seems that time is coming fast, Brexit notwithstanding! Will is primarily on his own in this book, with Merriman, his Merlin figure, not far away but not immediately helpful. Merriman prepared Will for this quest to find the gold harp and vanquish evil when they read the Book of Gramarye in The Dark is Rising. I am not sure exactly what was in it other than useful information for riddles but Will has become the most impressive and capable preteen in Britain. Some of the men in Wales recognize that he behaves more like an adult than a child. He has been growing into his role as an Old One since we met him. 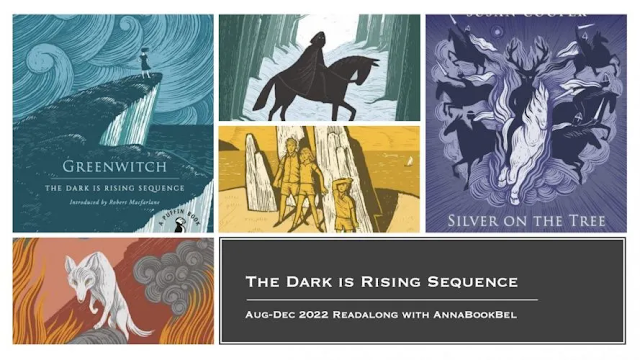 Will meets Bran and his dog Cafall, both mentioned in the verse, and learns that Merriman told Bran to help him. Bran is a foundling left with Owen Davies by Gwen, a distraught young woman who disappeared almost immediately. Because Owen loved her on sight (a dangerous activity), he brought the child up as his own; the upbringing has been strict but affectionate. Bran is an albino which has made him a target for bullies and he is wary of Will’s powers. Will learns that Bran is really the son of the sorrowful lord they encounter inside the mountain and although no one will say his name, it is obviously King Arthur, although it takes Will longer to figure out Arthur is Bran’s father. Once Will obtains the gold harp from Arthur, he still has to wake the six Sleepers to fulfill the quest. He needs Bran’s help but Bran has troubles of his own and wants to be left alone.
One of my favorite parts of this book is the riddle scene where Will and Bran both have to answer obscure questions based on Welsh mythology.  If they get one question wrong, they will not get the gold harp they need.  Interestingly, one of the three lords is from the Dark although he is not the Grey King (note to self: anyone who hisses is not a good guy), one is King Arthur, and the third is Merriman.  Merriman visited Bran before the book begins and told him enough about Will's quest to persuade him to assist.  Like Frodo, Will is expected to find other helpers as he begins this quest to unravel the verses.
Farah Mendlesohn pointed out to me recently, in another context, the pressures on orphans vs foundlings are not the same: a foundling may have different abandonment issues and face judgment from society about his mother and why she gave him up.  Bran told Will that his mother died because he wanted to believe that is why she never returned, not that she left him after two days.  Bran does learn in this book that Owen is not his birth father but his knowledge of his lineage is still to come, although the reader now knows.

Caradog Prichard is a local farmer whose mind has been taken over by the Grey King. The Grey King controls milgwn, large and dangerous foxes only Will and Bran can see, which can disguise themselves to look like Bran’s dog or the dog of John Rowlands, who works on the Stanton farm. Prichard believes both dogs are killing his sheep and no one can prove it is untrue. Prichard also once attacked Bran’s mother so his evil nature was a suitable receptacle for the Grey King. Like Hawkin in The Dark is Rising, he cannot survive being possessed by the Dark. Caradog is basically an evil stand-in until the Grey King is ready to challenge Will directly.

In some ways, this is the strongest book in the series and it won the Newbery Award in 1976. Will impressed the Drews in Greenwitch and here he impresses adults who sense his power. However, he needs help to vanquish the Dark. In the fifth book, he will be rejoined by the Drews and Bran also, if I recall correctly. AnnaBookBel’s group read of The Dark is Rising sequence will conclude in January. 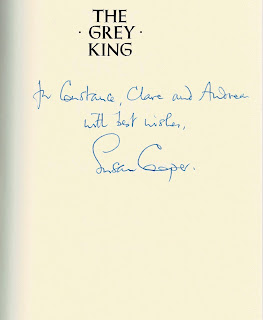 Source: Personal, autographed copy. I guess my brother was not reading fantasy then (he’s reading Willa Cather now) but it was kind of mean to leave him out of the autograph!
Posted by CLM

So this was as far as I got with the series, up to Greenwitch I mean. I've not read this and your excellent review makes me realise I must. And it might be the perfect time of year for it too!

One more month of the readalong and I'll really miss it. I've enjoyed exploring each of these books with the group, and I see different facets through each person's posts.

Thank you so much for joining in the readalong and writing such a great review. I enjoyed Will so much more in this book, and it's more grown up feel. The intertextuality was wonderful to mull over.

I have always loved Susan Cooper's novels. Have you read The Boggart? That's a real treat--a family goes to reclaim their ancestral castle in Scotland and fantasy abounds, and yes, a novel for those 10-16 years, but I loved it as an adult. Loved The Dark is Rising! And I am not a reader of fantasy, usually. She is a truly accomplished writer. Come to think of it, I would enjoy reading everything she's written. Must look that up!

I assume I have read the Boggart but I don't really remember it. I have a copy somewhere. However, the next Cooper will be the final book in the series or the Shakespearean time travel.

Lory and Annabel, it has been fun to read this series with a group. I don't think I have ever done a complete reread before as until a year or so ago I did not own all five. I assume I always liked Will but I especially like him now! I wonder what should be next? Lloyd Alexander?

Cath, you will need to go back to the beginning of the series, I think. You will enjoy all the various settings.

When I first got this out if the library in the 1970s I don't recall getting very far with it – I guess I wasn't ready for it then, but I've more than made up for it now! It's such a dark, intense novel rooted in the landscape it's set in, and having visited the area a couple or so times now I appreciate the instalment even more than if I'd struggled through it fifty years ago.

Anyway, I enjoyed your discussion of it in this review, and am looking forward to your take on the next. And how lovely to have a signed copy from the author!

A lovely review, I really can't wait to read these in a splurge between Christmas and the New Year!