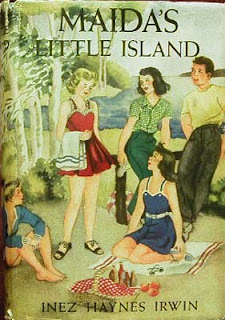 On Thursday, Carolynne Lathrop (visiting Betsy-Tacy listren from Iowa, who is also a Maida fan), my mother and I set out to visit Spectacle Island, one of the Boston Harbor Islands, the setting for Maida's Little Island (1939). The island has been expensively restored after 6 million tons of dirt and gravel from Boston's Big Dig were dumped on it, creating an 80 foot mound of trash. A friendly and helpful park ranger drove us to the island's north drumlin, the highest point in Boston's Harbor, where we were 157 feet above sea level (I had not worn appropriate shoes and was delighted to have scored us a ride in the airport-like people mover since the day was hot and the road to the top was long and dusty).
This vista towered over neighboring islands and boasted a view spanning Boston's skyline and the 40 miles between Salem to the north and the Blue Hills Reservation to the south. The island itself was named by early colonists because of its resemblance to a pair of eyeglass spectacles shaped by two hills, with what is called a bridge in the middle. See map.

Maida was the millionaire daughter of Jerome "Buffalo" Westabrook, who coaxed her back to health and animation in Maida's Little Shop, set in Charleston, MA, and published in 1909 by Inez Haynes Irwin, an early graduate of Radcliffe College, my alma mater. After an operation, on a chance visit to Charlestown, MA, Maida and her father visit a little neighborhood shop, and Maida is enchanted, wishing that she, too, could tend a shop just like this one. Delighted to see Maida take an interest in something, her father buys the shop and arranges for Maida to live there and run it with the help of Granny Flynn, an Irish nanny-cum-chaperone. Mr. Westabrook makes two conditions: that Maida must make the shop pay and she must not reveal her true identity. Maida finds happiness and health by making friends among the neighborhood children and is restored to health by living an ordinary life, tending her little shop.
Later in the series, Maida and her friends, now practically adopted by Buffalo Westabrook, are taken to visit what Inez persistently refers to as Spectacles (plural) Island. "Great is the joy of the Big Eight when Maida's father takes them for a vacation to Spectacles, where exploring the island provides endless fun and many thrilling adventures." My mother wondered why the author chose this island for the setting when even in her day it was being used as a landfill but perhaps Inez chose it simply for its appearance. Buffalo Westabrook says his deed to the island is dated 1703, and he refers to the Southern and Northern "eyes" instead of "drumlins" but it is unmistakeably the same island we visited. During their four-day camping trip, Maida and her friends not only discover (and capture) a dangerous anaconda and also find buried treasure on the island.

As has often been told, my mother collected all the Maida books growing up. After she left for college, my grandmother gave away all her books, including the Maidas (along with a complete set of the 1954 Giants team baseball cards).* Once my mother introduced me to the books, I too became a Maida fan. It took us years to reconstruct the collection, and admittedly the first book is by far the best. Still, if one is a completist, as is yours truly, then one cannot simply own just the first book in a series of this importance.

* My grandmother always argues if she had known these things were important to my mother she would not have discarded them.  My mother says these cards would have paid for my Harvard-Radcliffe education if she could have brought herself to part with them.