What was your favorite book as a child?

The New York Times asked today what was *your* favorite book when you were a child and it is interesting to see all the comments. Many mentioned favorites of mine such as The Phantom Tollbooth, Madeleine L'Engle's A Wrinkle in Time, Lloyd Alexander's Prydain series, Narnia, The Lord of the Rings but I was also interested to see an early comment listed the Malory Towers and St. Clare's books of Enid Blyton, which very much influenced my early (and lasting) love of English school stories. Many of the books I loved as a child were books that were already published so I tried to remember books that my sister and I eagerly anticipated coming out in the same way we now await HP VII tomorrow night. Her daughters will never forget the week leading up to midnight 7/21, and Alexa was frantically finishing HPVI as late as Tuesday. She wasn't even born when the first book came out! 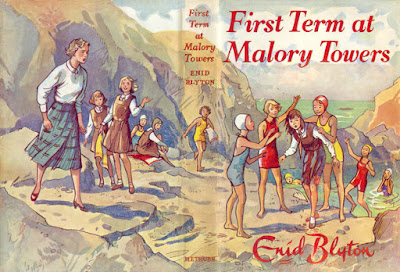 Janet Lambert's books about the Parrish and Jordon families and Lenora Mattingly Weber's books about Beany Malone and Katie Rose Belford are definitely among my favorites but I caught both authors, so to speak, in their last years when the quality of their writing was not as strong so I was seeking early work, rather than waiting for new releases. One author I do recall eagerly anticipating new books from was Ruth Arthur - in particular, The Autumn People, which has some parallels to Mabel Esther Allan's Time to Go Back. In addition, Ruth Arthur was published in the US by Atheneum, then under the auspices of Margaret K. McElderry. Her imprimatur was almost a guarantee that I would like a book in those days, from Susan Cooper's Over Sea Under Stone to Nancy Bond, L. M. Boston and Elizabeth Enright (and more recently, Hilary McKay's books). I am sorry I have never met her because not only am I a huge admirer of her work in publishing but she was married to one of my grandfather's closest friends, Storer Lunt (former president of WW Norton).

If you asked me which authors I most eagerly anticipate now, at the top of the list might be my request for another Damar book from Robin McKinley, and she is clearly tired of that question. I also look forward to new books from Diana Norman, Katie Fforde, Suzanne Brockmann, and Shannon Hale, to name a few. My sister Clare probably awaits Michael Connelly's books with equal enthusiasm.
Posted by CLM