I thought few people remember Walden’s teen novels these days so I was surprised and pleased when I read last fall on Kristin Cashore’s blog that she had been nominated for the Assembly on Literature for Adolescents’ (“ALAN”) inaugural Amelia Elizabeth Walden Award.

I read every one of Walden’s 40+ books I could find in the 70s and enjoyed them, although admittedly some were very formulaic. They are quite dated now and at times seem sexist because while her message ostensibly is that young women can do anything, her male characters often belittle them and say that until they learn how to be womanly women they cannot truly be successful/know themselves/succeed, etc. Despite this, which annoyed me even as a teen, I liked her books a lot. She wrote several different genres: spy novels, sport themes (of these my favorite is My Sister Mike), drama theme (I enjoyed a trilogy about a young woman named Miranda, although the man she ends up with was one of the most condescending creatures ever, her director/producer), and a few general (Waverly, about a girl who leaves her beloved family ranch to attend the all women's college her deceased mother had loved so much). Her characters love the outdoors and, long before Title IX, enjoyed sports ranging from skiing, basketball, tennis, horseback riding, softball, swimming, field hockey, and scuba diving.
Walden was born in New York City in 1909, and attended Norwalk High School in Connecticut, where she later taught English and Drama. She also attended Danbury State College, Columbia University, and the American Academy for Dramatic Arts. Her first writing was for local theatre groups in Norwalk. She described herself as a “reluctant writer” in More Junior Authors (1963). She wrote that her writing was inspired by “1) the urgency of things within me that needed to be said; 2) the insistence of persons surrounding me who have told me I must write.” Her husband and friends encouraged her to write, and she wrote her first book as “a good story and was surprised upon finishing it to learn that I had written a book slanted toward the young adult market.” Her first book, Gateway, was published in 1946 and her last book, Heartbreak Tennis, in 1977. Some fall into the genre of Malt Shop books. I wondered whose idea it was to honor this author, and then read she had endowed the prize herself! Well, it’s like buying one’s own brass bowl – if you want something, sometimes you have to plan it yourself. Amelia wanted the annual $5,000 prize to go to a book that exemplified her own positive approach to life, requesting that submitted titles should: 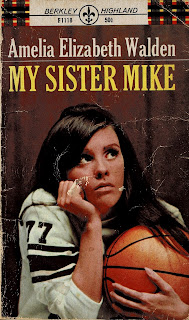 •treat teen readers as capable and thoughtful young people
•offer hope and optimism, even when describing difficult circumstances
•have a credible and appropriate resolution
•portray characters involved in shaping their lives in a positive way, even as they struggle with the harsh realities of life

In 2009, the first winner was Steve Kluger for My Most Excellent Year: A Novel of Love, Mary Poppins, and Fenway Park (I remember selling his Last Days of Summer to B&N in 1998). I wish I could be on the Award Committee. Perhaps ALAN needs a lawyer and I could barter my services. . . In the meantime, I recently found a duplicate copy of My Sister Mike, which I sent to someone who was willing to try this vintage yet trailblazing author. It's one of those Berkley Highland paperbacks with the plaid corners I like so much.
Posted by CLM

I'll take it, if someone else you like better doesn't also want it. ; )

I wish I could find her books. I loved the drama books because they showed how interesting it was to try and understand the characters in the play, in the way that real actors do.

I loved her books and I wish I could find some. I especially liked the drama books because they showed the challenge of trying to understand the character that an actor plays, the way real actors and directors do.