Claire has arrived at Castle Leoch, the ancestral home of the MacKenzies (not that anyone has bothered to tell her where they were going or explain to her that her primary captor, Dougal, is the brother of the laird, Colum).   As Dougal’s group arrives, the men scatter, leaving Claire gazing around the castle courtyard which she recognizes from her visit with Frank, a few days earlier, although in the 20th century, it is a ruin.  It is beautiful and will doubtless attract American visitors now.

A plump and jolly lady, clearly the housekeeper, greets the returning warriors, insults one of the louts affectionately, and is perplexed by Claire’s unexpected and disreputable appearance.  Jamie introduces Claire to Mistress FitzGibbons who warms to Claire when she realizes Claire is a healer.  “Are you a Beaton?” she asks, referring to a clan known for such skills.   Claire agrees warily and follows Mrs. Fitz and Jamie into the castle and is given what passes for first aid supplies in the 18th century (Mrs. Fitz also promises to find something that is a “bit more” appropriate for Claire to wear, leaving no doubt of her opinion of the skimpy white dress).  Claire and Jamie are left most unsuitably without a chaperone (Claire probably has no reputation left anyway after several nights with Dougal and his merry men) but her mind is on other things – she is having flashbacks to her earlier visit when she and Roger wondered what this dark dungeon-like room was used for (and came up with a diversion not in the book). 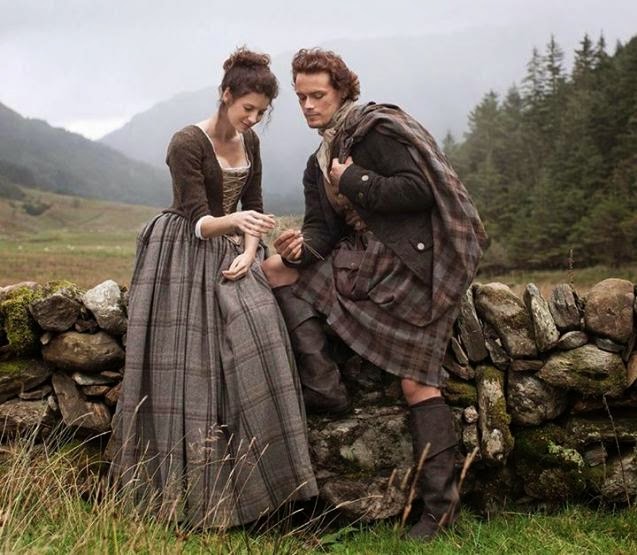 When Claire removes Jamie’s tattered shirt to clean his shoulder wound she sees terrible scars on his back and is horrified.  Jamie explains that the Redcoats flogged him twice, and reveals his feud with Captain Randall which began four years ago when the Redcoats raided his family’s farm.  Jamie returned from the fields to find the English soldiers molesting his sister Jenny and when he tried to come to her rescue, Captain “Black Jack” Randall sadistically had Jamie beaten as Jenny watched.  To save Jamie’s life, Jenny was forced to submit to Randall’s sexual assault, while Jamie was arrested and taken to Fort William, where two floggings took place.   Eventually he was rescued but an English soldier was killed during the escape, and Jamie has been charged with obstruction and murder and remains a fugitive from English justice. (Jamie alternates between looking like a dangerous warrior and a choirboy).

Jamie appreciates Claire’s tender touch on his sore shoulder and says her husband is a lucky man.  Claire ignores the flirtatious comment and starts worrying about Frank again, and we see a flash forward to Frank and his genealogy buddy, Reverend Wakefield, finding her abandoned car and searching for her near the stones.   Claire begins to cry and tells Jamie her husband is dead (“Hello, I’m single!”).  He enfolds her in his arms and it is hard to imagine caring about boring Frank (although he had a certain Agatha Christie/Patricia Wentworth mid-20th century hero charm) when Jamie is right there.  The chemistry between Claire andJamie was so strong in Episode One that Starz renewed Outlander for a second season before this episode even aired!   Claire realizes this embrace is getting way too intense and pulls away, much to the disappointment of the audience and probably Jamie, and Jamie gazes at her seriously, uttering the swoonworthy lines we have seen in the trailer but can’t get enough of: “You need not be scairt of me.  Nor of anyone else here, so long as I’m with thee.”   He warns her that being English is a dangerous but Claire is so tired she just falls asleep without absorbing his warning.  Jamie departs with his shirt tucked under an arm (readers know Jamie is sensitive about the scars on his back so would have dressed before leaving but Starz viewers doubtless want to see more of him shirtless).

The next day Mrs. Fitz wakes Claire up and helps her get dressed in 18th century clothes (she is shocked by Claire’s 20th century underwear) and put her hair up elegantly.   Claire looks lovely but very different from her post WWII appearance (in which indulgent smiles at Frank were her most noticeable accessory) when she is brought to meet the laird.  She looks desperately around his study, which is full of books and looks much more civilized than the rest of the castle.  When she sees a letter dated 1743, she is relieved to know the date and tries to remember what was happening in Scotland at that time, asking herself who the king is.   Remembering Frank (who worked in Intelligence during the War) had once told her that the most effective spies stick to the truth as much as possible, she tells Colum she is a widow from Oxfordshire who was attacked first by bandits, and then by Captain Randall.   Colum is skeptical and asks why an English officer would attempt rape for no good reason.  “Is there ever a good reason for rape?” Claire asks coldly (and somewhat anachronistically), and Colum is surprised and apologizes.   He agrees to help her find transport back to Inverness in five days.  Cheered by the thought of finding her way back to the stones, Claire thanks Colum and retreats to a nearby turret where she gazes down at the courtyard and she sees Dougal playing with a red-headed child.

At dinner in the Great Hall of the castle, Claire makes a late entrance and wonders nervously where to sit.  Dougal escorts her to the head table where she is given a seat of honor next to Colum and is introduced to his wife, Letitia.  Colum fills Claire’s cup frequently with wine and quizzes her about the French relatives she pretended she was going to visit, and her answers are unconvincing.   When the red-headed boy, Hamish, approaches the table, Claire introduces herself and says she saw him playing in the courtyard with his father. From the icy silence, she realizes she made a mistake – it turns out Colum is the boy’s father, not Dougal.

Seeking out her only friend, Claire goes to the stables to visit Jamie, ostensibly to change his bandages (Mrs. Fitz isn’t convinced by this excuse but provides a picnic lunch).  Claire finds him breaking a horse (both looking quite attractive) and over lunch he tells her more about his escape from Fort William.  Claire is touched but surprised when Jamie reveals there’s a price on his head, and he tells her he trusts her with this secret.   He also explains that Dougal and Colum are his uncles.  Dour old Alec tells Jamie to get back to work, so Claire departs, joking that Jamie should avoid getting flogged or stabbed for a whole day, if possible.  On her way back to the castle, Claire realizes she is being followed by one of Dougal’s men who laughs at her annoyance.  It is a shame they are so hirsute and unwashed it is hard to tell them apart but I think it is Rupert.  He isn’t trying to harass her is guarding her for Dougal.   When confronted, Dougal tells Claire he suspects she is an English spy so is having her closely watched.

Claire is determined not to arouse any more suspicion before she can leave for Inverness so helps out Mrs. Fitz in the kitchen and explores the castle grounds.   Out picking mushrooms, she is befriended by Geillis Duncan, an attractive young woman from the village who is even more expert on herbs than Claire, whose hobby it is.  Geillis’ idea of lively conversation is to talk about which plants are poisonous and announce she is a witch but she sits next to Claire at the banquet that night and provides lots of useful gossip in an undertone in her role as new BFF. Claire has guessed that Colum suffers from Toulouse-Lautrec syndrome, a bone structure disease.

Colum, as laird, is administering justice, and a young woman named Laoghaire is dragged before him by her irate father who wants her punished for loose behavior.  She is about to be beaten in public when Jamie, still wounded but gallant, offers to take her punishment.  Claire is appalled to see Jamie bashed about by his uncles’ henchman for this quixotic gesture, and it takes Dougal a long time to call a halt to the beating.  Geillis holds Claire back from interfering but tells her a discreet way to leave the hall so she can go repair Jamie yet again (and not for the last time, I promise you).  Claire is mystified by Jamie’s having subjected himself to such abuse when he barely knows the girl but he explains it would have humiliated Laoghaire but he will recover in a day or so.   Mrs. Fitz appears with some helpful remedies and explains that the blonde hussy is her granddaughter so she appreciates his gallantry.  Claire tells Jamie she is leaving on Saturday for Inverness and he seems sorry.  They gaze into each other’s eyes and say goodbye, using first names for the first time.   As Claire leaves Jamie, the blonde trollop is waiting for him (she already seems jealous of Claire).  I have always wondered how to pronounce her name – it sounds like L’heere or Leery.

Claire is about to leave for Inverness escorted by a tinker when she is summoned to speak with Colum. Dougal brings her through the dark rooms where she and Frank had sex days ago and Claire keeps seeing glimpses of Frank in the corners.  Colum tells her she is to stay at Castle Leoch as a healer and as his guest until he is satisfied that her secrets cannot harm his clan.  “You mean as your prisoner, don’t you?” Claire says bitterly.   “Only if you try to leave,” he responds, and Claire stares in despair into the darkness, wondering if she will ever return home as Episode 2 ends.

What is important about this episode:  Increasing sexual tension between Claire and Jamie; Jamie’s gallantry is established (plus the fact that he is always going to be recovering from some form of fight); Claire’s 20th century sensibility surprises 18th century men (not for the last time); Jamie’s uncles don’t mind seeing him get beat up; Laoghaire has her eye on Jamie; Claire adds to her herb knowledge with help from Mrs. Fitz and Geillis; the MacKenzie brothers are convinced Claire is a spy; Claire misses Frank and wants to get back to the stones in Inverness.