Woman with a Gun (Book Review 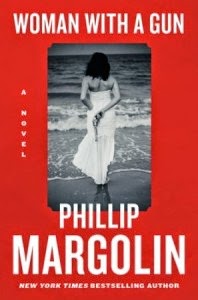 Plot: This is a story within a story inspired by an unusual photograph of a woman in wedding dress approaching the ocean, holding a gun.  Stacey Kim is working as a receptionist at a law firm in New York to pay the bills while she nurses literary ambitions:

"Stacey’s nonexistent social life and mind-numbing job would not have mattered if she was making progress on her novel, but she wasn’t . . . Each time Stacey stared at the blank page on her laptop she tried to rekindle the hope and excitement she had felt during her first days in New York, but all she felt was despair.
That was about to change."

Bored and frustrated, Stacey visits MOMA at lunch one day where she sees and is fascinated by this iconic photograph, learning that the subject, Megan Cahill, is suspected of killing her husband on their wedding night.  Stacey is convinced the photograph should be the basis of her novel, and impulsively quits her job and heads to the Oregon to interview as many of those involved in the investigation as possible, including the legal team and the photographer, Kathy Moran.

Audience:  Fans of suspense, thrillers.  I was trying to remember other books that have a photo as a focal point and temporarily cannot come up with any, although Robert Goddard’s Caught in the Light is about a photographer who becomes obsessed and Portraits in an Album is about a family photo album and its secrets.

What I liked: I had read and enjoyed some of Margolin’s more traditional legal thrillers about Dana Cutler, so was curious about this one.   After a slow start, I found it very unusual and entertaining.    I liked the character of Stacey and admired her determination to interview everyone involved in the original murder of Megan Cahill’s husband, and was pleased when she began to connect in a personal way with some of these individuals.   Margolin manages to pull all the storylines from the past and present together in a satisfying conclusion.

In another book of his I read recently, he mentioned having lost his wife.  I am glad he has kept writing and hope it has distracted him from his grief.

What I disliked: Some of the characters were so unpleasant I didn’t want to read about them, so I was on the fence until Stacey began to appeal to me.    While I think I prefer his more traditional thrillers, I admire an author willing to try something new.

This sounds like just the kind of book I would like--about writing, imaginative, and focused. There's a subgenre of books that are the backstory to a painting (Tracy Chevalier writes these), and extending it to photos seems like a logical extension. I tend to like these stories, with an object as the springboard.

I haven't read anything by Margolin, but I will definitely check this one out.

The photo IS very fascinating - I can understand why Stacey was so drawn to it and invested in finding out the truth.