The Black Cabinet, a mystery by Patricia Wentworth 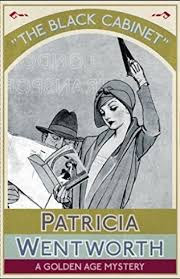 Plot: Poor but honest, not to mention lovely, Chloe Dane works for a dressmaker and tries to avoid the affluent friends from the world she was born in; she knows she can’t afford their amusements and won’t accept charity. However, when a distant relative summons her for a visit and shares a dangerous secret before dying, Chloe is plunged into a world of blackmail and strangers who pretend to be friends now that she is an heiress. Only Michael Foster, also down on his luck and forced to drive a car for a living, displays the steadfastness, humor, and honor that make him a worthy Wentworth hero, and he assists Chloe in escaping her ill-wishers.

The Black Cabinet is where Chloe’s unpleasant relative Mitchell Dane kept his blackmail materials. When he tells Chloe the combination to its lock and makes her his heir, he sets in motion a series of events that put his victims at risk – and Chloe - from men eager to profit from his nefarious activities.

Audience: Readers of English drawing room mysteries where, despite genuinely frightening moments, the villains exist to be outwitted and the heroines are plucky and usually do not wait to be rescued by a man -- although there usually is a man and a happy ending.

Mrs. Rowse looked severely at Chloe for a moment, and added, “If you was plain, it’ud be a lot easier.”
“I should so hate to be plain,” said Chloe with a beaming smile. “Dear Mrs. Rowse, do think of something. You see if I don’t get a job, I can’t pay you after this week – and I know you are much too kind-hearted to turn me out into the street.”
Mrs. Rowse snorted again. “You ought to go back to your friends, you ought,” she said. “I don’t hold with young gels running away and hiding. And what’s the use of your saying you’re not a young lady, when anyone can see the length of Hatchelbury Road in the dark that you are? If you was really a plain ordinary gel, why I suppose there’s a job you could have tomorrow. But you’re not, and you couldn’t do it.”
Chloe slipped off the table. “Mrs. Rowse, how frightfully exciting! What is it? Tell me at once. It’s no use saying I couldn’t do it because I’d do anything.”

My Impressions: This is one of the older Wentworth mysteries that were not available in paperback and few copies survived in the U.S., although as I read there were oddly familiar moments. I am thrilled that it is now available from Dean Street Press, and while it may not be one of her absolute best, it was an enjoyable read with some very funny moments, most supplied by Michael Foster.

Source: I asked the Boston Public Library to order several of the reprinted Wentworths and I am grateful to the librarian who ordered this and more.
Posted by CLM

I started collecting some of the books without Miss Silver, though I haven't come across this one yet. A couple have been quite melodramatic, and one reminded me very much of Heyer's Footsteps in the Dark (but without the comedy).