Before the Dawn (Book Review) 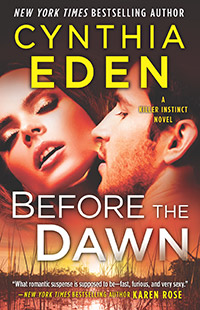 Plot: The Killer Instinct series from New York Times bestselling author Cynthia Eden continues as an FBI profiler tracks a case that resurrects ghosts from his past.

Ex-SEAL Tucker Frost knows that the world is full of evil. He saw it in the face of his own brother, Jason Frost, a cold, methodical, sadistic killer. A killer Tucker put down with his own hands in order to save Jason’s final victim—Dawn Alexander, the only girl who got away from the infamous “Iceman.”

It’s Tucker’s up close and personal experience with evil that’s made him perfect for Samantha Dark’s experimental profiling division in the FBI. Samantha wants agents who have personal ties with killers, who have unique insights into the minds of monsters. And when women start turning up murdered with the same MO used by the Iceman, Tucker is sent back to Louisiana to investigate.

The last person he expects to see is his ex-lover, Dawn. Seven years have passed since the night that Tucker faced down his brother…and since he last saw Dawn. But the dark need still burns just as hot between Tucker and Dawn. As they grapple with a desire that never died, they must also face the shared shadow from their pasts. Both Tucker and Dawn have the same question—has Jason Frost come back from the dead to hunt again? And this time, will he succeed in killing the victim who got away?

Audience: Fans of romantic suspense and of authors such as Linda Howard and Kay Hooper.

Social Media and Giveaway: You can follow Cynthia Eden on Facebook or Twitter.  You can also enter a raffle to win a gift card. a Rafflecopter giveaway


My Impressions: This was a fast paced and entertaining read, set in New Orleans, one of my favorite places. Although it was the second in the series, it worked as a standalone, but I enjoyed it enough to go back for the Eden’s earlier books. It sounds a little odd to say I like serial killer novels (I skip the gruesome parts, which makes books on CD in this genre a bit problematic) when what I actually like are the teams who solve the crimes. I also appreciate characters who have suffered and survived like Dawn, who faced a serial killer and rebuilt her life afterwards. She and Tucker are fairly predictable but the supporting cast provide the real dimension to this story. I look forward to reading more about Samantha Dark (although her name is a cliché a good editor should have discouraged!).

Source: I was provided a pre-publication copy of this book by the publisher for review purposes.  Thanks to TLC Book Tours for including me.  You can visit other stops on the tour by clicking below: