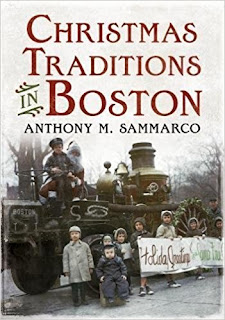 Description: This is a warm and delightful description of the celebration of Christmas in Boston from 17th century Puritan days to the present. Anthony Sammarco, a Boston native who spends all of his free time researching, writing, and speaking on iconic historical aspects of local history Is a delightful raconteur, both in person and through his books. He describes the restrictions on celebration in the Bay Colony’s early history, followed by the development of new traditions as Anglicans and Catholics emigrate to and settle in the Boston area.

I was particularly interested in Lydia Child, a writer and abolitionist known for having written “Over the River and Though the Woods to Grandmother’s House We Go.” While many readers may already know that Germans such as Prince Albert popularized the Christmas Tree in England and the United States, I did not know it was a German-American in Cambridge, Harvard professor Charles Follen, who had one of the first Christmas Trees in Boston 1830s, or that Prussian-born Louis Prang (1824-1909) introduced the Christmas card after settling in Boston and establishing a lithograph business (Prang is also known for supporting women artists). I do enjoy old fashioned Christmas cards! 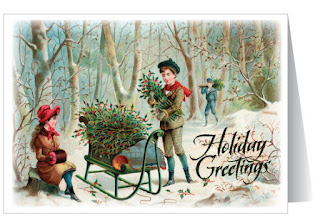 Reading these stories about Christmas traditions being inspired by Germans reminded me of Louisa May Alcott who may have known some of these individuals (not just the poor Hummel family). Anyone who ever read Little Women (spoiler alert) knows that moment of betrayal when the reader realizes (a) Amy March is marrying Laurie instead of Jo, and (b) that Jo gets stuck with dumpy Professor Bhaer. I went to my mother in horror who, although not yet a librarian, always knew everything. She explained to me that German immigrants and culture were very influential in 18th and 19th century America – Germans were the second largest immigrant group after the English - that they were intellectual and very influential as to the development of American culture, and that Jo March was attracted to Professor Bhaer’s intellect and kindness. That is, alas, not what your 9 or 10 year old wants to hear. It will be interesting to see if the new BBC/PBS series can manage to make him appealing.

Audience: Fans of Boston history and those who enjoy Christmas decorations and traditions. Those who enjoy this book should join the Lost Boston group on Facebook where Anthony leads discussions about historic Boston and iconic institutions of the past. He also shares his speaking schedule there and I recommend attending one of his events, if you are in the area.

Both the Boston Globe and Herald have covered the publication of this book, and you can see Anthony himself on youtube. 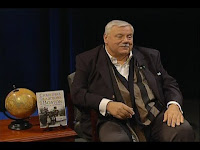 My Impressions: This book is a treasure trove of knowledge about locations and traditions in Boston which we sometimes take for granted, and is almost as much fun as hearing Anthony in person. I loved hearing about bell ringing on Beacon Hill and the sign on Boston Common near a crèche in 1963 that asked passersby to stop for a moment in memory of President Kennedy. The photos are plentiful and delightful: one of my favorites is of the infamous Mayor James Michael Curley, at home next to his Christmas tree, with his wife and son, all examining a drum. Their gifts are wrapped in plain white paper with ribbons (pre-scotch tape). My mother will like the part about Ted Marier who founded the Archdiocesan Choir School at St. Paul’s Church in Cambridge (growing up my sister and I were not fans of the incense but we always enjoyed the singing).

Source: I purchased a copy at an author event held at the beautiful Crane Library in Quincy, Massachusetts. I know Christmas is over but you don’t need to wait until next year to order this charming book.