Into the Night (Book Review) 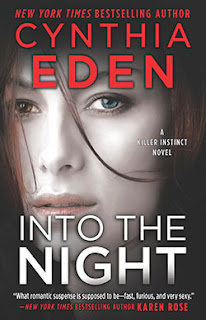 Sheltered in the shadows of the Smoky Mountains is the suspect who has summoned FBI agent Macey Night’s fears to the surface. Every day that the “Profiler,” a vigilante serial killer, escapes justice is another day she’s reminded of what it is to be a ruthless predator’s prey. Capturing him is a craving deeper than anything she’s felt in a long time. But Agent Bowen Murphy, equal parts sexy and volatile, seems hell-bent on changing that. Working together—needing, living and breathing each other—they’re entwined to distraction.

Bowen’s used to operating on impulse: act, don’t feel. Now Macey and the controlled terror behind her beautiful eyes have him rethinking everything, including his rule to never get close to a colleague. He’s willing to fight for a future with Macey, but the consequences of love could be deadly.

Audience: Fans of authors such as Suzanne Brockmann (I love her Troubleshooters series, although it is one of very few series in which I suggest not beginning with book 1), Tami Hoag, Lori Foster (see my review of Close Contact)

From Cynthia Eden: "My 'Killer Instinct' series . . .focuses on dark and sexy suspense–but suspense with a definite romance element. All of the books in this series feature characters who’ve had up-close and personal experiences with killers…the killers have been their friends, their lovers, their family members. Because of this closeness, the characters in my “Killer Instinct” books have a unique understanding when it comes to serial killers…and catching those predators."

My Impressions: I thought this was a much stronger installment in the series than the first book I read where the main character had been in denial most of his life that first his father and then his brother were serial killers. Macey is a former doctor who barely escaped the rogue surgeon at her hospital, a serial killer known as “The Doctor”, and she is now an FBI agent, part of the undoubtedly special team assembled by Samantha Dark (the most interesting member of the team). They are all profilers but with an unusual twist – each one has a very personal connection with a serial killer. This is creepy and makes chitchat about their pasts problematic but is supposed to help them with the behavioral analysis aspect of the job. While there is a prohibition on romantic entanglements among team members, that does not prevent Macey and her teammate Bowen from hooking up when they should really be getting sleep or concentrating on the many possible suspects . . . that is one of the challenges of fast-paced romantic suspense – making the romance plausible during a stressful period, and Eden handles it by showing the glimmers of attraction existed before Macey and Bowen are thrown together.

Part of Macey's appeal to serial killers is that she has two different colored eyes (heterochromia).  This condition, which is usually benign, does not run in families but fans of Anne of Green Gables will recall that it features as a major plot device in Anne's House of Dreams involving Leslie Ford's husband.