The Rose Garden by Susanna Kearsley
Do you ever save a book by a favorite author for just the right moment?   When I bought this, I was toiling miserably at a law firm and reading in short bursts on the subway.  The Rose Garden deserved uninterrupted attention and I finally I curled up with it on a cold fall day in 2018 and was swept away to Cornwall.  It starts slower than her other books, so be patient, but that made the eventual smoldering tension all the better.   I also recommend The Winter Sea, which was one of my favorite books of 2010.  Kearsley is the closest thing to Mary Stewart I have found. 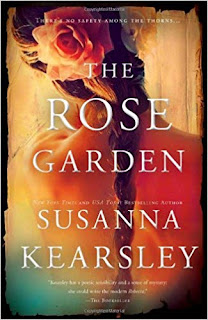 Message from Absalom by Anne Armstrong Thompson
After I finished The Rose Garden, I visited Kearsley’s website where she mentions that Message from Absalom was one of her favorites.   I immediately requested it from the library and reviewed it recently.   I recommend it to fans of romantic suspense, especially those who remember Helen MacInnes’ bestselling thrillers.

Star of the North by D.B. John
This thriller set partly in Korea was recommended by Nick Kristof.   I know we share a few favorite children’s books but had erroneously assumed he only reads serious nonfiction.  Intrigued, I sat down and read until 3 am.  Suspense, espionage, twins and a hint of romance!   I reviewed this earlier in the year and look forward to more from this author.

Eleanor Oliphant is Completely Fine * by Gail Honeyman
I was impressed by Honeyman’s ability to mix humor and pathos, while showing how transformative friendship is.  And, impressively, she didn’t conclude the book with the main characters falling into each other’s arms.

A Gentleman in Moscow by Amor Towles
After learning Count Rostov had been sentenced to spend the rest of his life in Moscow’s Metropol Hotel, I wondered how this plot could be sustained for a whole book!   But like a fantasy writer praised for world building, Towles creates a fascinating group of people who inhabit the hotel (as staff, guests, or passers through) and expand the Count’s world so that you forget he hasn’t been outside for years.

Best New (to Me) Series

Frieda Klein by Nicci French
Blue Monday, Tuesday’s Gone, Waiting for Wednesday, Thursday’s Child, The Day of the Dead (and three I haven’t read yet)
Frieda Klein is a psychotherapist who is surrounded by dark secrets: those of her clients as well as her own.   She gets drawn into various crimes, assists the police when needed (although they never believe her when they should), and always winds up in terrifying situations.   Don’t do what I did - read the final book in the series first!  This is not my style but I had agreed to review The Day of the Dead before I realized.  I then went back and read books 1-4 before I decided to take a break.   Maybe this will help me unlearn what I know is going to happen!

Jane Hawk by Dean Koontz
The Silent Corner, The Whispering Room, The Crooked Staircase (and two more I haven’t read yet)
When her husband inexplicably commits suicide, FBI agent Jane Hawk goes on the run to investigate his death in an effort to protect their son.   Jane is a very appealing heroine, with frankly unbelievable skills that help her outwit her enemies but they are only a step behind her.  I have never read Koontz before and was surprised to become addicted to this series!

War at Home by Cynthia Harrod-Eagles
Goodbye Piccadilly, Keep the Home Fires Burning (and three more I haven’t read yet) 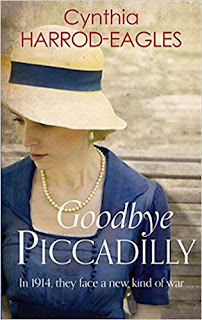 Best known for her Morland Dynasty (she has finally reached the 20th century and book 35), Harrod-Eagles is a skilled historical novelist and this series will appeal to Downton Abbey fans.  It is set just prior to WWI (like so many of my favorite books) and follows an upper middle class English family and its servants as war breaks out.  I always enjoy books about the home front, and I especially like the sisters in this series.

Pachinko by Min Jin Lee
Some may say the point of a book group is to drink wine with your friends (you have a problem with that?) but it is also to read and (one hopes) enjoy and then discuss books you wouldn’t have read on your own.  Pachinko was a fascinating, multi-generational saga about a Korean family.  Their lives were so hard and so lacking in hope that I can't say I enjoyed all the misery but the story was unpredictable, compelling, and well worth reading.

The Wright Brothers * by David McCullough
I was yearning for the days of heroes when it occurred to me to turn to David McCullough.  I hadn’t read up on Orville or Wilbur since the Childhood of Young Americans bio in the Ward School library but I had always been fascinated by the early days of aviation and I loved this biography.  What a bonus to have McCullough narrating!  It felt as if he were driving along in my car with me, and we chatted as we drove.

Kill the Boy Band * by Goldy Moldavsky
Recommended by my sister Clare, this was one of the funniest books I have read (listened to) in years.  The heroine and her friends are obsessed with a band called the Ruperts, and they will do anything to be near the objects of their desire.  One hilariously bad choice after another follows, and the book is full of memorable quotes such as:

“Maybe it was obsession, but it was also happiness; an escape from the suckiness of everyday life. And when you find something that makes you happy and giddy and excited every day, us fangirls know a truth that everyone else seems to have forgotten: you hold on to that joy tenaciously, for as long as you can.”

Campion Towers by John and Patricia Beatty
Set during the English Civil War, this young adult historical follows a spirited Massachusetts teen from Salem to her mother’s family in England where she is appalled by their adherence to the Royalist cause.   There is nothing more fun than a self-righteous teen who finds out everything she believed in was wrong and outsmarts her opponents.  I reviewed this earlier in the year.

One of Us is Lying * by Karen M. McManus
Five high school students get detention and one of them dies.   It turns out each of the survivors had a reason to wish Simon weren’t around.  Is one of them the killer?  I loved the way the author develops each character and how their friendships develop, and it was very well narrated. 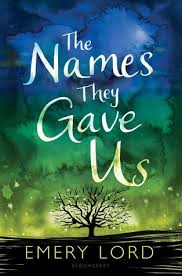 The Names They Gave Us by Emery Lord
Lucy is a preacher’s kid whose mother has cancer, challenging her belief in God.  Just as she needs friends the most, her boyfriend asks to pause their relationship, and she ends up as a counselor at a summer camp for troubled youth.  There aren’t many books about religious teens that would be appealing to the general reader but this is that book and is extremely well done.

Flambards by K. M. Peyton, illustrated by Victor Ambrus
In the first of this four book series, orphaned Christina is forced to go live with her Uncle Russell, and his sons, Mark and Will, at their home, Flambards, in the early 1900s. Mark and his father are obsessed with horses while Will is obsessed with machinery and aviation.  These books are just as delightful now as when I first read them at 11.  Stay turned - I reread these books because there is a new entry I have not had time to review.  And if you have not read them, please avoid spoilers! 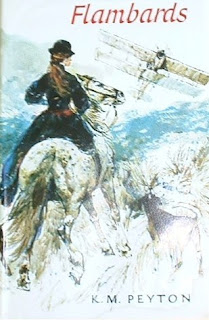 Is it a coincidence that several of my best reads of the year were audio books?  Did I savor them more because I enjoyed them slowly?  Or did I pick certain books to listen to that I expected to enjoy?   I haven't figured this out because I hadn't noticed it until I took a look at the year in total.
Posted by CLM

I'll finally be reading Eleanor Oliphant for book group later this year - looking forward to seeing if it lives up to everyone's rave reviews!

I’m on book two of the War at Home series and enjoying it.