Life After Life by Kate Atkinson

Publication: Hardcover, 2014
Genre: Historical Fiction
TBR Challenge:  This is the fourth book I have read in my self-selected 2019 Challenge, created by Roof Beam Reader. 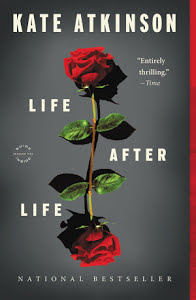 Plot: Born in 1910, Ursula Todd is the third child in an English family who experiences every scenario possible in the first half of the 20th century, with a twist.   Ursula is doomed to live her life again and again, each version ending in unexpected death through a variety of sometimes (but not always) avoidable scenarios.   For example, in one episode, an obnoxious friend of her brother’s kisses her on her 16th birthday, leading to all sorts of disaster, including spousal abuse.  In other lives, Ursula sometimes has a strange sense of déjà vu, so the next time this guy tries to manhandle her she pushes back, thus avoiding that particular fate but, of course, creating another.  The entire book is about fate and how it is unavoidable in one form or another, all unpredictable.

My Impressions: I really Atkinson’s Jackson Brodie books but found Life After Life somewhat disappointing, although it was acclaimed when published and I have been saving it for the right moment.   It contains all of Atkinson’s quirky understated humor and in-depth observation of people but Ursula spends so much time dying and starting over again that she did not seem very well developed as a character.   I enjoyed it but not as much as I had hoped. 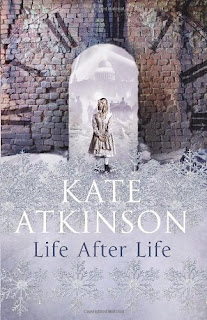 The narrative carries the reader along so quickly there isn’t time to wonder what is going to happen next or sometimes to recall exactly what she should do differently to avoid dying - although it is annoying, every time one gets caught up in the story, to have it suddenly come to a violent stop, which I suppose is part of Atkinson’s goal – the other part being that if you avoid one fate, the others may be worse.

Unlike Groundhog Day, there is no consistent learning curve, although Ursula’s propensity to occasionally anticipate bad things that happened in previous versions of her life and act upon it is, of course, baffling and unnerving to her mother, who drags her to a psychiatrist in an era when this was a stigma.   I suppose Ursula’s seeming precognition is why her mother dislikes her but that is unclear; the mother goes from charming to waspish without much explanation. I did like the relationship between Ursula and her sister Pamela, but overall I prefer Jackson Brodie.  I also prefer the English cover (above right) which shows the snow, which I forgot to mention, is always falling when Ursula is born.

Off the Blog: Today is the long-planned celebration at my library which is scheduled to close for a much needed $10.2 million renovation, but the Friends of the Library just learned it won’t actually shut until October.   Oh well, we’ve written speeches and solicited raffle prizes and ordered food (and rescheduled hair cut) so the show must go on! 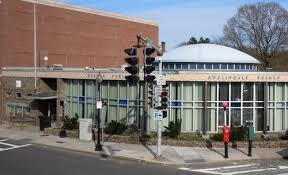