The Crystal Snowstorm by Meriol Trevor 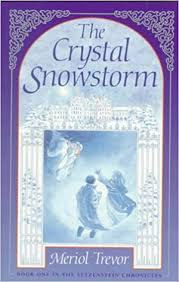 About the Author: Meriol Trevor (1919–2000), who graduated from St. Hugh’s College, Oxford in 1942, was a prominent 20th-century Catholic writer of adult and children’s fiction, having converted as an adult. She is best known for an award-winning biography of Cardinal Newman. As a child, she and her best friend created imaginary islands with complicated royal genealogies, which later inspired the Letzenstein Chronicles, although this series was not published until Trevor was in her 70s. Like C.S. Lewis, she used fantasy to show the values of her faith and religion. Scott, I see she is on your list, so I will be interested to see what you think of her adult work (when you get there).TBR Challenge: This is the sixth of twelve books that are part of my 2019 TBR Challenge, inspired by Roof Beam Reader, who encouraged me to look at books on my shelves I had purchased but not yet read.

Plot: In 1847, when young Catherine Ayre is summoned from her quiet life in England to meet her grandfather, the Grand Duke of Letzenstein, a small country near Germany, she does not know what to expect. Her mother was Princess Teresa, the Grand Duke’s only daughter, who eloped with a British officer and was disowned. The young couple went to serve in India, where Catherine was born, but they died of cholera (like the Lennoxes) and Catherine was brought up in Kent by a great aunt. Now the Grand Duke believes his son and rightful heir Constant has been encouraging democracy, which is antithetical to his rule, and is considering making 13-year-old Catherine his heir instead. This plunges Catherine into a maze of political unrest in a country where she has to figure out who are friends and who are enemies, and navigate accordingly.

My Impressions: This is a delightful Ruritanian adventure story with lots of lively characters. Catherine is an intrepid orphan, and while she seems a little passive at first, that is due to her sheltered upbringing. Soon she quietly musters her wits, makes friends, tries to use her inadequate French (the language of the Letzenstein court is French although the locals speak a German-based dialect), begins to understand her Uncle Constant’s support of liberté and égalité, and develops enough discernment to accurately assess the true nature and trustworthiness of her new acquaintances.

Constant has been living in Canada, which gave him a taste for wide open spaces and egalitarian government, but loves Letzenstein so much he returned, despite knowing his father resents and might even imprison him. Constant is kindhearted, and the only member of her new family who remembers Catherine’s birthday: he gives her a small crystal snow globe which has a small castle inside and at once becomes her favorite possession. Catherine lacks political knowledge but gradually realizes that her grandfather’s autocratic rule is passé and that Constant’s concern for the needs of the duchy’s inhabitants reveals a true leader.

Noblesse oblige is also a theme of A Coronet for Cathie, another novel with a teen heroine I read recently. There are some similarities, including the orphaned heroines’ name, the fact that they learn unexpectedly they are part of wealthy families, and their need to mature in order to handle the responsibilities of inheritance or blood. Cathie inherits a vast estate that is probably larger than Letzenstein in size but she is not in danger like Catherine and her friends. Unlike Cathie, Catherine is not the actual heir and does not want to be; however, she learns to love her new uncle and learns more from Constant than her grandfather about the obligations of a “modern” monarch. On Epiphany, Catherine attends a special ceremony in the cathedral for Letzenstein’s Knights of the Order. Constant has told her how much this means to him:


“It was founded when knights still fought, and I suppose it doesn’t mean to people nowadays what it once did. Yet it remains a way of dedicating our lives and our work to God, and it recalls to us the ideal of faithful service, rather than the privileges of power.”

Witnessing the dedication of those participating in this ceremony is an important part of Catherine’s assumption of her heritage.
Off the Blog: This week I attended Six the Musical, which was amazing. It is about Henry VIII’s six wives, told as a singing contest from the perspective of the wives. Some know that my love of history resulted from seeing the Six Wives of Henry VIII on PBS as a child, so I was a little apprehensive but I wholeheartedly recommend it.

Source: Personal copy. I don’t know why I waited so long to read this book.  I would have enjoyed it even more at 10 but it was fun to read as an adult and I am glad to learn it is the first of a four-book series. I have already requested the second book from ILL.
Posted by CLM

You are tantalizing me with books I will probably never be able to find ... this would have been candy for me as a kid! will look forward to hearing more about the rest of the series, anyway.

But you'll be able to visit these Balkan countries in real life, which is just as much fun!