Those Who Save Us by Jenna Blum

Title: Those Who Save Us
Author: Jenna Blum 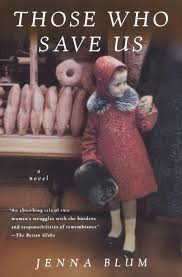 This is the seventh of twelve books that are part of my 2019 TBR Challenge, inspired by Roof Beam Reader, to prioritize some of my unread books.

Plot: In this dual time frame novel, the author moves back and forth from 1993 Minnesota where Trudy Swenson is a tenured professor of German History, who just lost her stepfather, and World War II Germany where Trudy’s mother, lovely Anna Brandt, grew up in an atmosphere of fear and repression, forced to desperate measures to stay alive and protect her small daughter.  Trudy has always had difficulty communicating with her mother, who refuses to discuss her life in Germany, and in midlife Trudy becomes involved in an oral history Holocaust project, hoping that by investigating the past she may be able to reveal some of her mother’s secrets.

My Impressions: I am a big fan of books set during World War II, and this is a dark but compelling story with an unusual depiction of women in war-torn Germany.  Anna grows up in a traditional German home, with a father who yearns to be accepted by the Nazis, and would have bartered her for a little prestige if she had not run away.   She is a tragic character: a motherless teen yearning for affection, who becomes involved with someone very unsuitable.  Although she cares about him, his depth of affection is unclear as he is even more alone than she is, needs her but is very rough with her.   Later, she is forced to be the mistress of a Nazi officer for years.  It is no wonder she has a hard time coping with the intimacies of married life later on in Minnesota, not to mention establishing a relationship with the daughter who has dim recollections of the degradation of their life in Weimar.  Anna is so haunted by the past it seems as if she has spent her married life doing nothing but cleaning her home obsessively.


I liked the sections set in Weimar better than those set in Minnesota, although both were extremely readable.   It not hard to admire Anna, who is spirited and determined to save her child.   However, Trudy was not a very appealing character, although I was initially sympathetic to her desire to untangle the mysteries of her past.  Ultimately, I changed my mind and decided that Anna had gone through horrors Trudy could not comprehend, even after interviewing Holocaust survivors, and deserved her privacy.  I got annoyed at Trudy for being so needy, especially when she threw herself into a very implausible relationship.

The title refers to the devastating effect of memory; in particular, Anna’s ability to survive but not to forget or move past the individuals who shaped her life.

Off the Blog: Last night I attended a Forum at the Kennedy School of Government, featuring Clark Kellogg of CBS Sports and co-hosted by the Harvard Men’s and Women’s Basketball teams entitled “The Growing Empowerment and Activism of the Modern Athlete.”  It was entertaining to see Kellogg in real life and he discussed the role that race, gender, and socioeconomic identity play in sports, as well as his commitment to give back to the community, although stressed that it is a personal choice he does not impose on others.  One of the students asked pointedly about how to handle activism without repercussions that damage one’s career.  Kellogg knew there was no real answer except to say people can only do what they feel able to do or to risk doing.

Source: Personal copy.  I bought this book at the Brookline Booksmith in 2015 at an event where Jenna Blum was interviewing author Sarah McCoy.  It took me a while to get to it but it was a very good, if harrowing, read!