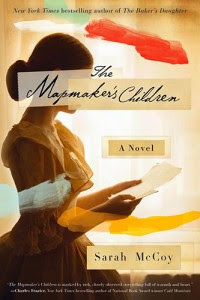 Plot: When Sarah Brown, daughter of abolitionist John Brown, realizes that her artistic talents may be able to help save the lives of slaves fleeing north, she becomes one of the Underground Railroad’s leading mapmakers, taking her cues from the slave code quilts and hiding her maps within her paintings. She boldly embraces this calling after being told the shocking news that she can’t bear children, but as the country steers toward bloody civil war, Sarah faces difficult sacrifices that could put all she loves in peril.

Eden, a modern woman desperate to conceive a child with her husband, moves to an old house in the suburbs and discovers a porcelain head hidden in the root cellar—the remains of an Underground Railroad doll with an extraordinary past of secret messages, danger and deliverance.

Ingeniously plotted to a riveting end, Sarah and Eden’s woven lives connect the past to the present, forcing each of them to define courage, family, love, and legacy in a new way.

Audience: Fans of historical fiction; those interested in the Civil War and/or strong heroines

What I liked: The Mapmaker’s Children was one of my favorite books of 2015 and should be included on your summer reading or future book group list. I was fascinated by the description when I first read about it, months before it came out, and I immediately asked if I could participate on the blog tour. I particularly enjoy books that move from the present to the past, especially when written by a skillful author such as this one, and which feature a strong heroine. McCoy moves effortlessly from prevent day West Virginia where Eden, a troubled woman, is trying to make a new start in a quirky and appealing community, to one of the most troubled times imaginable, and a heroine who moves from New York to West Virginia to Massachusetts to California in a time where most women stayed within a few miles of where they were born. Her description of John Brown’s surviving family and how they coped with the notoriety that was his legacy to them kept me reading late into the night. I loved the character of his daughter, Sarah – her ingenuity and courage and dedication to her father’s dream. I almost resented whenever we left her story for Eden’s modern-day problems and unreasonable quarrels. Those interested in the Underground Railroad will also be interested in Sarah’s clever way of disguising maps to freedom.

Author Information: I was delighted to see that Sarah McCoy was going to be in Massachusetts on her tour for The Mapmaker’s Children and caught up with her at the Brookline Booksmith in May when she appeared with Jenna Blum (a writer whose work I look forward to exploring). It was so much fun to hear how her upbringing in the South has informed her love of history and her ability to convincingly evoke a Civil War setting and heroine. In common with other readers, I loved the characters of the Hill family, especially Freddy Hill, who is a perfect combination of handsome hero and loyal friend. As little is actually known about Sarah Brown, McCoy walks a careful line between factual information (such as her artistic talent and the time spent being educated with the Alcotts in Concord) and the fictional information necessary to craft a novel. I yearned for a happy ending that would not have been supported by what is known about Sarah.  For more information on author Sarah, please visit her website. 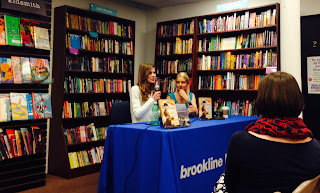 Because I am usually more interested in the English Civil War than the American Civil War, I did not know much about John Brown (except the doleful song) and surprised Sarah by asking how he became so associated with the Harper’s Ferry plot when he was from New York (I am still astonished that he would bring his family down from NY for the proposed raid, putting them in grave danger, but I suppose it is not so different from those who picnicked while watching the battle at Bull Run). Hearing about her research was fascinating. In turn, she was pleased to hear that I and others in the audience immediately started reading more about John Brown after we finished reading, and she told us that is a great compliment to the author to know she has inspired that much interest in the period.

Giveaway: Thanks to the generosity of TLC Book Tours and the publisher, I have a copy to give away.  US and Canada only, please.
a Rafflecopter giveaway

Source: I received this book from TLC Book Tours but all thoughts and opinions are my own.  You can visit other stops on the tour by clicking here.  I bought an earlier book, The Baker's Daughter, at the event and look forward to reporting on that soon.
Posted by CLM

Just started this! Thanks, C!

I love getting to hear an author speak about a book I've enjoyed - it's definitely a treat!

I am on vacation and will try to download this - sounds good - normally, I like Tudor fiction the best. M