Through the Evil Days by Julia Spencer-Fleming 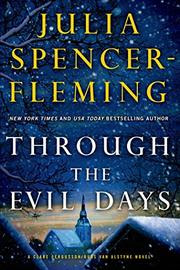 Plot: In the tense and emotional eighth book of the series, Chief of Police Russ Van Alstyne and Reverend Clare Fergusson are finally married but their lives remain professionally and personally complicated.  Clare is pregnant (as we learned at the very end of the last book), Russ is unhappy about becoming a parent at what he considered his advanced age, and a fire and related kidnapping threatens to derail their postponed honeymoon.  In the meantime, Hadley Knox, a relatively recent addition to the Millers Kill police force, is somewhat regretting having blown off coworker Kevin Flynn merely because he’s younger and she is getting over a bad divorce (soon she will have real problems!).   When Russ and Clare finally leave town for a week to “enjoy” an isolated cottage convenient to ice fishing (my idea of hell), they find the criminals are hiding out nearby.  Marooned by bad weather, Russ and Clare are caught between old rivalries and new enemies. 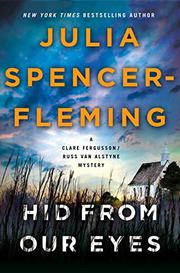 My Impressions: Despite the fact that Julia Spencer-Fleming is one of my favorite authors, I somehow had been saving this so long for a special occasion that I hadn’t read even read it! (I suspect my mother borrowed it and did not return it promptly but it is nice that she and my sisters and I all like this author so much.)  I reread One Was a Soldier to get in the mood – that is really exceptionally well done with flashbacks that advance the plot instead of exasperating the reader (a pet peeve) and vivid characters.   While I enjoyed this one, I had a hard time following the plot and need to reread it to fully grasp what was going on.  Russ is a pain for most of the book but I especially like Hadley and Kevin and was hoping things would work out for them: great cliffhanger ending!


One advantage of waiting this long to read Through the Evil Days is that her new book, Hid from Our Eyes, is coming out in April!   I had missed the sad news that Ms. Spencer-Fleming lost her husband in 2017; I am sure that getting back to writing after such a loss is much harder than simply going back to an office, so I am glad she was able to finish a new book and I hope it was a good distraction for her.

This is the tenth of twelve books that are part of my 2019 TBR Challenge, inspired by Adam at Roof Beam Reader, to prioritize some of my unread piles.  Two more to read by the end of the year!

Off the Blog: Merry Impeachmas!

Source: I highly recommend this series but do suggest you begin at the beginning with In the Bleak Midwinter.  My mother and I enjoyed meeting Julia Spencer-Fleming at the Brookline Library several years ago and I thus own an autographed hardcover.  She told us her daughter was studying for an MLIS at Simmons, making a tough commute down from Maine.  My mother, a (retired) librarian, sympathized as she commuted to URI while earning her library degree.
Posted by CLM

I had to come visit you after reading your fascinating comment on Frances Parkinson Keyes. And then I smiled at your blog name, having once written a post on the subject as it is so frustrating to lie awake and think of things I wish I had said. And then to find you are a book lady! And as your "truer words" quote states, I can tell from exploring your blog and reading recent posts that we have some beloved authors in common, D. E. Stevenson for one, meaning I must come again!

I've written down Julia Spencer-Fleming's In the Bleak Midwinter, thank you for the possibility of a new mystery series I might love!