Six Degrees of Separation: from Sanditon to Mrs. Tim Christie

Sanditon, the unfinished Jane Austen, was Kate’s starting book. I read this long ago and unfortunately don’t remember it at all.  However, I am looking forward to the new dramatization on Masterpiece Theatre beginning January 12, 2020. 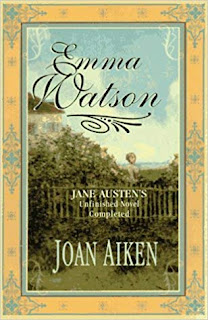 Joan Aiken came to mind because I thought she had completed Sanditon, but "her" Austen is Emma Watson, The Watsons Completed, which is my first book (not to be confused with actress Emma Watson!).  She also crafted several elegantly written books about Austen characters long before everyone was doing it!  Of course, Joan Aiken is best known for her children’s books, beginning with The Wolves of Willoughby Chase.   I met her once in New York, which is a cherished memory.  I am so glad that Joan's daughter Lizza Aiken is actively managing her mother’s estate.

My second book is by Joan Aiken’s sister (my mother and I always wondered why a poet like Conrad Aiken would give his daughters what is essentially the same name), Savannah Purchase by Jane Aiken Hodge.  This is my favorite of all her books; it’s a historical romance about identical cousins.  Don’t you love an impersonation story? 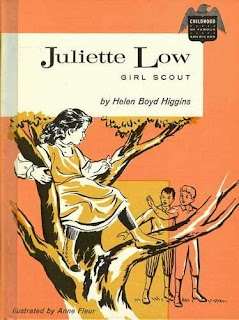 My third book is Juliette Low, Girl Scout from the Childhoods of Famous Americans series.  Do you remember these books? They have been repackaged since my childhood but I managed to find the cover I remember.  Low was from an affluent Savannah family, unhappily married, and a chance meeting with British general Robert Baden-Powell, the founder of the Boy Scouts, led her to help found a similar group for girls, which became the Girl Scouts in America.  As a former Girl Scout, I have always enjoyed stories about Low and wish I'd had time to visit her home when I was in Savannah!

The fourth book is a summer camp story, Sal Fisher at Girl Scout Camp by Lillian S. Gardner (1959).  This is a three-book series that I found in my grade school library.  My favorite was when Sal went to Girl Scout camp, full of girls learning life lessons, hikes, cookouts, and fun (although preserve me from actually going to overnight camp; much better to reach about it).

It is literally freezing outside and warm weather is a distant memory but my fifth book is Star Spangled Summer by Janet Lambert. This was my favorite series when I was growing up and I did some pretty crazy things to collect all 54 books by this author.  Set just prior to WWII, it’s about Penny Parrish, a teen who invites lonely Carrol Houghton to spend the summer with her lively army family.  Naturally, this changes both their lives and many books follow (now back in print from Image Cascade).  The description of military life was fascinating to me, especially in later books when they live near West Point. 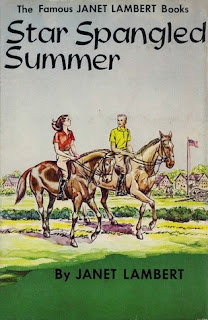 Finally, my sixth book is Mrs. Tim Christie by D.E. Stevenson, set in 1934.  Life is a series of misadventures for this attractive and charming heroine, married to a British army officer and trying to manage on a budget (her "frugal lifestyle" includes boarding school for the son, a cook, and a maid, but that was the era).  I am rereading this currently because the three sequels – Mrs. Tim Carries On, Mrs. Tim Gets a Job, and Mrs. Tim Flies Home are back in print from Furrowed Middlebrow and Dean Street Press.  Also, I recently read Diary of a Provincial Lady for the first time, which was written about ten years before Mrs. Tim and is clearly influential.  But I think Mrs. Tim is much funnier! 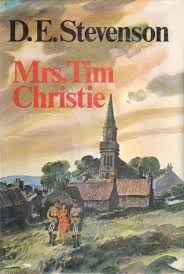 I recommend this series if you like to laugh out loud while you are reading.  Several of my other favorite DES books are now back in print: I need to complete my collection!

Off the Blog:  I saw the Moby Dick musical tonight at the A.R.T.   It was good (although too long in the middle - die already, Pip!) but it took an hour and a half to get home on the subway and bus.

See you next month, if not before!

I did not find the Provincial Lady very funny so I'm happy to know there's an alternative!

Very interesting chain! I don't know any of these books!

I’m not familiar with any of these books, though I was a girl guide, and my three youngest (1 girl, 2 boys) all attended Scouts for several years.
Thanks for sharing your chain

Joan and Jane? That does lack imagination! :-D

Thoroughly enjoyed your chain, and am particularly interested to hear about DE Stevenson. I have, but haven't read, Diary of a provincial lady, but am looking for cheery books for my 90 year old mum. I think I'll check these out.

I read several of the Penny Parrish books growing up, including Star-Spangled Summer, having found a cache of my mother's YA novels at my grandparents' house. I quite enjoyed them. Thanks for reminding me about them!