The American Heiress by Daisy Goodwin 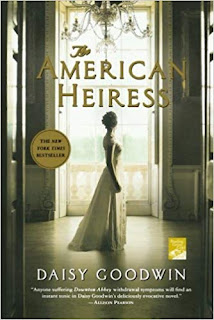 The American Heiress is the ninth of twelve books that are part of my 2019 TBR Challenge, inspired by Adam at Roof Beam Reader, to prioritize some of my unread piles.  I have another one read but not yet reviewed and two more to read by December 31st.  Can she do it?

Plot: Cora Cash is the beautiful daughter of an affluent and ambitious mother, who wants English nobility for a son-in-law.  Following a glamorous (although marred by a fire) ball in Newport, Cora leaves behind her local admirers and heads to England with her mother and her shrewd black maid, Bertha.  Conveniently, Cora immediately encounters a very eligible bachelor, the Duke of Wareham, who is high on pedigree but low on cash, and unenthusiastically recognizes an opportunity when he sees one.  The reader, if not Cora, anticipates the obstacles in the way of turning a marriage of convenience into a relatively happy union (condescending servants, jilted lovers, shrewish mother-in-law, poor heating) but there is more to Cora than desire for status.   Cora slowly learns how to defend herself and begins to figure out what she needs to do to master her new position, act befitting a duchess, and cope with her moody husband in what turns out to be an entertaining novel.

My Impressions: By chance, I happened to read two books called The American Heiress close together and this one, although enjoyable, suffered a little in comparison to the one by Dorothy Eden, which is also about a rich New York heiress determined to marry into the English nobility.   The difference is that Eden’s heroine is actually the maid and half-sister of the heiress.  When the real heiress and ambitious mother go down with the Lusitania as they head to England for the wedding, Hetty begins a dangerous masquerade.  Like Cora, she is tormented by her mother-in-law, snobbish servants, and a jealous ex-girlfriend of her new husband but somehow the story is more fun and more suspenseful.  Still, both Cora and Hetty have to muster their wits to cope with their new lives and in each book that is the most interesting part of the story, as we have seen plenty of Newport parties and drafty English house parties elsewhere, haven’t we? 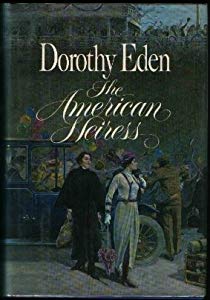 Sadly, Cora has little loyalty to her maid Bertha, who accompanies her to England, despite suspecting she will never see her family in the South again.  Bertha is not treated well by the English servants and she is lonely except for the friendship of the Duke’s manservant. Bertha yearns for independence and security, and suspects her days with Cora are numbered because the Duke resents her possible influence on Cora, so tries to save her wages so she can one day have her own business.  This is an interesting contrast to Cora, who may not be thrilled with her husband but cannot seem to imagine a future without a man.  Her parents, having bought her the Duke with a generous dowry, are not interested in any dissatisfaction she may have with her bargain.

Off the Blog: I am making deviled eggs for the OWD holiday party, which I now wish I had done last night!   My friend Barb suggested a clever way to get them out of the shell by shaking them in a jar with a lid: of course, I cannot find a jar that is suitable.

You could always use a large tupperware instead of a jar, no?

I have read both of these as well, and enjoyed them both. I noted that Dorothy Eden's novels have stood up well over time. I must say, though, that I really liked the Daisy Goodwin novel, and I didn't find that it suffered in comparison to Eden's. But I must say that I was not overly impressed by Goodwin's novel about Queen Victoria. It's all a matter of taste, though, and not anything that I could debate, by any means. I've read all of Goodwin's novels and have enjoyed them all, I will say that.